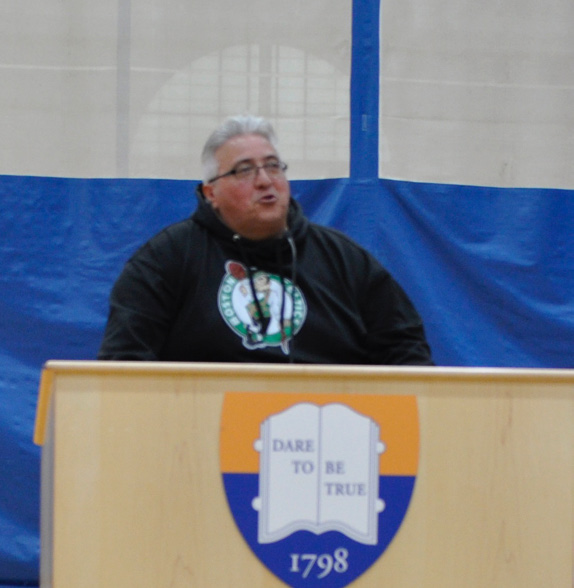 Over more than three decades as a sports journalist, Danny Ventura has covered high school matches, college championships and history-making professional sports events, and athletes at every level have left lasting impressions on him, he told students. Mr. Ventura has worked for the Boston Herald for nearly 30 years. In addition to his Sweet 16 football rankings, Mr. Ventura also writes a weekly “Around the Horn” baseball/softball notebook, the “In the Paint” basketball notebook, and a “No Holds Barred” wrestling column. His “High School Insider” blog was the first of its kind in Massachusetts. He has been honored by the Massachusetts High School Football Coaches Association as well as the Massachusetts Basketball Coaches Association. A winner of the prestigious Fred Ebbett Award of Distinction by the MBCA in 2004, as well as the David C. Weidner Media Award from the Agganis Foundation in 2007, Ventura was inducted into the state Wrestling Hall of Fame in 2011.

“For a lot of pro athletes, it’s a job, and they treat it like work. It’s very refreshing to cover sports at the high school level because the vast majority of kids are doing it for the love of the game.”