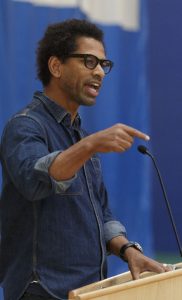 “As journalists, our integrity is under assault,” said Touré, who hosts The Touré Show podcast. “Media people are deeply aware of the importance of trust; we are the cornerstones of democracy. Media people are obsessed with getting to the truth. These are people of high integrity and they take their duties seriously.”

Touré discussed his time at Milton and his rising activism at Emory University, where he started a black student newspaper. He told stories about getting his start as an intern at Rolling Stone magazine, eventually becoming a writer for numerous publications covering a wide range of artists from Eminem to Kanye West, Zadie Smith to Jay-Z.

“In my career it’s always been about truth, particularly adding complexity to black people. Giving them a voice to talk about what makes them amazing — their genius and the tactics they took to get ahead in life.”

Not one to shy from controversial topics, Touré, who has hosted various television programs, discussed what is happening in the media today — for example, how Fox News compares to MSNBC.

“The right-wing media give untrue information,” said Touré. “They lie to their audience all the time. This leaves their followers unable to understand reality. These are people pretending to be journalists, but they are propagandists.”

Touré said one fault of mainstream journalists is they don’t want to be perceived as biased or unfair so audiences get “false equivalence,” where two sides of a story are presented as equal, even when they are not. Touré cited news stories on President Obama’s birth certificate, where both sides were given equal play in the media even though only one side — he was born in Hawaii — was a factual truth.

“This is why the mainstream media had trouble covering the rise of President Trump. Even though he was speaking untruths, the media, for a long time, restrained from saying the L word,” Touré said, referring to lies. “They didn’t want to be seen as biased. It’s hard to have your industry denigrated all the time by the president. But the media need to continue to be as dogged as possible to pursue the truth.”

During the Q&A following his talk, students had a range of questions, particularly about the “divide” between liberals and conservatives in the United States, listening to both sides and whether Touré was espousing the “silencing” of one side. Touré answered, “We shouldn’t silence one side and we can’t. It’s not about silencing but reconciling. I would appreciate a more truthful dialogue.”

The Sally Bowles ’56 Keynote Speaker Fund fulfills the wishes of Sally’s family and friends that speakers come to campus who reflect the intellectual curiosity and rigor that marked Sally’s pursuits, as a student and a professional. Sally was focused on big, bold ideas affecting millions of people. She was on the team that developed the Peace Corps; she helped decentralize New York City public schools; she was the director of Medicaid; and ran Connecticut’s welfare programs. Over time, and thanks to this Fund, students listen to varying perspectives on issues critical to the health of society in the United States and around the world.

Twenty-two other experts and activists followed the keynote address, covering a wide range of publicly debated domestic and international issues. Among many topics, students could choose to learn about progress and challenges in pediatric cancer care; democracy in the Middle East; children living in homelessness; the plight of young immigrants; the value of investing in social progress; and the placebo effect in genetics. Many Milton Academy graduates and several parents were among the guest speakers, stimulating great questions and discussions.

Called the Keyes Seminar Day, this lively event has been one of Milton’s most important traditions since 1977. It is named in honor of its founder, former faculty member Peter Keyes, a legendary promoter of student interest in the political process as well as public and governmental affairs and service. In the Milton spirit of developing students’ confidence and competence to live by our motto, “Dare to be true,” Seminar Day brings to campus individuals who have made compelling choices. They are scholars, business people, scientists, educators, writers, political leaders and artists making a difference in the world.