The Lam Siblings: Life in Bloom 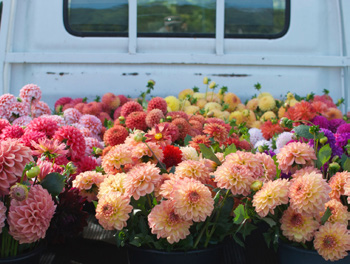 On a cold, windy afternoon in late spring, Grace Lam ’05 crouches down to show off a patch of tulips still nestled in the ground in one of Fivefork Farms’ seven greenhouses. Grace and her brother Lyh-Hsin Lam ’03 have been up since 5 a.m., harvesting and selling their flowers at farmers’ markets around the Boston and Worcester areas.

“Even if I picked something that looked like this,” she says, her palm cupping a tulip in full bloom, “I’m pretty sure it will last just as long, if not longer, than one picked green and tight. Since we don’t need to pick the flowers to ship in boxes, we allow them to mature and develop more intense colors before we harvest them. Many grocery store flowers are harvested days, if not weeks, before you even see them in the store. If you’ve experienced flowers that never open fully, it’s likely because they were picked too early in order to be shipped across the country or world.” 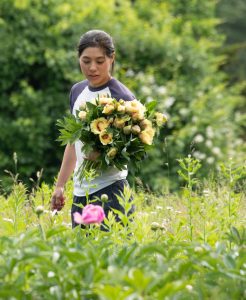 This level of confidence about the flowers they spend many hours planting and tending comes from experience. Grace and Lyh-Hsin recall their first year in business—in 2012, when the spring weather was unseasonably warm. Small deviations in weather can cause big disruptions to carefully planned schedules. “It was a freak 80 degrees out, and thousands of tulips were just opening up in front of our eyes,” Grace says, looking around the greenhouse. “We were overwhelmed. I was almost in tears.”

“We thought, ‘They’re open already, they’re too old, and no one is going to buy them,’” Lyh-Hsin remembers. “I think we ended up giving half of them away, which, in retrospect, was a huge mistake, because those did just as well. The flowers that were open, lo and behold, they still lasted a week.”

More recently, the opposite problem arose when a string of overcast days resulted in a greenhouse full of flowers refusing to bloom and a delay in the start of the spring season. This time, however, they were far more sanguine.

“One big lesson that we quickly learned,” Lyh-Hsin says, “is that oftentimes things are way beyond your control. I used to like having all the details covered before I made decisions. Something like this, though, quickly teaches you, you can have the best-laid plans—plans A, B, C, and D as backup—and it can all fall apart.

“It’s actually liberating, in a way, when you know that you can try your hardest, know you’ve done your best, you’ve planned and put in the time—and sometimes it still doesn’t work out.

“And that’s OK,” he says. “You know they’ll bloom eventually.”

Located in Upton, Massachusetts, just over the Worcester County line, the farm’s 38 acres of open fields and gentle hills produce an abundance of flowering plants from spring through fall—peonies and tulips to hyacinths, ranunculus, and dahlias. Its greenhouses extend the growing season through the winter months.

For years, Grace had thought about running a vegetable farm (her senior project at Milton was operating a vegetable stand on Centre Street in front of Cox Library), but the reality of earning a living kept that dream tucked far back in her mind. After graduating from Emory University, she worked in New York City at the financial services firm J.P. Morgan as an international equities sales trader. Although her job offered financial stability and independence, she says, she would sometimes ask herself, “Do I want to do this for the rest of my life?”

In 2012, following the Great Recession, when J.P. Morgan conducted a round of layoffs, Grace decided the time was right to act on her dream. She returned to Massachusetts, first working at Dragonfly Farms, an organic vegetable farm in Pepperell, to see “if I actually wanted to do this.” She decided she loved it.

Her next step was to seek the counsel of her close-knit family: her parents, Daniel and Helen Lam, and siblings Lyh-Ping ’98, Lyh-Rhen ’99, Lyh-Hsin, and Joyce ’05. 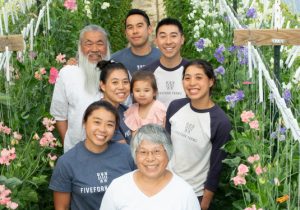 Gathered together recently at Fivefork Farms, the family recalled those early discussions. “We threw ourselves into it,” said Lyh-Rhen, who now serves as director of visual and merchandising for Boston-based Tatte Bakery. “We had a sit-down and asked, ‘In what way can we all pitch in and support Grace in this career change?’”

Grace was initially planning to farm vegetables, but one of the first pieces of family advice was to shift the business concept to flowers. “I actually credit Lyh-Rhen with suggesting flowers,” says Joyce, Grace’s twin sister, who oversees the farm’s finances and is a director in the investment banking division at Citigroup in New York City. Lyh-Rhen had worked for several years at Winston Flowers in Boston and was able to persuade the others that an underground movement toward sustainable, locally grown flowers was gaining traction and was the best direction to take.

“We liked the fact that customers were ready to embrace the concept of flowers that are grown half an hour away and that were harvested yesterday morning,” Grace recalls. “We liked that people were more cognizant of the carbon footprint—that they seemed to value that.”

They experimented that first year by planting a flower garden in their parents’ backyard in Randolph. Soon they began looking for property. They found what they wanted in the town of Upton on land once farmed by the Eli Whitney family.

The inspiration for the farm, the siblings say, can be traced back to their parents. Their mother, who was born in southern China, kept a garden behind their home in Randolph that each sibling helped tend while growing up. It taught them not only gardening skills, they say, but lessons in sharing and helping others.

“The reason my mom would grow a lot of vegetables was not only because she had a lot of mouths to feed,” Grace says, “but because of the elderly people she worked with at the senior center, especially those in the Chinese community who could only get the vegetables they liked in Chinatown. They couldn’t drive to get there, so she would grow all these Chinese vegetables and just give them away.”

Their father, a Cambodian refugee who fled the Khmer Rouge in the 1970s, came to Boston in 1980, first working in a Chinatown health center and later as director of the Massachusetts Office for Refugees and Immigrants in Governor Michael Dukakis’s administration. He also volunteered his time and advice to immigrants who were new to the Boston area. “We grew up watching our parents, who always had a way of serving other people, whether it was my mom volunteering at the senior center or my dad working with the immigrant community,” Lyh-Hsin says. “They were a real example and they still are.”

The parents, who still live in Randolph, continue to be active in Boston’s immigrant community. They also remain connected to Milton, serving as host parents to boarding students from Hong Kong. “After all of us kids, you’d think my parents would finally want some peace and quiet,” Lyh-Hsin says, “but I think they must enjoy all the activity.” 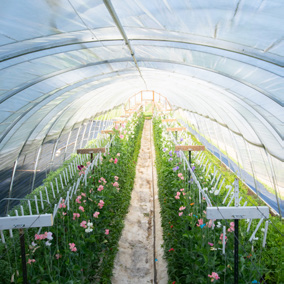 It was their parents’ example and the values they lived by that brought the family together seven years ago and that keeps the siblings involved today in the running of Fivefork Farms. As Grace and Lyh-Hsin, who both work full-time at the farm, continue to refine their skills, the meetings have become less frequent. Still, the other siblings continue to contribute according to their individual expertise.

“I don’t know if we could do this without social media,” says Lyh-Hsin, who before joining the farm full-time worked for Habitat for Humanity Greater Boston. It is not at all unusual, he says, to be conferring with one or another of his siblings by text or video chat while working in the fields harvesting flowers.

“What I think is most important for us now as a family,” says Lyh-Ping, who helps with branding and product marketing and who works full-time as director of oncology clinical development operations at bluebird bio in Cambridge, “is knowing how best to help. Even though Joyce is in New York City, she’s taking care of a lot of the finances, and that has been a god-send. And Lyh-Rhen is involved in the styling and the visual aspects. These are jobs that don’t require us to be here.”

From early spring until late fall, Fivefork Farms offers flowers directly to its customers through a CSA (community-supported agriculture) program, with 15 pickup locations throughout the Boston, Cambridge, and Worcester areas. They also sell to florists, designers, and retailers, shipping flowers across the Northeast.

Over the years, the CSA program has grown from being a small part of the enterprise to representing a significant segment of the business. “We were the first flower CSA,” Helen says proudly. “It is not the side product of a veggie farm; it’s all we do.”

“The vegetable CSAs have always existed,” Joyce adds, “so we thought, ‘If they can do veggies, then we can do flowers.’” Today, the program boasts a three-season membership of 650 customers.

“I think we tapped into a market,” Joyce says. “That’s why it’s grown so much. We’ve seen the growth, and it is why we’re planning more CSAs in the future.”

During the growing season, their flowers are also available weekly at farmers’ markets in Brookline, Somerville, and Worcester. “People come to the farmers’ market just to talk to my dad,” who from the start, Grace says, has been the enterprise’s most ardent supporter.

“We are creating a community that supports sustainably grown flowers,” Daniel says, “and we provide flowers that are affordable. Through our work, we’re saying: ‘Enjoy beauty and a quality of life that is not only limited to people of means.’”

All things considered, the Lams believe in the importance of what they are doing; it’s what makes the long days worthwhile. “For me, with another job, you may have pockets full of money,” Grace says, “but with this work, where you’re pretty much bank depleted, there’s just immense satisfaction in living a life that reflects your values. I love growing things and I value my time. I don’t need to pay for a gym membership. This is my gym. I might gain 15 pounds in the winter, but then lose it all come spring. You’re doing something fun and working out at the same time.”

And finally, she values living a life that brings pleasure to others, helping to make their lives a little bit better. “I love going to the farmers’ markets where I bring joy to people,” she says. “The people who buy flowers say, ‘Oh, my God, I could cry. These are the most beautiful flowers.’ The flowers often rekindle a connection for them. They’ll say, ‘My grandma grew sweet peas’ or ‘I remember when we picked daffodils every March or April. Thank you.’

“The thank-yous reinforce why we work so hard.”