Cristina Rodrigues ’06, A Responsibility to Be Hopeful 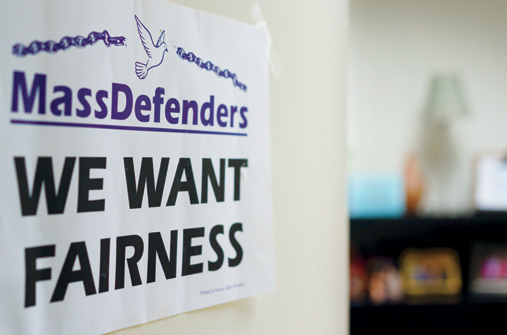 By the time a client meets Cristina Rodrigues ’06, there is usually a long trail of adversity behind them.

“More often than not, when someone is at the door of criminal court, there’s a story of a separate missed opportunity to intervene in their life,” she explains. “So for me, justice in the criminal setting is only possible with continued and increased investments in our shared responsibility for meaningful public education, affordable housing, health care — particularly mental health care — and trauma response in communities with high rates of violent crime.”

Cristina is an attorney with the Committee for Public Counsel Services (CPCS), a state agency in Massachusetts that functions as a public defenders’ office for clients who cannot afford legal representation. She works in the agency’s downtown Boston office and on cases in the Boston Municipal Court Central and the Dorchester and Chelsea district courts.

Attorneys in Cristina’s office average about 40 cases at a time, which she describes as “pretty low” in comparison with public defenders in other cities, whose caseloads can exceed 100.

Despite that workload, Cristina tries to understand the human realities involved in criminal cases. In some situations, a person has broken the law and will receive an appropriate punishment. In others, clients are trapped in a cycle of run-ins with a justice system that disproportionately affects already-vulnerable populations: people living in poverty, people with mental illness, communities of color, LGBTQ+ people, immigrants, and homeless people.

“I have always been interested in social justice and organizing, and the ability of communities to build up the power to change the institutions affecting them,” she says. “I also really enjoy direct representation, and even though it’s in this legal context, I love working one-on-one with people, and alongside them, to help them fight whatever struggles they’re facing.

“And so one of the things I love about this job is that both of those things are present. Whenever I’m working on a case, in order to do my job well, I have to connect with my client. If I’m going to be able to tell a compelling story about their situation, I have to know their story.”

A lot of her cases relate to the “war on drugs”: narcotics charges ranging from simple possession to small-time distribution to the sale of large quantities of drugs. Many of her clients suffer from mental illness. Many are homeless.

“A lot of what many homeless people do all day is illegal,” Cristina says. “In many respects, it’s illegal to live outside. Those can be desperate cases. I see a lot of trespassing charges, and shoplifting, too.”

So much happens on a daily basis in a city’s district courthouse that it can feel rushed and overwhelming. One of the responsibilities of a public defender is to slow the process down for clients and recognize the full humanity of everyone involved, Cristina says. It matters when decisions are made, from arraignment and bail hearings through the conclusion of a case; it matters even when the client is found guilty of a reprehensible crime.

One of her clients was being held on bail he couldn’t afford for a relatively minor charge, and was at risk of losing his Section 8 housing qualification because he was in jail — even though he was there without a trial or a conviction.

“I think of my job as more than defending clients against the specific charges,” Cristina explains. “One of the things I always hope to do in the process, regardless of what happens in the end, is to make sure that the individual’s human experience is recognized. The vast majority of people have reasons they’re in the predicaments they’re in, and the full context should be taken into account. I think when we do that, and do it over and over again in different cases, we are realizing systemic change.”

Asked about what justice looks like to her, Cristina quotes scholar and activist Cornel West: “Justice is what love looks like in public.”

“All of our constitutional rights and liberties, all of our privacies, are interconnected,” Cristina says. “And because those experiences are interconnected, you can never punish just one person. Every person has a whole community tied to them — children, loved ones, parents, and neighbors who are all affected by a person’s sudden and traumatic absence. When incarceration is involved, there is a very long, very serious list of civil consequences that stick with you for the rest of your life. Punishment and incarceration are necessary when the charges, facts, and evidence call for it. But we should not impose these things carelessly, excessively, or in a discriminatory manner.”

Justice, therefore, “in the context of the criminal system, would be when the system behaves in a way that openly and honestly recognizes its history, the country’s history, and the realities of different communities and people’s lived circumstances,” she continues. “It gives people a fair chance to raise a defense, regardless of how much money they have, and it doesn’t rush the process or assume guilt.”

Cristina’s interest in social justice comes from her parents, immigrants from Cape Verde, who raised her in Dorchester and Milton. An example of hard work and hopefulness, they encouraged her to have faith and excel, she says. They also showed her the reality of service, including the sacrifices necessary to serve.

“They are both very much engaged in their community and have always demonstrated an incredible amount of generosity,” she says. “And they have really stretched their limited resources to help as many people as they can. I feel really lucky that that was my example growing up.”

At Milton, Cristina was involved in community engagement and justice and equality work, which she carried with her to Brown University, where her interest in public service was nourished. After Brown, she attended Harvard Law School (HLS), where she got her first experience representing clients.

At the Harvard Legal Aid Bureau (HLAB), she worked in housing and handled eviction cases. There, her passion for direct client representation became clear.

“It’s incredibly intellectually engaging, because you’re solving a puzzle, examining the evidence, and putting together a story,” Cristina says. “You have to work really hard to gain the client’s trust to get their story from them, and you also have to reflect it back in a manner that the decision makers will respond to.”

HLAB sparked Cristina’s interest in legal aid, and as she advanced through law school, she learned more about criminal law. She describes being both disturbed by the country’s criminal justice system and drawn to its reform. Following HLS, Cristina clerked for U.S. District Court Judge Denise J. Casper, and then worked in the commercial litigation practice of a New York City law firm, where she handled antitrust cases and also did pro bono work on death penalty cases.

From there, she came to CPCS. She recently took a sabbatical from the agency to clerk for Chief Judge Jeffrey R. Howard in the U.S. Court of Appeals (First Circuit) and returned to public defense in the fall of 2019. Between her recent clerkship and return to CPCS, Cristina traveled to Colombia for a Spanish-language immersion program, and she continues to take Spanish classes in Boston in her free time, hoping to remove the language barrier with some of her clients.

Cristina intentionally celebrates “even the small victories in her cases,” and keeps records of motions and trials she’s won. The physical reminder of those wins is helpful on a hard day.

“I’ve also over time changed my definition of what a victory is, because it’s important to my own mental well-being and ability to sustain the work,” she says. “I can’t expect that every time I go to court, I’m going to win; that doesn’t line up with the realities of the position I’m in. But I consider it a victory if I have a day where my client feels satisfied with what’s happening, if they feel like we’re fighting.”

Cristina is often surprised by her clients’ resilience in the face of challenges. When they manage to crack jokes or share their personal stories, it’s a reminder of “the humanity at stake in this work.

“That even people in impossible situations and up against the full weight of the state still have the full range of human emotions is really inspiring,” she says. “It helps me a lot, because I think that people engaged in social reform have a responsibility to be hopeful.”