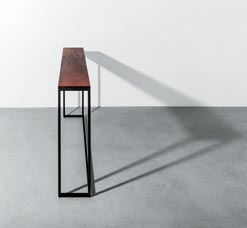 Uhuru Design, a multidisciplinary design firm based in Red Hook, Brooklyn, was founded in 2004 by Bill Hilgendorf and his business partner, Jason Horvath. Uhuru began as a high-end custom furniture design and build company with a focus on timeless, sustainable design. Over the past 10 years, the company has built a full interior-design division with high-profile projects in the commercial, residential and hospitality sectors.

A leading innovator in New American Design, Uhuru has pieces selected for display in the Smithsonian’s and Brooklyn Museum’s permanent collections. Uhuru offers clients and partners access to an influential global audience seeking a deeper connection with the products they use and the spaces they inhabit. This is evident in their creative reuse and repurpose in the creation of fine furniture and interior spaces.

Bill and Jason were recognized by the Smithsonian, featured as part of the museum’s 40 Under 40: Craft Futures for innovation in their field. Uhuru’s original Cyclone Lounger, fabricated from reclaimed Coney Island Boardwalk ipe, was acquired by the Smithsonian for its permanent collection. The company was featured in a 2016 New York Times piece titled “The Rise of the Locavore Designer.” Bill’s designs will be featured on campus in Milton’s Nesto Gallery in spring 2018.