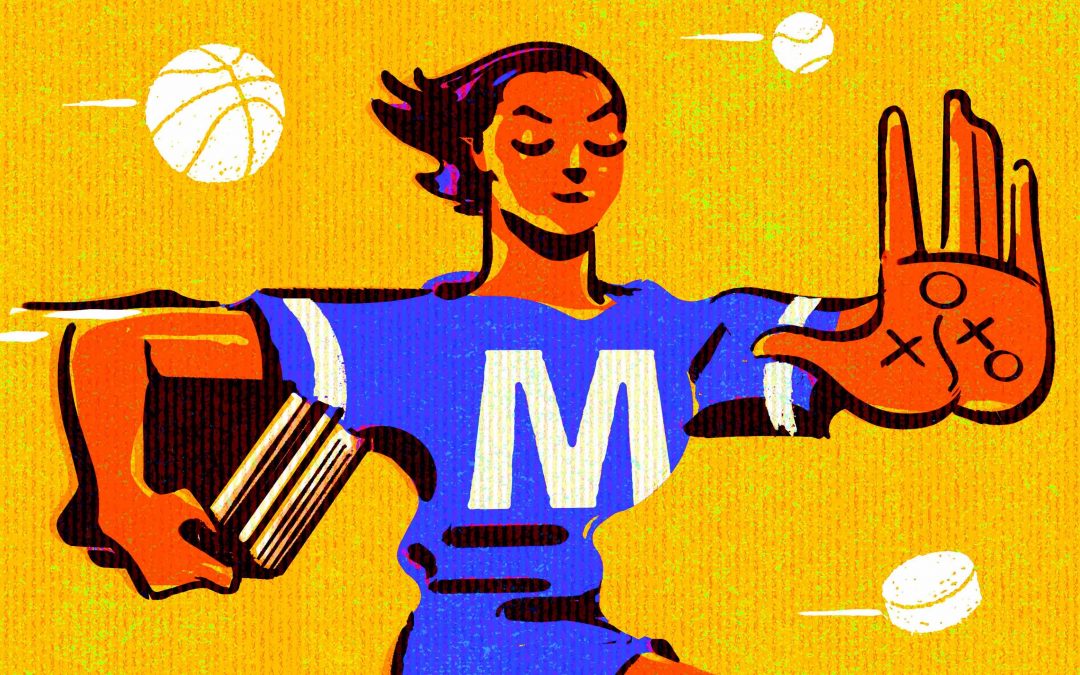 Coaches are Teachers Too

COACHES PLAY A CENTRAL ROLE IN A STUDENT’S EDUCATION

From his office in the Athletic and Convocation Center, Athletic Director Lamar Reddicks has a constant, daily view of the comings and goings of student-athletes, coaches, and visitors.

Whether they stop by his almost always-open door or are just passing through, Reddicks, who is also the head coach for the boys’ varsity basketball team, can get a quick read on them.

“I can tell by the way a kid walks through here whether they’re having a good or bad day,” he says.

Coaching at Milton involves much more than guiding students through physical training and technique. Many coaches teach or work on the staff at the school; others are dorm faculty members and advisors. Informally, they act as counselors, surrogate family members, and sounding boards on everything from academics to college selection to personal issues.

A Milton coach, first and foremost, must be good with kids, says Reddicks. Those who coach at the highest levels also have to be masters at their sports, but an ability to lead and relate to students is a primary qualification.

“When we have new hires, I have to explain to them how different Milton is compared with a lot of places,” Reddicks says. “Our kids are really smart. They have a lot of interests and other extracurriculars. So you might have a student who’s great at your sport, but they’re also great at something else that takes up a lot of their time. There’s a lot they have to balance.”

Cormac Ryan ’18 recalls a hard lesson Reddicks taught him about leadership. Reddicks pulled Ryan, now a captain of the Notre Dame men’s basketball team, from an early-season game against Governor’s Academy because of Ryan’s attitude toward the officials and Reddicks. Ryan was a rising star at the time, getting a lot of attention from college recruiters, and he complained that the referees weren’t being fair.

“The next day, Reddicks called me and the other seniors into the locker room for a meeting and said, ‘I’m considering taking away your captainship, because that’s not how a captain behaves,’” Ryan recalls. “‘If you want to be a leader, you have to act like a leader at all times, not only when things are going well.’”

Each season, hundreds of Milton students play a sport, whether they compete against other schools in Independent School League matches or play intramurally. Some of the more popular sports, such as soccer, offer opportunities for students to play at different levels, from freshmen teams to varsity. Chris Kane, head coach of the boys’ varsity soccer team, says that the high rate of participation gives coaches the ability to build a strong community around sports.

“The expectations we set for students around being a good person, working hard to improve, being selfless to the needs of the group, being a good communicator, resilience, inclusivity, and positivity are all qualities we try to develop through the game,” says Kane, who also works as the director of financial aid in the school’s Admission Office. “Those are all important qualities for students outside the athletic arena as well.”

Given the amount of time student-athletes practice, plus the travel time involved in away games and tournaments, a coach may be the adult a student sees the most, Reddicks says. It takes serious dedication on the part of coaches—many of whom work well into the evenings and on weekends during their seasons—so a team’s culture is critical.

“I spend more time in the winter with the kids on the basketball team than with my kids at my house,” he says. “That’s real, and that’s not a small thing. So it’s really important to me that they’re good kids, and that we build a strong foundation.”

Coaching mirrors other aspects of education at Milton, says Kane. Teachers place a strong emphasis on markers of a student’s growth over the course of a class; coaches want to see similar growth over a season.

“We try to frame our accomplishments around growth and improvement rather than outcomes and end points,” he says. “We use soccer as a means for development, professionalism, commitment to the collective group, honesty about strengths and weaknesses, and thoughtful planning as you seek to improve. Those are the qualities that I think are most essential to success in soccer but are even more beautifully key factors for success in other parts of life.”

Kevin Macdonald, head coach of Milton’s varsity football team, has worked with dozens of coaches over the years, many of them former athletes he coached, and many who are classroom teachers.

“I think coaching and teaching are one and the same,” says Macdonald, who has coached and taught at Milton for 27 years and plans to retire after the 2022 season. “Some of the best teachers I’ve known have been outstanding coaches and vice versa.”

Rachael Abernethy, an English teacher and assistant coach for girls’ varsity soccer, wrote her master’s thesis on the ways in which coaching soccer informed and shaped her English teaching practice.

“I was studying authentic assessments and learning how you can do little things in your classroom to make your students feel known, and seen, and valued, and then to prioritize what they want in their learning and assess them in a way that matches that,” Abernethy says. That focus on fundamental skills along with individualized development helps athletes grow as well.

When recruiting football players, Macdonald looks closely at their grades. Milton’s academic demands—combined with the time it takes to compete at the varsity level—mean that students have to work hard in their classes as well as on the field and in the gym.

“I’ve always hated the stereotype of football players as dumb jocks,” says Sam Jaffe ’22, one of the captains of the 2021 varsity team, which won the Independent School League championship and was undefeated in the regular season. “I’ve done everything I can to flip that narrative about myself and my teammates.” Jaffe’s teammate Luke Thorbahn ’22 says playing football has been a way to get access to good schools: “I was able to use the game I love to get an education that will last a lifetime.”

For high-achieving people like Milton students, sports provide necessary exposure to failure and loss, says Kane. An athlete can do everything technically correctly, can practice and improve over long periods of time, and still lose. Coaches play a critical role in helping students learn from those moments. “Sometimes the best qualities you see in athletes come out in the moments where success does not happen,” Kane says.

Abernethy agrees, saying, “I think it’s difficult to form a grounded sense of what it means to be successful if you have never failed.”

Developing athletes into good players comes with building their character along with their physical ability, says Amy Hickey, who is the head coach of girls’ varsity softball and also serves as assistant coach on the girls’ field hockey and hockey teams. Hickey has coached and taught physical education at Milton for two decades, and has witnessed some changes in how students approach athletics. As the college application process becomes increasingly competitive and students’ social interactions take place online and in real life, the time it takes to train for and excel at a sport becomes even more precious.

“It’s so important to have real connections,” Hickey says. “And when you’re on a team together, you have a deep connection, because you’re going through all this physical work—the blood, sweat, and tears—together. Our kids take on so much, and have so many commitments, and so, as a coach, I’ve tried to focus more on the player as a whole, looking at their whole personality, the whole spectrum of what they’re doing. We’re still setting goals, and we’re still trying to win games, but it’s really about getting the kids to reach their potential.” 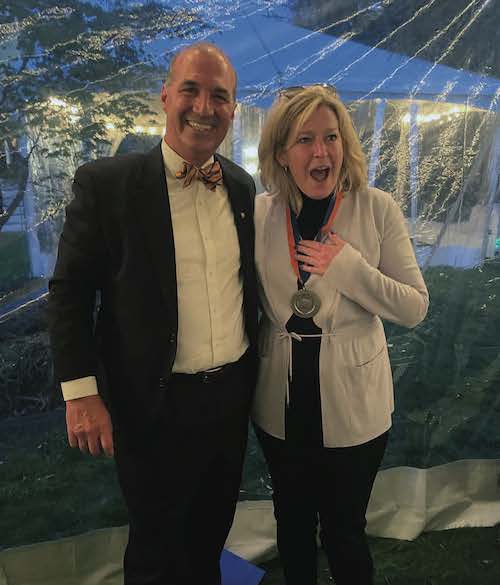 On April 30, the Board of Trustees honored its outgoing president, Lisa Donohue ’83, with the Milton Medal, recognizing her years of leadership and dedication during a significant period

of growth for Milton Academy. The Milton Medal recognizes extraordinary service to the school.

“Lisa’s incredible service to Milton clearly makes her deserving of this important honor,” said Board member Claire Hughes Johnson ’90, who succeeded Donohue as president on July 1. “Lisa served Milton during a critical period, and every time the school needed more from her, she increased her level of time, energy, and dedication to Milton’s success. Although Lisa credits Milton for its positive role during a formative time in her life, what is most impressive is her ability to separate the Milton of the past from what the school and the students most need today.

Constantly guided by what’s best for the students, Lisa set an example for all of us.”