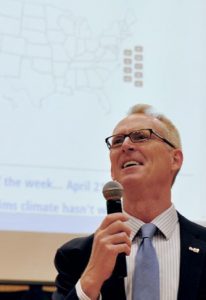 A revenue-neutral reduction in carbon emissions is within reach for the United States, former U.S. Representative Bob Inglis told students. He says that achieving it, however, will require politicians who deny mankind’s effects on the climate to change their tune. Mr. Inglis is the founder of RepublicEn—a network of Republicans acknowledging humankind’s impact on climate change. He proposes a carbon tax that would provide financial incentive for manufacturers to lower carbon-dioxide emissions. When he publicly acknowledged the human influence on climate change, Mr. Inglis lost his congressional seat in a primary to Trey Gowdy, the Tea Party Republican currently representing South Carolina’s 4th district. Mr. Inglis was this year’s Earth Day speaker, sponsored by the student environmental group Lorax and the Sustainability Board.

“There are people who say that humans aren’t responsible for changes in the climate, but that is contradicted by the research and opinions of 97 percent of climate scientists. Frankly, we’d better hope that climate change is human-caused. If it’s human-caused, we can do something about it. If it’s not, we’re hosed.”