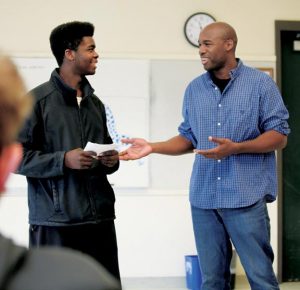 Beginning with a single suggested word from the audience, the 3Peat improv troupe rolled out a series of hilarious scenes for students in King Theatre. Five members of 3Peat, an acclaimed part of Chicago’s vibrant improv comedy scene, came to Milton as Melissa Gold Visiting Artists. They performed for and with students, held a master class in the basics of improv, and visited several classes, including improvisation and public speaking. 3Peat, which plays every Monday at Chicago’s legendary iO Theater, formed in 2012. The performers, who are all black, were friends and improv teachers involved in Chicago comedy but felt pressured to compete with one another for a limited number of parts in theater and television, which inspired them to form 3Peat.

“The student performers were way ahead of where I was expecting them to be. They didn’t hesitate to get up and participate. As a group, we don’t judge one another. It’s a space where you can feel safe to be silly and just have fun.”
— Torian Miller