Reaching New Heights, on a Bike 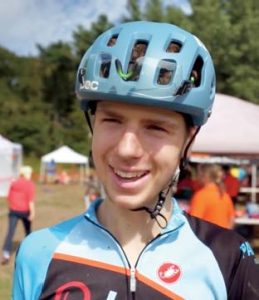 Clocking in at a minute over four hours, Chris Mehlman ’18 placed third out of 650 riders in the Vermont 50, a grueling 50-mile mountain bike race that involves an elevation climb of 9,000 feet. To put his amazing finish into context, the top two riders are well-known veteran winners on the mountain bike race circuit.

Chris says he started mountain biking in fifth grade, but didn’t start racing until his Class III year. He started with races in the New England High School Cycling Association. This led him to Back Bay Cycling Club (B2C2), a competitive cycling team based in Boston, where he has a coach.

“What I enjoy about biking is that it’s a big challenge both mentally and physically,” says Chris. “The training is hard, but I love having goals and something to drive me on. I also love how scientific biking is; it’s a nerdy sport. There is a lot of complex data in the training.”

Chris says the Vermont 50 is such a popular race, the 650 spots fill up in five minutes once the registration opens online. Another Milton Academy community member, Middle School Principal Will Crissman, an avid biker, finished third in his division.

As Chris starts the college search process, he is also thinking about his biking options for the future. There is collegiate cycling, but Chris says he “might want to continue cycling outside of college and see where I can get to.” In the summer of 2017, he competed in his first nationals in West Virginia and finished 19th in the country.