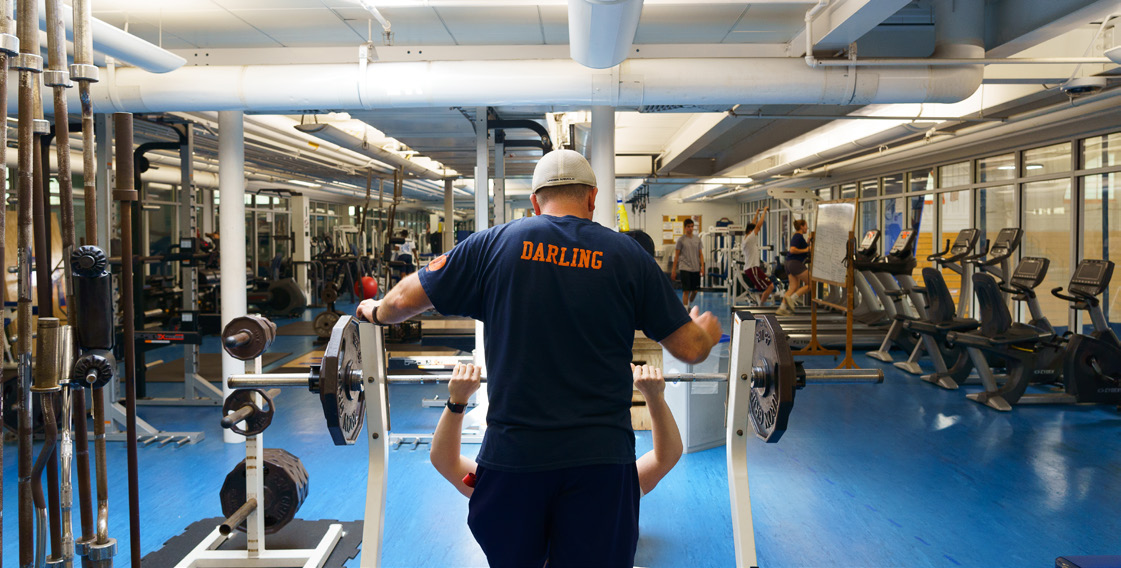 On an unusually hot and humid spring afternoon, assistant athletic trainer Nicole Hall stands on the sidelines and keeps a close eye on the girls’ varsity lacrosse game. She already introduced herself to the opposing team coach, set down water and a cooler of iced towels. Now she is laser-focused on the athletes, from both teams, watching out for collisions or hard hits, or if any player is limping or showing signs of struggle. Nicole notices one student wheezing when she runs off the field and goes to check on her. Fortunately, that’s the only action needed from Nicole today.

Milton has four certified athletic trainers — Larry Fitzpatrick, Nicole, Cameron Larocque and Steve Darling, who also serves as the School’s strength and conditioning coach. During home game days, they spread out across campus, each covering different games based on injury risk level. They put in long days and their responsibilities are wide-ranging: taping and prepping athletes before practices and games, icing and assessing after, teaching physical education courses, dealing with insurance paperwork, communicating with concerned parents both near and far, making sure athletes follow physical therapy regimens, and dealing with on-field medical emergencies. For students who live on campus, the trainers drive athletes to doctor appointments or sit by their side when they wake up from surgery. All four trainers say their most important role is just being there for the student-athletes.

“When I was younger and started in this field, I was really focused on injuries and understanding them, but over time I realized that was not how I wanted to practice,” says Larry, who is the head athletic trainer. “Knowing the student is most important because it allows me to understand their injuries better. Developing that relationship and trust is paramount. The relationship is first and the injury second. I like to talk to kids and see what makes them tick. Milton can be challenging at times, and I can easily tell when they’ve had a rough day. My words, I think, can help.” 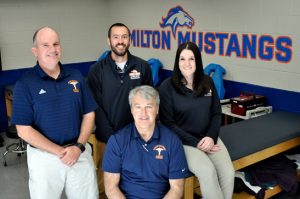 Milton provides athletic training services for students in Grades 6 through 12. The athletic trainers also make themselves available to staff and faculty. The training room is tucked behind the fitness center on the second floor of the Athletic and Convocation Center and the trainers are outgrowing the space. Since Larry started at Milton in 1980, the field of athletic training has changed tremendously as high school athletics transitioned from three-season athletes who played fairly low-key competitions to specialized athletes who play one highly competitive sport year-round, inside and outside of school.

“In our area, this trend leads to overuse injuries,” says Larry. “Trying to get kids and parents to understand that can be difficult, particularly because they believe this sport might be the hook to get into college. Most athletes started off playing because they are having fun, and somewhere along the line it becomes a big part of their identity. Some parents feel their child has the skill to play at a high level. They’re paying a lot of money to outside programs to try to get them to that next level.”

As the strength and conditioning coach, Steve Darling helps the athletes stay healthy; improve their flexibility, strength and overall aerobic fitness; and prevent these overuse injuries. All varsity athletes do in-season strength training workouts to help maintain their strength during the season and to aid in injury prevention. Workouts are before or after practice and focus on big movement exercises, such as squats and deadlifts. Steve also incorporates core strength and power movements along with a few isolation exercises to strengthen smaller areas.

“Teaching how to do the exercises correctly is the first priority, and once the athletes understand how to execute the lifts correctly, we then may test their strength and develop a periodization resistance program for the remaining weeks of the season. This allows each athlete to reach max strength in a safe and effective way,” says Steve, who has been at Milton for 16 years.

For athletes in an offseason, Steve runs a fitness and conditioning program the students nicknamed “Darling’s.” This runs in the fall and winter. In the spring he coaches track and field, where many athletes compete to keep up their conditioning. Although Milton has its share of high-level athletes, Steve says he enjoys working with athletes at all levels.

“I love seeing improvement in kids who put in the time and the energy, especially an athlete who isn’t as gifted as some, or who’s just starting to learn how to lift and gets frustrated at the start, but then after a few weeks feels more confident,” says Steve. “By the end of the program, they’re doing something they thought they’d never be able to do. I also love seeing kids succeed on the court or on the ice or the field, knowing their hard work and their consistency off the field was a big part of why they were successful.”

When an athlete is injured, whether in practice or a game, the athletic trainers are the first responders, but Larry stresses that the next steps and decision-making lie with parents.

“When a child is hurt, parents are in charge,” says Larry. “The majority of our kids are under the age of 18, so we can’t assume their health care decisions. It’s the parents’ prerogative on how they want us to move forward. We act as a vehicle to help them navigate the system and to get their child seen as quickly as possible during what can be a stressful time.”

Emailing and texting parents makes communicating easier than in the past. Trainers can make sure parents who are far from Milton are up-to-date on a daily basis. Trainers also work in conjunction with the nurses and director of medical services at Milton’s health center, as well as with an outside orthopedic consultant. If the injury is a concussion, Milton follows a strict protocol (using the ImPACT program) and the trainers work with the deans’ office if academic accommodations are necessary during recovery.

Following an injury or surgery, students can choose to follow their physical therapy regimen on campus, with Milton’s trainers. On campus, they can do PT four or five times a week, compared to the usual once or twice a week. However, for busy students, sticking to regimens is not always easy.

“One of the most challenging aspects of dealing with athletes this age is noncompliance,” says Cameron, who worked with college athletes before coming to Milton. “You tell kids one thing and they don’t listen and go off and do the other thing. Or you know someone is hurt and not playing for Milton, but they still go and play their out-of-school athletic event. Then they come back the next day complaining of the injury.”

Nicole agrees. “When they are here working out or competing,” she says, “we can tell coaches what to look for regarding their injury and we keep an eye on them. It’s the sports outside of school that we can’t control.”

Challenges aside, all four trainers express true joy in their work. Larry says it’s all about “helping them recover and getting them back out to do what they love.”

“Some situations with athletes who have had tough injuries have been trying,” says Cameron. “They are hurt and feeling down while also dealing with the rigors of academic life. Seeing them get back, feeling 100 percent again, happy and succeeding, makes everything worthwhile. It’s awesome. I can’t really describe the feeling other than that way.”