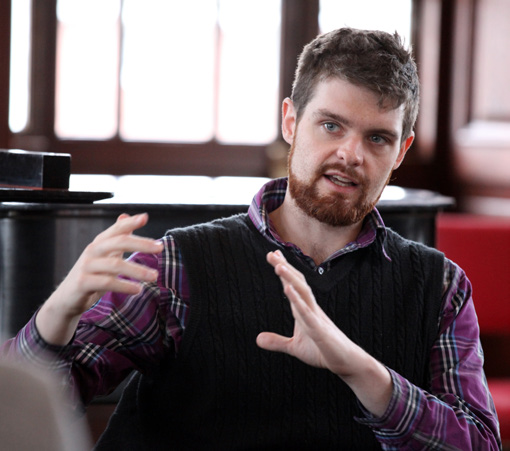 News coverage from heavily patrolled conflict zones in places like Syria can have wildly different angles, depending on the sources of information — and which international power has control over the sources, said James Bowker, an analyst and former journalist who has witnessed and tracked the shifts of power in Syria and the Middle East. Mr. Bowker was this year’s SIMA (Students Interested in Middle Eastern Affairs) guest speaker. Mr. Bowker attended Tufts University and studied abroad in Amman, Jordan, receiving his B.A. in Arabic language and Middle Eastern studies in 2013. He later worked in Jordan, facilitating study abroad programs, then as a journalist for a Syria-focused news website based in Amman. Since moving back to the United States in 2015, Mr. Bowker has worked in Washington, D.C. as a Syria researcher and analyst.

“Be very scholarly about the news, and investigate what is being presented to you as fact. It’s not just important to recognize biases, but to understand why they exist. False information and conspiracy theories carry a lot of weight in Syria because it’s a region where outside, international powers have had competing interests for so long.”