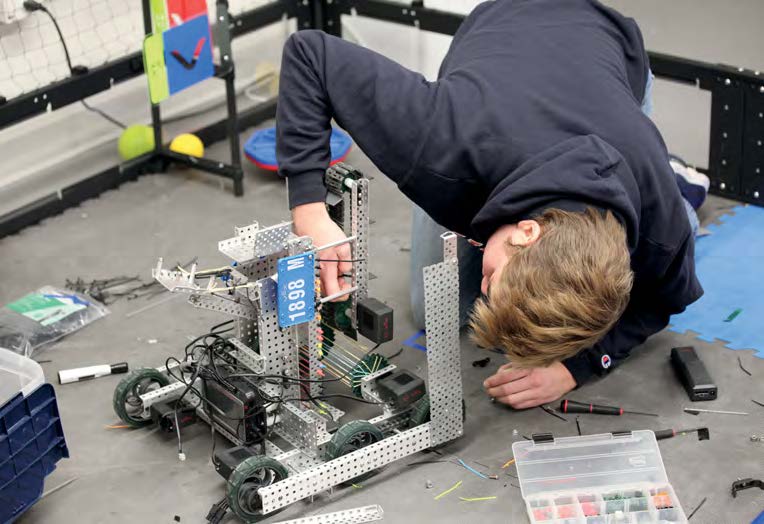 All three of the robots designed by Milton’s Robotics Club qualified for national and state tournaments this year, a testament to the club’s teamwork and collaborative spirit. Students are split into three teams, each competing with its own robot.

Milton Robotics is doing better than ever, says Alexander Shih ’19. “Our biggest success, though, is in our team dynamic,” he says. “We are working together, and the rookies are getting a lot of the experience they’ll need to start leading in the future.”

“The program has become more and more competitive,” says Chris Hales, club advisor and computer programming faculty member. “It takes a lot of time and a decent amount of knowledge. Robotics is an intellectual pursuit, and sometimes it can become a competition to prove how much you know, but that mindset is not accepted here. All ideas are welcome, and these students encourage one another.”

The club participates in VEX Robotics, which challenges students to design robots that will compete against others in a small arena filled with opportunities to earn points: lifting and moving objects, tagging flags, climbing platforms and other tasks. Competitors are judged on individual matches, overall performance, and design. 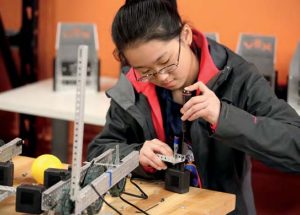 Each qualifying tournament offers students insight into the functionality of the robots they’ve built and a chance to assess what works and what needs to be improved.

“It’s a challenge to figure out what design we want to use, and we’ve changed it after each tournament,” says Avery Miller ’20. “We have a great time building together and sharing design ideas.”

At a fall competition in Framingham, Massachusetts, two of Milton’s teams paired up in the quarterfinals, where they were seeded sixth, and upset the third-seed team, a match that felt especially victorious to Christy Zheng ’19.

“That was a huge moment, because it showed us that we really are capable of producing robots that are just as competitive as the ones created by kids or schools that dedicate part of every day of their school curriculum to robotics,” Christy says.

Although Milton’s three teams compete individually, they plan and develop together. “There are people who are good at designing, programming, building and driving, and everyone ends up helping each other so that we move forward together,” Christy says.

This year is also the robotics team’s first in its newly expanded and renovated space in the Art and Media Center, which has provided an inclusive home for students who share a passion for robotics, and improved resources for collaborative work, which sometimes goes well into the evenings before competitions.

The students describe the new room as a major upgrade with better lighting and more room to work together, although Alexander does miss an old, dirty, broken-in couch that lived in the former space.