Ultimate Disc Team is Flying High in Its Second Season 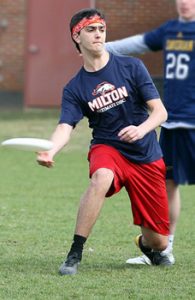 On a quintessential spring afternoon, the ultimate disc team warms up on Headmaster’s Field. White discs shoot back and forth as the players practice passing and wait for the return discs from their opponents. In the second year of an official intramural co-ed team, the majority of team members are new players. Coaches Martin McDermott and John Lee say Milton’s program is young compared with some of the more established school programs, but the students are having fun learning the game and improving with each practice and competition.

Alexander Shih ’19 is the captain and one of two seasoned returning players. “I like playing ultimate Frisbee because the whole sport is based around good sportsmanship and honesty, something called the ‘spirit of the game.’ It is the only sport I know of that is self-refereed. This is a testament to the honest and friendly people who play the game.”

Developed in the late 1960s, ultimate disc is similar to soccer in having the goal of moving the disc down the field in the air, and then into the end zone to score a point. The opponent can intercept or knock it down to stop the progression. The first team to reach 15 points wins. At practices, teams work on their offensive and defensive strategies; this is the area that Milton is focused on improving. Milton competes against a couple of ISL teams and also public high schools from surrounding towns.

“Most of the teams we are playing against will play us again later in the season,” Alexander says. “I am confident that we will show improvement from the beginning of the year. Everyone on the team is open to learning and working hard to become more well-versed in the strategies that we use in games. The biggest reason I enjoy playing on our team is because no matter how we are doing, everyone keeps a light attitude and we have fun. But at the same time, we are doing our best to improve.”