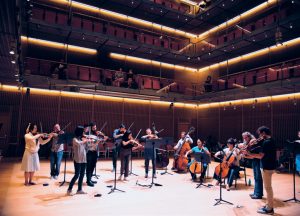 Strings players from Milton’s chamber orchestra watched members of A Far Cry, the Grammy-nominated string ensemble, discuss a few measures of a Haydn minuet during a pause in the action. One musician suggested a slight change to the speed of the melody as others nodded in agreement. Another chimed in with a reminder about the dynamics of a section. They started again, the adjustments made.

“The unique thing about A Far Cry is that they don’t use a conductor,” said Adrian Anantawan, Milton’s music department chair. “They’re a fully democratic orchestra, and they make decisions as a group. The leadership is shared.”

The Milton group visited an open rehearsal in the Isabella Stewart Gardner Museum’s Calderwood Hall, a modern, four-story performance space behind the historic Boston art museum. Students took notes as A Far Cry, this year’s Gratwick visiting performers, shared their insights and corrections to their piece.

The rehearsal was a master class, not only in classical music, but in deep listening and focused cooperation. Adrian hoped the encounter with world-class musicians would inspire the Milton performers and encourage them to take on a similar leadership style. During a break in the rehearsal, students formed groups according to their instruments and took the opportunity to ask questions of the professional musicians. Part of the reason for the visit was for the students to get to know the musicians better than a guest concert would allow, Adrian said.

“Our students are here to observe this process,” he said. “One of the pieces we’re working on is similar to a piece of music A Far Cry is doing, so hopefully we’ll be able to pick up on some of how they work and be able to apply that to our performances throughout the year.”

Milton students composed two pieces for A Far Cry that were performed at the 89th Gratwick Concert in October.