For Facilities Team, Athletics Work Is 24/7 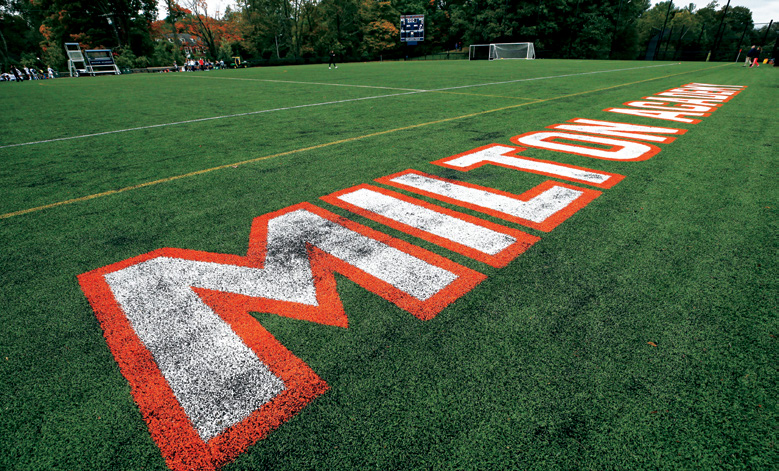 Ernie Ostine’s first day of work for Milton’s facilities department was on a snowy day in February 1978. It’s a story that Steve Zannino, associate director for grounds, events, and fleet management, likes to tell. Worried that it would not look good to not show up, Ernie walked to campus through the heavy snow from his home in Dorchester. He was stuck on campus for the next five days during what became known as the Blizzard of ’78. Forty-one years later, Ernie is the longest-serving member of Milton’s stellar facilities team, a dedicated group that keeps the campus humming. 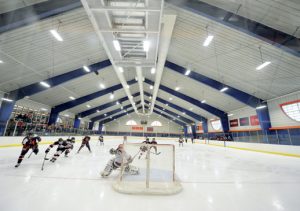 Manny Taveres, who has been at Milton the second-longest, is the foreman of the eight-member grounds crew. Tending the turf and grass fields is a main focus during the fall and spring sports seasons. The baseball fields require the most maintenance. Milton has wells to water the grass, so lack of rain is not a big concern, but a lot of care is still needed to keep the fields in good shape. They are aerated, seeded, and covered with a “top dressing” in a process that is repeated at least three times throughout the year. The mowing is constant — the crew maintains 35 acres of grass. Lines need to be painted, areas need to be raked, and sports equipment needs to be moved around or stored.

The Berylson Turf Field was installed during the summer of 2018. Steve was instrumental in making decisions to ensure that the field met athletic department expectations — especially for field hockey, because it’s the best surface for that game. Turf is also a great surface during inclement weather for all teams.

“The designer and installer were great,” Steve says. “They did a nice job blending it in with how the rest of the school looks.” The project also finished on time and on budget. Facilities crew members Andre King and Pete Henderson have taken a particular interest in the upkeep of the field, which requires a special machine to “lift up the flattened grass and groom the surface,” Steve says. “Some believe these fields are maintenance free; actually we must carefully care for and inspect the surface regularly.”

During the winter season, most of the crew’s focus is on the indoor spaces. The squash and basketball courts are swept and washed regularly, but most of the labor goes into the ice rink, which is not a year-round rink. In the warmer months, the rink space is used for indoor tennis courts. In October, the facilities team starts the process of turning those courts into a rink — a huge physical undertaking. First they install the heavy boards and glass. Then the coolant glycol flows through the rink’s underground pipes, and the crew lays down thin coats of water with a handheld hose, a process that can take hours. After a certain number of coatings, an outside contractor paints the lines and the ice white. This is followed by more layers of water before the ice is resurfaced by a Zamboni for almost two days to make it just right.

One of this year’s biggest projects was installing a new chiller system after the old one “lived its life after 22 years,” Steve says. Its demise unfortunately occurred in the middle of the night during the 2018–2019 hockey season, and the facilities crew had to scramble to get the melting, messy ice out of the building and start the process of making new ice with a temporary chiller. They were able to get the rink up and running in six days.

The new state-of-the-art system consists of a huge cooling tower and five compressors (called ice cubes) instead of two. The installation, which took careful work over many months, is located in a tight space behind the back walls of the rink. Additional new pipes extend out to Apthorp Chapel and the squash courts.

“The new system runs a lot more efficiently,” Steve says of this project, which also finished on time and on budget. “It captures the heat from the equipment, which runs through new pipes to heat the Fitzgibbons Convocation Center, the chapel, and the squash courts. It will also provide air-conditioning to all three buildings in the warmer months.”

For Steve and his team, every day is different and the to-do list is never-ending. Even when classes are not in session, sports activities continue. Events such as the Flood Marr hockey tournament are held over vacation breaks and various sports camps use Milton’s athletic spaces during breaks and in the summer. Whether the crew is dealing with a melted ice rink or snow removal so that fans can get to a game, upkeep of the facilities is a year-round endeavor.