What is the difference between credit and debit? How are interest rates calculated? And what is an ROI? For many young women, with little exposure to the fundamentals of finance, such concepts have little meaning.

Invest in Girls (IIG), an organization with origins at Milton, has been making a significant difference in changing that scenario. Through a three-tiered approach that offers financial literacy workshops, on-site visits to financial services and investment firms, and one-on-one professional mentoring opportunities, IIG is working to cultivate a generation of ﬁnancially literate and empowered girls.

“This program is having a lot of impact on girls across the country and it’s an example of something that started at Milton,” says IIG’s cofounder Dune Thorne ’94, who has served on Milton’s Board of Trustees since 2012 .

The impetus for the program, which now serves more than 2,000 girls a year, came in 2010, when Chelsea Mehra ’11 contacted Thorne about interning the following summer at the Boston-based investment firm Silver Bridge Advisors, where Thorne served as a principal. Thorne said yes.

There, Mehra spent the summer conducting research on financial literacy programs for women and sat in on workshops that Thorne had designed to show women how to build thoughtful investment plans. Helping women understand the intricacies of building wealth had been a central focus for Thorne since her days as an MBA student at Harvard Business School. Although women made up close to 50 percent of her graduate school class, Thorne observed, a significantly lower percentage were enrolled in investment management classes. She wanted to know why and decided to learn more about how women think about money and how they invest differently from men—an inquiry that led to a career empowering women to become more financially literate.

Mehra was so enthusiastic about the workshop she attended that she suggested Thorne bring her program to Milton. Together they tailored the content to an audience of young women at the School. One of their first steps was to seek support and sponsorships from respected women in the industry to hold them accountable for their goals. They were backed by 10 women who each contributed $1,000 to launch iig’s program at Milton.

The workshop was so successful that other events were added, and soon the iig program was expanded to include a deeper dive into the industry, adding on-site visits and mentoring opportunities. As Mehra left for college, the newly redesigned program, formally named Invest in Girls, was tested at two nearby independent schools: Middlesex School, in Concord, Massachusetts, and Westover School, in Middlebury, Connecticut.

Within the next several years, IIG expanded its reach to community centers and public and charter schools in states throughout the Northeast, from Virginia to Massachusetts. Today, less than 10 years after its first workshop at Milton, iig operates in 10 states, educating approximately 2,000 girls a year in 40 organizations, and acquiring corporate sponsorship from almost 20 financial services firms along the way. 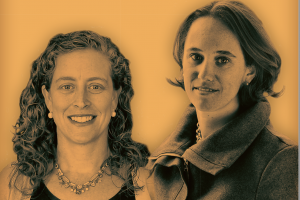 Betsy Kelder ’96, IIG’s executive director, who knew Thorne when they were on Milton’s ski team together (back then, her last name was Stein) and whose sister, Amanda Stein Carmel ‘94, was a close friend of Thorne’s, is passionate about iig’s mission. A lack of basic training and awareness around money matters, she says, can result in a lifetime of economic and personal hardship, and women are especially vulnerable.

“We have research that shows that
women stay in bad jobs and bad life situations simply because they’re not comfortable and confident enough in their money-management skills—because they haven’t known to save enough on their own to be empowered to leave,” Kelder says. “This is an opportunity for us to start really early with girls.”

“And it doesn’t matter whether you’re going to be a social worker and make $70,000 a year or a ceo and make $7 million a year,” Kelder says. “The concepts that we’re teaching are going to empower you to understand and make the best use of however much you earn, to be able to stand on your own two feet to make the decisions you want to make for yourself and not feel that money is the reason you can’t have the life you want.”

The program’s three tiers, which all offer workshops, site visits, and mentorship opportunities, feature different levels of emphasis. Tier one focuses on the foundational concepts of financial literacy— from the pitfalls of payday loans to effective budgeting to a primer on the stock market. Tier two takes a closer  look at career access, by examining the opportunities the industry offers. And tier three offers internships and one-on-one matches with female executives for those wishing to pursue a career in finance. For the time being, until the current health crisis abates, all iig programs and meetings are being held virtually.

Thorne and Kelder like to point to examples of the impact iig has made: the student who returned to tell them that because of her participation in an IIG workshop she bought a cd with money she received from her grandmother, becoming the first person in her family to use an investment tool; and the young woman, who after learning about budgeting through iig, saved enough money to buy her mother a car so that she no longer had to ride a bus two hours every day to commute to work.

And there are the young women, who, because of IIG, are exposed to career opportunities they previously couldn’t imagine. Between her sophomore and junior years at Milton, Zoe Flessas-Finocche ’19 spent a summer at Brown Advisory as a Brown Advisory fellow. Her experience at the investment management firm was so rewarding that, as she looked toward college, she planned to prepare for a career in finance.

“When we open girls up to these careers,” Kelder says, “what we’re trying to do is say, ‘There are really meaningful, fulfilling careers that you can be part of that are going to give you real access to opportunity in your life, and you should consider how these play to your strengths.’”

“The reality is these girls do it themselves,” says Thorne, who in 2012 moved to Brown Advisory, where she is the head of private client growth and strategy.  “IIG opens the door, creates the spark, but these are great young women who just sometimes need a little helping hand or a little spark to unlock their potential.”

Last year, IIG increased its capacity by partnering with the Council for Economic Education (cEe), a national nonprofit providing financial and economic literacy training to educators. With the national platform the partnership provides, says Kelder, who was instrumental in overseeing the partnership between the two nonprofits, iig will be able over the next 18 months to expand to serving 3,000 to 5,000 girls a year in 15 states. It will also be able to significantly increase volunteer opportunities for those in the industry.

That a program that has brought economic empowerment to so many young women got its start at Milton is deeply gratifying to Thorne, who now sits on IIG’s advisory board. And through Thorne and Kelder, the program continues to maintain close ties to the School. “It has really been such a wonderful journey,” Thorne says, “and we are still only in the early chapters of the organization’s growth and impact.”