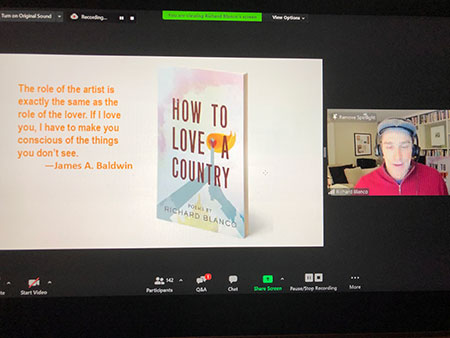 “A poem isn’t really done until it’s shared and lives in someone else,” said Bingham Visiting Writer Richard Blanco. Blanco read and discussed his poetry, which centers on ideas of home, identity, and nationality, with students in a Zoom webinar.

“What is home?” said Blanco, who immigrated to Miami as a child with his Cuban-exile parents. This idea grew bigger into What is a country? In my poems, I’m asking these questions for all of us.” When he was growing up, he said, he wasn’t sure if he was part of the American story. It wasn’t until he was asked to be the poet for President Barack Obama’s second inauguration that he felt his personal story was part of the American narrative.

In the webinar, Blanco read poems from his most recent collection, How to Love a Country. He also read from Boundaries and showed the photography by Jabon Bond Hessler that accompanies each poem. About the poem “Complaint of El Rio Grande,” Blanco said, “I wrote it with the voice of the river to speak to the absurdities of borders— they are just inventions, and I let the river speak about that.”

Selected by President Obama as the fifth inaugural poet in U.S. history, Blanco is the first Latino, immigrant, and openly gay person to serve in the role—and was, until this year, also the youngest. His other collections include Matters of the Sea/Cosas del mar, Looking for the Gulf Motel, and Directions to the Beach of the Dead.

Established in 1987 by the Bingham family, the Visiting Writer Series brings esteemed writers, historians, and journalists to campus to speak and work with students and faculty.