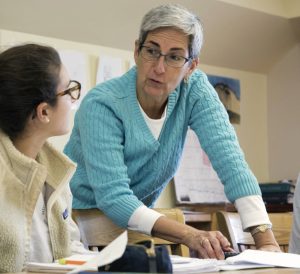 In speaking about Jackie’s tenure as academic dean, a colleague noted: “You never felt that you were dealing with an administrator with a title; you felt that you were dealing with a real person.” Indeed, this statement holds true for the many titles Jackie held: math teacher, advisor, house head, department chair, academic dean, and, most recently, dean of academic initiatives. In all that she did, Jackie carried herself with unflappable authenticity and clarity of purpose.

To uphold the highest standards for the Milton community, she tended to the needs of individuals in her care with compassion, respect, and integrity. To lead an equitable academic pro- gram, she challenged faculty to rethink grading, particularly for students in Class IV. To honor the learning needs of all students, she led the way to the first new Upper School daily schedule in decades. As another colleague described, “She believed in innovation, not for the sake of newness but for the ways that change could help our institution better serve its students.” Indeed, Jackie ensured that Mil- ton responded to calls for a more inclusive academic program.

She questioned practices that no longer felt relevant, engaged with research that challenged our assumptions, and ultimately refused to allow Milton’s past to define its future.

And for all that she expect- ed of others, she held an even higher standard for herself— one that she used to examine her own practices deliberately and with humility. Responsive, reflective, and adaptive, Jackie honored the thinking of those around her, whether with

colleagues or with students. She modeled consistency without rigidity and believed in genuine collaboration, wherein multiple voices shaped an outcome that was greater than what might otherwise have been achieved. Ultimately, she made visible her own desire to grow as a teacher and school leader along with the School itself—for a school’s growth is only as dynamic as that of its leaders.

While Jackie may have garnered the respect of the Math Department in her early years at the School, she ended her career as a mentor for all. Penn

fellows often identified Jackie as the person whom they most ad- mired or wanted to emulate. Department chairs sought out her counsel in times of need, as did countless numbers of students, parents, and colleagues through the years. And each time, Jackie’s door was open. If her classroom teaching is defined by her skillful support of students through the learning process, as described by a recent observer, then so too is the kind of teaching she did for all of us: She sought to understand each of us, each situation in which we may have found ourselves, until we, too, found ourselves learning in the care of this exceptional educator. Jackie will be retiring to Wilmington, North Carolina, with her husband, Michael, who lived with Jackie on campus for the four decades in which she served the school.