Raneem el Torky ’17
An accomplished squash player from Alexandria, Egypt, finds her footing as a scholar-athlete 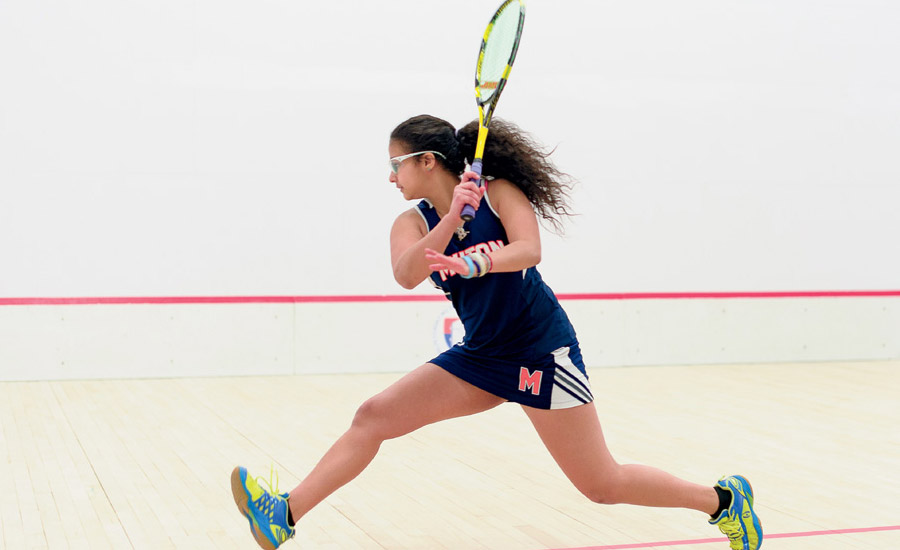 On the squash court, three-time All-American Raneem Mohamed el Torky ’17 is relentless, attacking the ball with tremendous power. Unaccustomed to losing, she plays to win every single match. Off the court, however, the aggressive demeanor switches off; Raneem is charming, friendly and outgoing. As a sophomore, Raneem was introduced to Milton by meeting other students, moving into her dorm and adjusting to American food. One of the biggest culture shocks?

“I couldn’t play squash because the courts were closed! There were so many rules that you could play only at certain times and that was hard for me. That first weekend I asked another squash player if he wanted to go play and he texted back: ‘Ha, ha, Raneem. It’s Friday night. There are fun activities here. Just go out!’”

Following in the steps of her two older sisters, Raneem had played squash at a sporting club in her hometown of Alexandria, Egypt, since she was 8 years old. In Egypt, schools are for education and clubs are for sports. Raneem spent hours in the city’s snarled traffic traveling between the two. She left school at 3 p.m. and started playing squash around 4 p.m., until courts closed at 10 p.m.: six hours of playing every day except Fridays.

That year at Milton, she adjusted to training less and balancing her academic workload. French and math came easily, but English and science classes were more difficult as she worked to improve her English-language skills. Her first big match and for her, the most memorable, was against Deerfield, a traditionally strong team that Milton had not beaten in some time. The game was at home and Milton fans crowded the benches in the Williams Squash Courts.

“At first, our team felt there was no way to beat them,” says Raneem. “Then we were winning matches, and a team win against Deerfield became dependent on my match. When I won, I was so happy. It was such a good experience for me to know that so many people from the school were there watching the team, and we won.”

“I know Raneem was already feeling at home at Milton,” says Coach Chris Kane, “but walking into the dining hall that night after that match, I think she felt celebrated in a way that was helpful to her feeling appreciated here. It was a great moment.”

Raneem’s path to Milton began when her sisters (both professional squash players) hosted a Milton squash player, Cece Cortes ’07, who spent time in Egypt improving her game. As a 13-year-old, Raneem encountered Coach Kane at the U.S. Juniors Squash Open. She was traveling with family members and they put her on a bus, alone, to go visit the Milton campus. At that time, Egypt was in upheaval; schools were shutting down for weeks at a time and daily life was disrupted. Raneem’s family slowly came around to the idea that it would be better for her to attend school at Milton.

Raneem’s junior year at Milton brought challenges—on the courts and in the classroom. She was seeded number one in the U.S. Juniors Squash Open tournament. Having placed second and third in previous years, her goal was to win. Her mother traveled from home to watch. But Raneem lost in the second round, a stunning upset for her.

“I was really sad and depressed for a while, because it had been my dream, always, to win the U.S. Open. I realized I was not training enough. I wasn’t getting enough sleep. I was struggling in biology, my hardest class. I felt like giving up on all of it.”

Raneem went home for winter break and was unsure if she wanted to come back. Family, friends and Coach Kane convinced her not to give up. “I love Milton; coming here was the best thing that happened to me. I realized I was just sad that I lost the tournament, not about the school. When I came back after break, I changed my strategy and a lot of people helped me.”

With the help from teachers and peers, and even a friend’s mother, Raneem immersed herself in tackling biology and succeeded. “I am so thankful for the people who took the time to help me and were there for me.” By senior year, Raneem was on top of her academics and captain of the squash team.

“In Egypt, we play individually, not as a team, and I was kind of crazy on the court. Not like mean or having a bad attitude, but I would get nervous and yell stuff and it was embarrassing. At Milton, playing on a team, I learned to care about the team’s reputation and upholding the school’s name. I really grew up here and became more mature. Being captain of the team taught me how to be responsible and to be a role model for the freshmen. I learned to give the advice that seniors were giving me when I was a sophomore.”

After posting two personal undefeated seasons at Milton, one of her goals senior year was to win the New Englands, but in the semifinals she lost a close match to a Deerfield player, and in the first few moments afterward, she was devastated.

“One of the things we worked on so much over her time here is how you respond to these things,” says Coach Kane. “Well, she came back two hours later, and played, arguably, the cleanest match she’s played in her Milton career and beat a player who is phenomenal. She really ended on a real high note, both in terms of her play, but more importantly, to shrug off the previous loss. She played incredibly, tactically sharp and intelligently, she didn’t give her opponent any openings, and, in so doing, she helped us finish sixth. In some ways, she hasn’t had as much practice with losing, and here she had to show the resilience that is so essential to her growth as an athlete and as a person. To me, it was quite fitting, even though it wasn’t the storybook ending with the title that she wanted.”

This fall, Raneem is excited to be attending Princeton University, playing squash and considering an engineering major. She hopes one day to return to Egypt, possibly playing a role in helping her country.