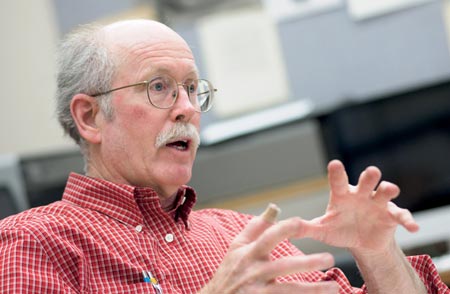 Forty-nine years of service to Milton does call out for celebration. When Bryan arrived at Milton in the fall of 1968, he came with “an embarrassment of riches,” enough talent and energy to power several full-time careers. His mind, observed one friend, “whirls everywhere, an idea a minute.” In Bryan’s open way of looking at life, everything is possible. He has never found a problem he didn’t want to solve, and he is always working on at least one. Some friends suspect Bryan never sleeps; lifelong friend Clay Hutchison ’76 claims that Bryan sleeps with his eyes open: an apt metaphor, perhaps, for Bryan’s approach.

Gordon Chase thinks Bryan’s signature collection of hats is the perfect metaphor for the roles Bryan has served. A brief sampling of the things Bryan has done during his years at Milton includes: Advising the yearbook staff forever. Winning a nationwide photo contest sponsored by J&B and serving as photographic editor for a book on Israel. Joining Kay Herzog and John Torney as the trio of creators of Milton’s pictorial history: Visions and Revisions. Creating an “installation”: a room-sized timeline for Milton’s Bicentennial, called “Milton Creates, Milton Connects.” Though wrestling was new to Bryan, he became “an integral part of the program,” according to Dick Griffin. Griff remembers a particular photo of Bryan leaping, fist in the air, after we eked out a victory against Governor Dummer (back when it was called Governor Dummer). Always total commitment.

Bryan created the photography program; inaugurated the Wood Studio course; helped formulate the concept of semester courses; developed the living floral display seniors build at graduation; and performed in a number of faculty plays, including Measure for Measure and Fiddler on the Roof.

Bryan crossbreeds lilies for fun, and his Christmas tree decorations, which require more than a little bit of tree climbing (tree-climbing and wall-climbing have played roles in Bryan’s various personae), are legendary.

Back in the early ’80s, when Milton hosted the Ralph Bradley Arts Festival, Bryan organized a famous Arts Parade, which included horses, fire trucks, and a live elephant named Ruth.

A skilled and visionary architect who has designed homes from Idaho to Florida, New Hampshire to Nantucket, Bryan has helped with every master plan project Milton undertook in the past 50 years. Bryan, for instance, suggested moving the arts department to its present location. As Milton re-sited the baseball field, and it became clear that the third-base line would run right through the Cheney garage at Voses House, Bryan picked up a chain saw and reduced the garage by half so the third-base line could proceed unimpeded, and Milton didn’t have to destroy a perfectly good garage.

Ensconced in his basement classroom (his son Colin likened it to a mad scientist’s lair), Bryan can claim to have spent more time underground than any other Milton employee. Even so, as one student wrote, “The photo classroom was a place where we all wanted to be because of Mr. Cheney. He gave us a space to laugh, to explore, and to share our evolving vision of the world.”

Bryan has resisted being categorized as a photography or arts teacher. As his wife Marilyn observed, “Forget cameras and architecture. His greatest gift has been giving kids freedom, the ability to see the possibilities in front of them.” In addition to exemplifying

“Dare to Be True” in his own life, Bryan has always dared his students to see true. A single, powerful theme threads through the many notes of appreciation that Bryan has received: “Thank you for helping me see the world—and, as a consequence, myself—in full.” A 1970 note credited Bryan with “speeding me forward down the path of becoming a more ‘together’ photographer” and others continued through the five-page letter from a recent grad that concluded, “I do not want to stop talking with someone who has shaped me into who I am today.”

Marilyn has been Bryan’s partner through all those years and adventures. After a year of coaching and teaching physical education at the Milton Academy Girls’ School, Marilyn decided that Milton was not

for her and accepted a position at La Jolla Country Day. A first date between Marilyn and Bryan happened the night after graduation in Bryan’s apartment in Robbins. Remembers Marilyn,

“The meal was very mediocre. But then he showed slides of his trip to Spain. By the third slide of ice dripping off the orange trees, I thought, ‘Yup, that’s it.’” So Marilyn turned down La Jolla and started teaching at Newton South High School (and then the Park School). By December she and Bryan were married.

Life as a faculty spouse presented its own challenges. Faculty Wife Teas were still a part of School culture in the ’70s. At her first tea, Marilyn, engrossed in conversation, sat down in the nearest available chair. Soon after, the wife of a longtime Latin teacher plopped in Marilyn’s lap: Didn’t Mrs. Cheney know that this was her chair?

In 1978, when son Colin was born, Marilyn turned her full attention to growing a family, with Ian and Claire arriving in ’80 and ’83, respectively. Eventually she resumed coaching, increasingly drawn to the younger, novice athletes. “My downfall as a coach was that I didn’t care if we won; I cared about how kids learn and how they grow.” One drizzly afternoon, Colin came home to find the whole thirds field hockey squad having a tea party in the kitchen and making brownies.

In 1986, Marilyn began directing Christian education at St. Michael’s Episcopal Church and tending to students as dorm mother in Voses House. She continued those roles for 25 years, and expanded her work at St. Mike’s to include head of healing ministry.

Next year, for the first time since 1979, someone other than Marilyn will arrange the flowers for Chapel and the two big podium arrangements for Graduation. Reflects Marilyn, “I will miss all the lovely flowers and having quiet time in our Chapel on those Sundays. I am so grateful for this satisfying work.” Marilyn has brought that same sense of serenity and happiness to so many students and adults over the years. As one former parent proclaimed, “That lady walks on water!” 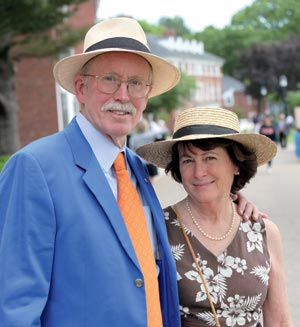 Bryan and Marilyn will move to the home in Maine they have been working on since Bryan began his time at Milton. They better have lots of beds and brownies given how many former students hope to visit. It is a moment of Bryan’s cherished “pure recognition” for us to see all that he and Marilyn have done these many years—their partnership; their modeling of rich, full, joyful lives; their uncanny instincts as teachers, as mentors, as caregivers—and know that we have been blessed. Marilyn and Bryan leave us with an indelible and inspired legacy, and we are so much the better for it.