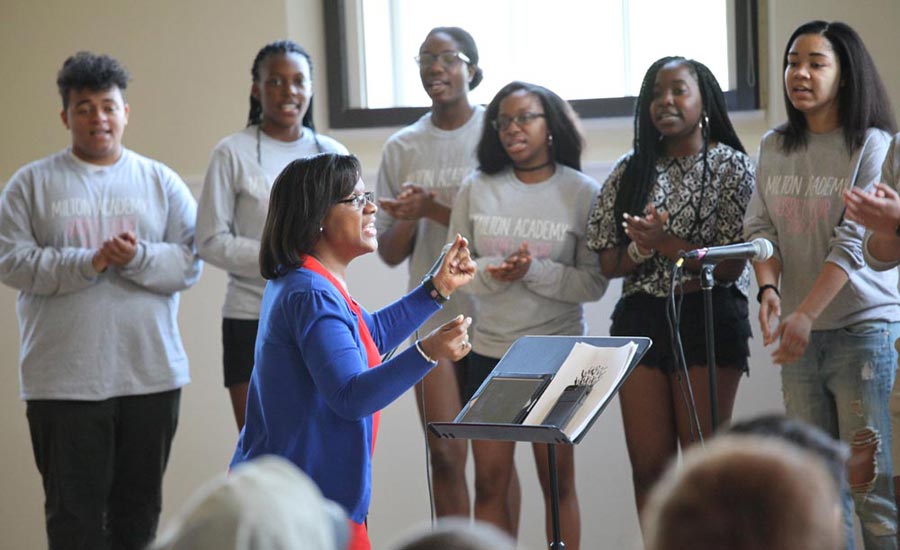 From “Ave Verum Corpus” to “The Storm is Passing Over,” from Beyoncé to Bach, singing at Milton has deep roots. Singing thrives at Milton, and the groups that gather to practice and perform are robust and varied. You’ll recognize many that are decades old, others were just launched this year. On a typical day, voices sing out at morning assemblies, in rehearsals, in classrooms, in formal performances or simply in hallways, dorm rooms and common rooms. Some songs are throwbacks to different eras and others are the latest summer jams. Nearly everyone singing is very happy about it.

“My experience at Milton was transformative for me as a musician. In my a cappella group, I was introduced to different types of music and in Gospel Choir, I sang the music I grew up listening to. Both groups helped me to learn how to be a leader in a field I’m passionate about.”
— Oladunni Oladipo ’17

A scheduled course, students study and perform great choral literature from every period, especially literature written for smaller choral groups. Membership in Glee Club and an audition are required. Every other year, Chamber Singers travel to perform in places such as Vienna, Prague and Italy.

The oldest music group at the School, Glee Club dates back well over a century and includes Class IV students and Chamber Singers. They sing a standard choral repertoire and perform at assemblies and concerts throughout the year.

Gospel Choir began as a student club in 2004. It grew out of a conversation between Lori Dow, associate director of admission, and Louise Mundinger, music faculty, about what was missing in the music department. Today, Gospel Choir performances are highly popular campus events. Ms. Dow directs the choir, along with Vaughn Brathwaite as music director. Ms. Dow welcomes all students interested in singing gospel.

“It is so great just seeing the kids of all backgrounds perform. We have kids who joined because they love performing and others who have never sung before. I’ve heard kids say rehearsal is the best part of their day. I want them to enjoy the music, but I also want them to understand the message and the meaning of the lyrics.”
— Lori Dow, Choir Director

The Octet is Milton’s oldest girls’ singing group. According to Kitty Benton ’52, the group was the “brainchild” of Lynn Erdman ’52. In keeping with tradition, today’s students audition for one of eight spots. But in a nod to current times, a beat boxer has joined the group to bring the total to nine members.

“I used to write out their arrangements, but today’s students are really good at making these arrangements on their own, so now I act as their coach. I listen to their arrangements and make sure what they intend is coming out. The easier it looks, the harder they worked!”
— Louise Mundinger, music faculty member who has led the group for 15 years 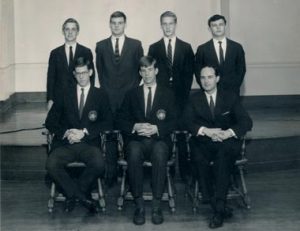 The Miltones are the oldest boys’ singing group. Ted Whalen, music faculty, has led the group for 22 years. The group ranges from eight to 12 members and their songs are typically quite current. One of Milton’s most popular night events is an annual a cappella night showcasing Milton’s a cappella singers, as well as groups from other high schools and colleges, that often include many Milton alumni. It draws a packed house in King Theatre.

“I had such a variety of singing experiences at Milton. I love the instrument of the voice because it is so organic and expressive. I sang solos and duets with my friends at Beatnik open mic nights. I was a member of Chamber Singers, Gospel Choir, annual musicals, and co-founded REZON8, the largest coed a cappella group at Milton. We started REZON8 to increase vocal performance opportunities for students so the talent of the student body could be better included and displayed. The memories of sharing my love of music and voice with so many fellow peers and faculty are ones that I’ll cherish forever.”
— Dalton Letorney ’17