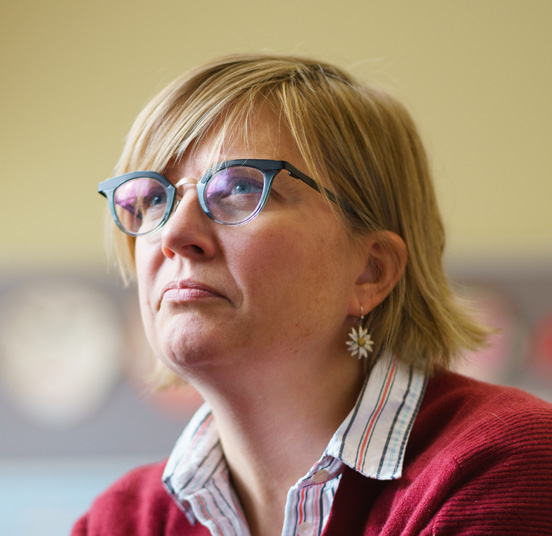 Suzanne DeBuhr, a faculty member in Milton Academy’s history department and director of spiritual and community development, shares her story of loss, discovery, and solace.

In the religion of Buddhism, the first noble truth is the truth of suffering.

In late February 2018, Chris, the husband of my friend Kate, sent me a text informing me that Kate was in the hospital with pneumonia. Oh no, I thought. Just a month before, Kate had finished chemotherapy and radiation, undertaken as a “precaution” to make sure that all the cancer the doctors had removed in surgery was gone. The scan she had after the treatment indicated that her body was clear.

A week after Chris’s text, my friend Jenny called in a panic and asked if I had seen the news on Facebook. No, I don’t do Facebook. Apparently, the doctors had misdiagnosed Kate’s pneumonia. The cancer was back, and it was aggressively attacking Kate’s lungs. Kate, my friend of 33 years, whom I met in the summer between fourth and fifth grade when we took flute lessons together, was dying. I made plans to get to Chicago as soon as possible.

The second noble truth is the truth that suffering is caused by desire.

My parents, who still live in the suburbs of Chicago in the same house in which I was raised, picked me up at the airport when I arrived on a Friday afternoon. When we pulled into the driveway, I didn’t even enter the house. I just took my mom’s car and drove to the hospital.

Kate was in her room, slumped over, sleeping in a chair. She woke up after a few minutes, recognized that I was there, but wasn’t able to hold a conversation. She was constantly moving—standing up and sitting down, pacing, or rocking back and forth in her chair. She was attached to an IV—as I understood it, a morphine drip with regular doses of anti-anxiety medicine.

We can never fully know the internal thoughts and feelings of another, so in that moment with Kate, I couldn’t know if she was feeling pain, if she was scared, or if she even knew what was happening to her body. In that moment, all I knew was that I wanted to have my old friend Kate back: the Kate with whom I could commiserate with on the state of U.S. politics; the Kate who was raising her girls to be strong, independent women; the Kate whose own openness allowed me to embrace vulnerability and accept her compassion.

The third noble truth is the truth that suffering can cease.

I returned to the hospital before dusk the following day with another high school friend, Lisa. We found Kate lying in bed, her eyes closed, her breathing labored but steady. She looked peaceful. We sat with her, holding her hands, one of us on either side of her. We reminisced about our collective friendship and caught up with one another. When Chris returned, we started to plan out the day and how we would handle visitors.

And then Kate’s breathing changed. It became more abrupt, less frequent, and shallow. The nurse walked in and told us it would be soon. We needed to say good-bye. I told Kate I loved her, that it was OK to let go, and that I would always be part of her family. Within minutes, Kate stopped breathing.

Ever since Kate’s death, rarely does a day go by when I don’t think of her in some way. Strangely, I almost feel her presence more palpably now than I did when she was alive. It’s as if the physical space she occupied kept her presence limited, and once she was no longer confined by a body, she could be present across space and time.

In early March of this past academic year, almost exactly a year since Kate’s death, when my students and I had just finished reading the Dhammapada, a foundational Buddhist text enumerating the Buddha’s teachings, I posed the following question: Is Buddhism compatible with love? After some thought, a couple of students chimed in and reasoned that Buddhism was not compatible with love, because love is defined by desire and attachment, and Buddhism teaches us to overcome desire and cultivate detachment. According to the reasoning they provided, they were right. Buddhism would be incompatible with this kind of love. At the same time, I would argue that they were also wrong. In my view, Buddhism is compatible with love—the kind of love that is expressed through compassion and kindness.

This conversation with my students got me thinking about my friend Kate and my dog, Zoey, who also died in the spring of last year. Because when I think about what helped me to endure these losses, my answer is love. In my own movement through grief and sadness, I have come to realize that love is both a feeling and a practice. Love is the practice not of holding on tight but of letting go. Love is the practice of respecting others for who they are in their fullest selves, not for whom we want them to be. Love is the practice of kindness, of holding doors and saying “thank you” and “please,” a recognition of the humanity we share with all others who live on this planet. In the practice of love, we cultivate an awareness of the interdependence of our existence with the natural world and the rest of humanity, we acknowledge the certainty and inevitability of change, and we surrender our ability to control people, nature, and circumstance.

In a way, the eightfold path could be interpreted as a path of love and compassion, in which love and compassion serve as a mindset that encompasses all the other aspects of the path and asks us to approach each experience with an attitude of love. I wonder, how would our relationships and our ideas about the world change if we approached everything—people, nature, discourse—with a loving and compassionate mindset? Would we be able to see that in loving another we actually develop love for ourselves? Would we have within our reach a world that is more forgiving, more open, and more kind? I don’t know, and I don’t know that we will ever have the opportunity to test out this hypothesis. What I do know is that the practice of love and compassion, although it did not diminish the pain of losing my friend Kate and my dog, Zoey, enabled me to be present to the reality of their suffering, to abide with them as they took their final breaths, and to carry them with me through my grief and in gratitude for the love we practiced together.