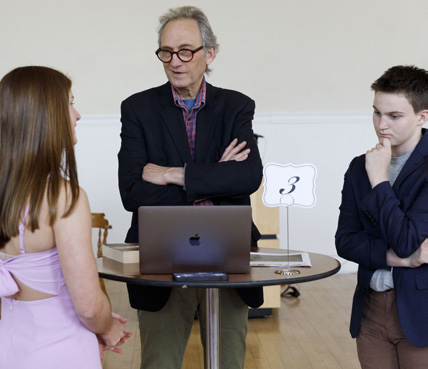 In our first conversation about this encomium, Larry mused that he hoped his classes felt like “interesting problem-solving labs.” As I began to think about how to fit all of the fun and deep-running variegations of Larry Pollans into the prescribed word limits for the speech, I realized that he had presented me with quite a tough problem to solve and that I would prove a poor student. So I apologize in advance for going a smidge over.

Larry came to us 35 years ago, thanks to friendship and serendipity. He had just left the faculty of Bridgewater State. His oldest daughter, Lily, Class of ’97, had just been admitted to Milton’s kindergarten. So when Larry and his wife, Barbara, traveled to Joe Wheelwright’s gallery opening in New York City and heard that Anne Neely, a longtime art teacher at Milton, was interviewing candidates for a teaching position in the visual arts department, Larry applied the next day.

The rest, as they say, is history. Well, actually, history, arts, art history, and much more. Initially hired to teach studio art, Larry found himself part of the history department after impressive turns guest-teaching history about Renaissance art. Soon he was teaching those courses himself and developing a first-ever art history course. With his usual modesty, Larry remembers those heady times as “five to six years of being nervous and trying to catch up,” he says. “I was pedagogically unprepared to do all the things I was expected to do. It was an interesting way for me to come of age as a teacher.” And he “loved it!”—the history and the students. Says Barbara, “Larry always felt challenged. He found the intelligence and the awareness of the kids thrilling.” What Larry first thought would be “a gig to support my sculpture habit” became the thing itself: “I kept pinching myself. ‘Am I really doing this?’”

It did not take long for Milton to do some pinching of its own: Did we really land such a multi-talented guy? In short time, Larry added history of the Middle East to his teaching portfolio. He also became a long-serving faculty advisor for the Milton Measure. In the 90s, Larry began archiving and restoring Milton’s art collection. It is hard to fully capture his seminal influence in shaping and preserving the visual culture of Milton. That magnificent eagle in Wigglesworth Hall? Larry. The beautifully restored plaster models of the Elgin marbles? Larry. He partnered with his longtime squash buddy, Mr. Millet, to give several important paintings much-needed face-lifts. He has taught numerous art history master classes to alums. Along the way, Larry also became our in-house curator, bringing in significant large-scale works by local artists to grace open spaces around campus and, most recently, revitalizing the Nesto Gallery.

The crown jewel of Larry’s work, a beloved Milton institution wholly and distinctively his, was his art history course. Jess Bond was a student in that course, and she found it “so cool” that Larry was largely self-taught. Larry’s deep research took him wherever his instincts as historian and artist led him. The result was, as Lucas Wittman ’03 put it, “the first class that was just here to show us the pure pleasure of looking and learning for its own sake.” “It was such fun to sit in that darkened room in Straus watching slides go up,” recalls Jess. “We learned to see how a painting was shaped, how the paint worked, alongside the historical perspective. Larry showed us the specifics and the wide arc.”

Central to the memorable power of the course was the March trip to New York to prowl the galleries of Chelsea and take in the splendors of MOMA, the Met, and the Whitney. A typical day could range from a classic Greek sculpture to a sculpture of dried horsehide; the aim was to see how all these seemingly disparate works could somehow connect. An exercise in cross-Pollans-ation, as it were.

This spring marked the 33rd iteration of the trip. In earlier years, budgets were tight and risk management did not occupy the forefront of everyone’s thinking. The class took the Fung Wah bus. Larry was the sole chaperone, sometimes for 35 students. The students had to find their own lodging. Eventually, the present era dawned, lawyers began to feel cardiac tremors, and, in Larry’s own words, “They whipped me into modern shape.”

Larry stays in close touch with former students. What emerges from them is enormous gratitude. One wrote, “The course changed my life forever; it launched my passion in art.” Another observed, “I remember how he encouraged us to look at the same piece of art from radically different angles. That process of accommodating different ways of seeing has translated to many aspects of my life.” At a core level, Larry’s students feel, as one put it, “seen and understood, like Mr. Pollans got me.” Yvonne Fu ’14, a Measure editor, appreciated Larry’s cultural sensitivity and awareness, particularly his fondness for that ancient Chinese call to civil disobedience and irreverence: “The sky is high and the emperor’s away.” When Lily and Margot Pollans run into Milton alums, they often hear, “You’re Mr. Pollans’s daughter? I LOVED him.”

Now about that sculpture habit. Somehow, even with all he had going at Milton, Larry sustained a second life as a practicing artist. He co-founded the Boston Sculpture Gallery. The gallery expected each member to mount a show every two years, and for a long time, Larry sustained that. But it was not an easy life to balance; there were sacrifices. Finally, he had to scale back. Happily, Larry’s recent part-time role at Milton allowed him more time for his art, and his show at the gallery this fall was “my best work,” he says. “It took me 30 years but I finally got it.” Larry also teamed with Joe Wheelwright to create a foundry on the Wheelwrights’ land in Vermont. That project entailed cutting an enormous kiln in half, trucking it to Vermont, and then reassembling it. Hard, time-consuming work. Susan Wheelwright remembers that Larry always found time to step out and call Barb.

The idea of Larry moving on from Milton leaves us with a heavy spirit. But as he heads off to a wonderful life of more time with Barbara, more time in New York City to visit kids and grandkids, more time in the studio, more time with his dog, Pip, we know that, astute teacher that he is, he has prepared us. Susan Wheelwright admires the way Larry “lets us feel like contributing experts—quiet and deep and humble,” he leads us out of ourselves to ourselves. Barbara, too, speaks of this knowing approach: “With Larry, you learn how to see things and place them historically, so you then have this basis for reacting to new ideas on your own. You know where to put them in your own thinking.” Says Ann Foster, “Larry’s never heavy-handed. We always laugh together, but I also always leave thinking about something bigger, deeper. Larry knows what’s important and he isn’t distracted by day-to-day kerfuffles.” Kerfuffle: a delightful Larry kind of word, just the right place to end.

At the end of that first conversation, Larry remarked, “I wanted to be a useful and productive person and have fun doing it.” Mission more than accomplished.

Other things to know about Larry:

• He and Bob Sinicrope grew up in the same town—Meriden, Connecticut—and both served in the Peace Corps.

• Larry is one cool cat. He has been described variously as having “a loping Giacometti gait,” “physical elegance,” “a youthful mind,” “a blue-black laugh.” Fifteen years ago, a student wrote that Larry “walked with a swing beat,” a now legendary observation in the Pollans household.

• Many people praise Larry’s loyalty. When the Wheelwrights moved to Dorchester, Larry came right over, pulling Lily on a sled, to make sure they were all right. After Joe died, Barb and Larry had dinner with Susan every Wednesday. Many cite all that Larry did for Bill Moore, first as support and caretaker and finally as executor. Larry never wavered in those responsibilities.

• Larry is a very good cook, always trying new things. At a new restaurant, he’ll order the most exotic item on the menu, sometimes to his regret. Larry never regrets oysters. On Thursdays you can often find him at the Ashmont Grill taking full advantage of Buck-a-Shuck Night.

• He is, as the history department can tell you, a coffee fiend. Larry helped create the Coffee Club. It has clear standards: Everyone joins; a full pot must be ready before school and before recess. And not just any coffee: Flat Black or else.

• Larry reads the New York Times religiously. Fellow history teacher Josh Emmott shifted his reading of the NYT to early morning to prepare for the daily visit of a fully informed Larry itching to dig into the latest news. Josh calls Larry “the intellectual center of departmental conversations,” and says, “He’s the last of a generation pushing us to see things in the larger context. I admire him for eloquently expressing views you could disagree with but need to contemplate—serious ideas. You have to take them with a certain amount of gravitas.”