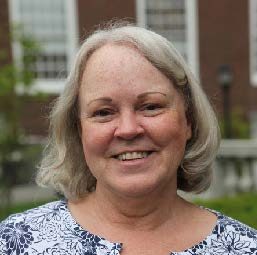 The framed poster in her office that boldly states, “Keep calm and carry on” heralds Pam Rodman’s mantra. As registrar since 2003, Pam has guided this ship that is the Milton Academy Upper School in seas both stormy and calm, standing boldly at the helm through three academic dean transitions, four principals, and five deans’ office assistants.

Whether she was maintaining accurate records for grades and comments, responding to students’ and parents’ questions about courses and schedules, or ensuring that Upper School teachers were meeting appointed deadlines, Pam’s meticulousness and her ability to hold myriad details in her head at once are legendary. Her files, folders, lists, and calendars, always color-coded, allowed her to quickly access any information needed, and she helped countless students who wanted course changes and alumni in need of transcripts. Indeed, it seemed that everyone who entered her office needed something from Pam, and sometimes they asked for the impossible. Her response, in fun, might have been, “And I want a pony.” One day she got one, albeit of the plastic variety, from a department chair who appreciated her humor.

Pam began her Milton Academy career in Cox Library; at the time, her children Lindsey ’01 and Colby ’03 were already well-entrenched in School life. Pam enjoyed her close work with students in the library, and she leaped at the opportunity to become the registrar. Unconstrained by convention, Pam soon proved herself in that role as a creative thinker who was open to change. She led the office into the 21st century; when she began as registrar, the School still produced transcripts one by one, on an IBM Selectric typewriter. That practice, and others, quickly changed, and now she (gasp!) uses technology to do just about everything her job requires.

Although it is time to say good-bye to Pam, we know her connection to Milton will endure. We are tremendously grateful for her many years of service and for the integrity with which she performed each and every task in the registrar’s office. We hope she and Will might return for a future reunion with Lindsey or Colby, but for now, Pam’s heart lies in Dallas with her new grandson. Despite the miracles of Facetime, pictures on a screen cannot take the place of sharing in person those moments of wonder as a child takes his first steps or says his first words. We wish Pam and Will all the best as they resettle in a new state to enjoy the pleasures of family, gardening, and watching a New England blizzard from afar. We will miss you, Pam.