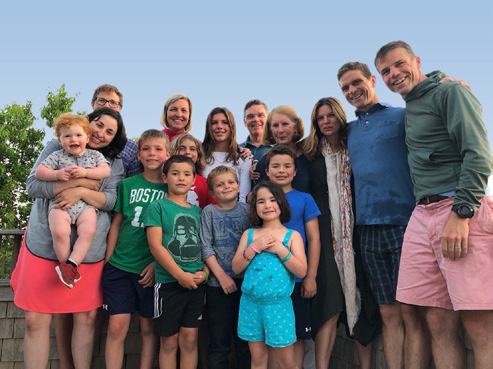 For decades, many knew Cathy Everett as “the voice of Milton Academy,” the one who, in this elevated, disembodied state, pronounced and proclaimed. Neither then nor now would Cathy tolerate such puffery. She wrote and spoke crisply, cleanly, and simply on the hardest days and on the easiest. Ever resolute, she never wavered in the execution of this responsibility, the most elemental sort of service. No, far more than an institutional voice, Cathy embodied the strength of Milton Academy, her firmness born of conviction and commitment. A trusted advisor to five Milton heads of school (I’m pretty sure that Cathy has a lot of stories that she could tell) and an unofficial advisor to many of us, Cathy provided direct, unvarnished counsel to all who sought her wisdom. Consider your audience, she might advise. Excise the adverbs, she always insisted. Never, ever use an exclamation point like that again, she almost gasped. She was right on all counts.

For years the leader of Milton’s communication office, Cathy shaped the way in which the world now understands Milton Academy. That task sounds simple. It’s not. Milton’s multiple constituencies often presented competing, even contradictory, needs. As good Miltonians, those constituents never missed an opportunity to inform Cathy of our errors, their generosity knowing few bounds. Still, respectful of all perspectives—of our youngest kindergartners and of our most anxious boarding parents—Cathy had an abiding concern for those who entrusted their children to our boarding program, what she considered to be a defining element of our institution. Cathy made messages clear for all, no matter their outlook. Varied needs, perceived and real, were just one source of challenge. Rapid technological growth also demanded constant innovation and evolution. Unflappable, Cathy provided deft management of that ever-changing communications landscape.

For all that changed during Cathy’s tenure, one fixture remained, a thoughtful, evocative treasure: Milton Magazine. Convinced that strong alumni connections fed the School’s soul, Cathy engaged graduates with probing questions, encouraging them to share their work, their lives, their goals. And then the hours of editing began. Every word, every phrase, every photo mattered. From compelling cover to compelling cover, from insightful feature to insightful feature, the magazine captured and magnified Milton, the School that Cathy so deeply loves.

Perhaps that’s what Cathy has done best: she has distilled this lively, sometimes raucous place to its essence. Cathy conveyed the joyful humanity of children in a single image; she liberated our defining principles from the bonds of tepid prose. At every moment, Cathy seemed to call us back from loose thought and loose language. Be strong, she seemed to say. Be true. Be Milton.

And Cathy, as you look forward to the time you will now have to spend with Jim, your three sons, all Milton graduates, and your eight grandchildren, we say this: Stay strong, stay true, and forevermore, stay Milton.