DJ Nash ’90 , A Million Little Things Takes on the Big Things in Life 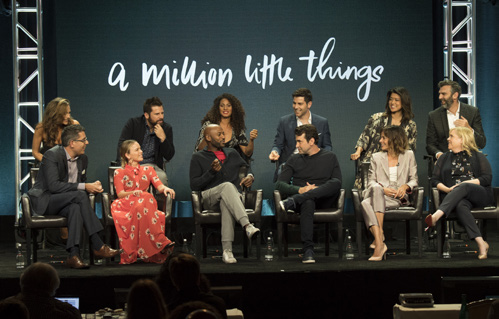 DJ Nash ’90 was working on the worst gig of his life when he got the push he needed to create the ABC drama A Million Little Things.

“There was a story inside me that had to come out,” DJ says of that period. During his lunch breaks, he would go for walks to clear his head and try to psych himself up for the long afternoons of work, and one day he ran into an old friend. They made plans to have lunch the next week.

The friend died by suicide before they saw each other again.

“I don’t think for a second that our lunch could have saved him, but I think almost every day that we could have had one more conversation,” DJ says. “His death was a wake-up call to me, to say to myself, ‘What are you doing? Are you happy with the choices you’re making? How are you going to live?’”

A Million Little Things follows the lives of seven close friends grappling with those questions in the aftermath of the suicide of Jon Dixon (played by Ron Livingston) in the first episode. Jon, whose idealism and zest for life sparked the origin of the group, appears happy and successful, and his death unravels truths the rest of the friends must face.

The Boston-based show, which premiered in the fall of 2018, quickly earned a devoted following—“Millionaires,” they’ve named themselves—and ABC responded by moving it into a coveted Thursday-night slot. The network also jumped at the chance to renew A Million Little Things for a second season, calling in February for 22 episodes starting in the fall of 2019—something of a rarity in an industry quick to cancel new shows after only a few episodes.

The themes in the show resonate with fans who have survived suicide attempts, are mourning loved ones lost to suicide, or are living with depression or cancer, DJ says. Fans have reached out to him and the show’s actors to share their deeply personal stories, something he finds validating and encouraging. Filming on the pilot happened right around the time of the suicide deaths of designer Kate Spade and chef Anthony Bourdain, which brought an unfortunate relevance to the early episodes, in which Jon dies and Rome (Romany Malco) attempts suicide before receiving treatment for depression. Meanwhile, Gary (James Roday) and Maggie (Allison Miller) meet in a breast cancer support group: His cancer is in remission, while hers is back, with a devastating prognosis. Rome’s wife, Regina (Christina Moses), struggles to acknowledge her childhood sexual abuse.

“Some people think this is a show about someone dying, but it’s about these friends and the changes they make because of this death,” DJ says. “They’re all stuck; they’re not living the lives they thought they’d be living.”

If the convergence of these dramatic plotlines sounds over the top, consider this: Suicide in the United States is on the rise, making it one of the top 10 causes of death for people of all age groups. Depression diagnoses are increasing, too—perhaps as people feel less stigmatized talking about their mental health.

“When we were making the pilot, if someone on the crew came up to me with a folder or a binder, I knew they were asking about a location or a prop,” DJ recalls. “By the third day, I realized that if they came up empty-handed, they were going to share a story. What’s surprised me most about making the show is that, while I set out to tell my story, we ended up telling a lot of people’s stories.”

The cast members take the feedback they receive from viewers to heart, DJ says. “People are so generous and trusting to share their experiences, and we want to make sure we honor that. I was talking to James Roday, and he said ‘If the show was canceled right now, fine. We did what we were supposed to do.’ And I think that’s exactly right.”

Even as the show was on hiatus for the summer, fans shared their stories with DJ and the cast. Viewers applauded the portrayal of high-functioning, successful characters grappling with mental and physical illness.

Erin O’Malley, a Boston radio host, tweeted at DJ, “I fought breast cancer in Boston, along with Maggie, and you were SO spot on with the battle. Thank you for being so realistic with your characters.”

Another tweeted: “I love that you bring to light so many variations of real life conditions that still have unwarranted stigmas attached to them . . . . You give them
a safe place with dignity.”

And another: “AMLT kept me sane while I was going through chemo and radiation for breast cancer last year. Thank you for creating this show!!!”

In May, A Million Little Things received a Television Academy Honors award, which recognized “seven outstanding programs that have leveraged the dynamic power of television to inspire social change.” 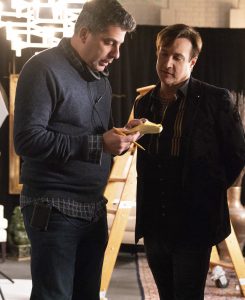 “I don’t usually care about awards, but this is really an honor,” DJ says. “If we were going to get any award, this is exactly the type of award I’d want, which is about the content of the show. It used to be that if someone died by suicide or suffered from depression, there was a shame and a stigma to it, and a tendency to want to find a specific reason for it—a breakup or a job loss or financial problems. I’m proud of the way we’ve shown these issues. We have a consultant on the show who is amazing. She is so committed to making sure we get it right.”

Milton alumni will recognize a few nods to DJ’s time on campus. In one flashback scene, Eddie (David Giuntoli) touches the pregnant belly of his wife, Katherine (Grace Park), and greets the baby as “Milton.” (Katherine isn’t sold; they end up naming the baby Theo.) A bar in the show is called Blind Dog Whiskey, the name of a campus band when DJ attended Milton.

And then there’s the elevator scene. In a pivotal flashback, Jon, Eddie, Rome, and Gary meet one another while stuck on an elevator. Their bond begins to form as they pass time before being rescued, and Jon asks Eddie, the musician of the crew, about the one person he’d most love to have dinner with.

“My high school teacher Mr. Sinicrope,” Eddie replies. “I just want him to know how much he means to me.”

DJ played jazz at Milton under the direction of longtime music faculty member Bob Sinicrope, who emailed him after the first episodes aired to say congratulations. Bob is “all over the show,” says DJ, who carefully considers the meter of a scene as Bob did while students learned songs. The show films in Vancouver, and DJ was in Los Angeles when that episode filmed. He placed several crew members in charge of making sure “Sinicrope” was pronounced correctly.

“The actors know I sometimes ride them a little hard to stick to the words because the scripts have rhythm,” he says. “Sometimes I’ll reassess the tempo of a scene, and I’m always thinking about jazz with Mr. Sinicrope.”

The show is DJ’s first to make it past its first season. Prior to A Million Little Things, he created Growing Up Fisher, a semi-autobiographical story about growing up with a blind father, starring Oscar-winner J.K. Simmons and Jenna Elfman. His show Losing It was a half-hour dramedy about living with dementia, loosely based on his father’s life. Truth Be Told, a comedy based on his friend group, lasted for a season.

DJ’s road to television writing started with stand-up comedy. His first appearance on stage as a comedian happened at Milton, opening for Blind Dog Whiskey. He estimates he has performed at more than 400 colleges and universities. In 2000, he was invited to Montreal’s Just for Laughs comedy festival to perform in its New Faces showcase. There, DJ was offered a television development deal; he created and starred in a pilot for CBS, Life With David J, based on his life as a comedian. Elliott Gould played his father. The pilot didn’t pan out, but it set DJ on a new course.

“I realized I did not like acting, which was heartbreaking,” he says. “I thought, ‘I came out to L.A. to be an actor. What now?’ But I really loved writing the pilot, so I started writing.”