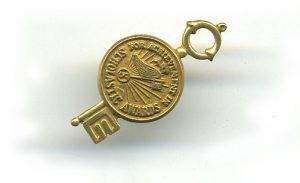 In writing, Anne Kwok ’21 received numerous awards in poetry and fiction including three Gold Keys, one Silver Key, and one Honorable Mention. For her poem “Aubade For My Sister,” she also received an American Voices and Visions Medal, the highest regional Scholastic honor.

“It is one of the more abstract poems I’ve written,” says Kwok, who was taking the creative writing course and the poetry half course. “I’m experimenting with new forms of writing and exploring different poetry forms.”

Last fall, her work was also recognized by the Foyles Young Poets competition, when she was awarded Commended Poet. Kwok says she has always loved writing, but at Milton she has more opportunities to write poetry. She has also enjoyed having visiting poets on campus,including Gregory Pardlo, who spent time in her class: “I’d been struggling a lot with appropriating someone else’s voice, and he told me it’s about finding the individual story and to focus on that.”

Erica Yip ’20, who earned a Gold Key and a Silver Key in poetry, was also a finalist in the 2020 Young Arts National Competition for a play script adapted from a piece of her fiction.

In the Scholastic Art Awards, Grace Li ’20 earned a Gold Key for her photograph “space and movement,” a Silver Key for “blue bedroom,” and four Honorable Mentions.

“One of the reasons I am drawn to photography is the ability to warp a viewer’s perception of reality through a medium that historically has been trusted to accurately capture it,” Li says. “With Polaroid film specifically, I enjoy experimenting with different ways to manipulate the film and chemicals used to develop the image. By changing the temperature or interfering with the development of the film, I can create new realities.”