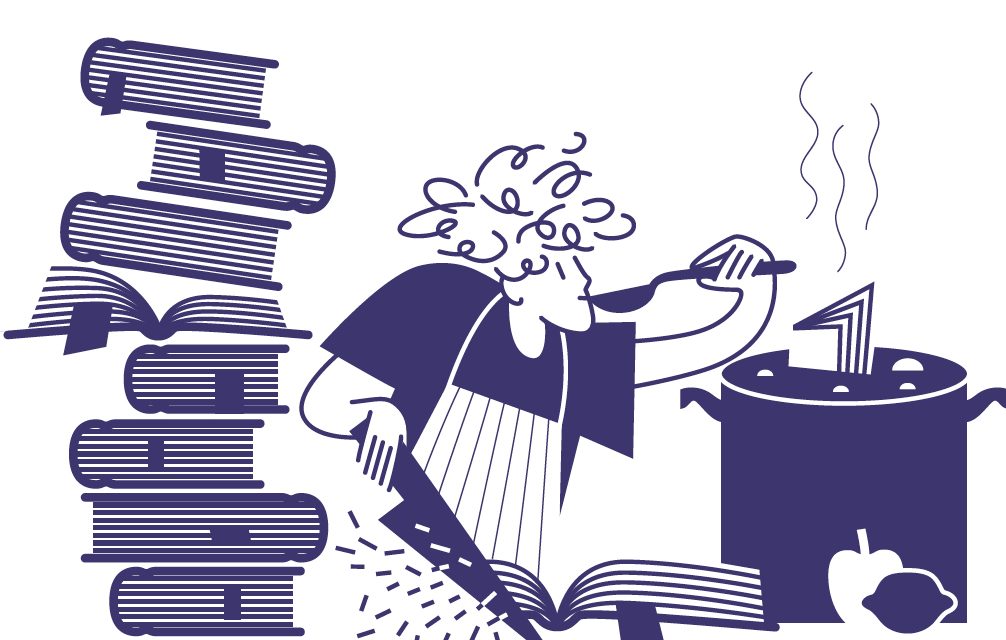 Sometimes, when I see the limitless online choices for food-oriented programming, I think wistfully about all the pleasure I derive from reading cookbook authors who are also great writers, and all that I would have missed over the years if cooking videos had supplanted their books.

My stepmother taught me how to cook the good food we ate at home, often by pointing me to a recipe in a cookbook. I am largely self-taught when it comes to most of the cooking I did after I left home and all of the vegetarian cooking I did afterI embraced my passion for it and decided to turn that into a career. I lived in Austin, Texas, then, and started teaching vegetarian cooking classes and cooking once a week for 35 paying guests at my at-home “supper club.” Eventually I had a vegetarian catering service. It was inevitable that I would write a cookbook. Selling the book to a publisher took another two years (vegetarian cooking was far from mainstream in the 1970s), and the book came out two years after that, during which time I learned a lot about food writing, both from my extraordinary editor, Frances McCullough, and from reading other food writers.

When I met Fran, she gave me a couple of cookbooks she thought I’d like. One was Paula Wolfert’s iconic Couscous and Other Good Food from Morocco; the other was Mireille Johnston’s evocative Cuisine of the Sun: Classical French Cooking from Nice and Provence. Both books had a profound impact. The recipes were deeply researched, authentic dish- es that the authors had learned to make at the source. Reading them

gave you a sense of what the dishes would taste like and put ideas into your head about going to the source yourself to experience those flavors firsthand.

I had only just discovered food writing when Fran gave me those books. Over the previous year, when I wasn’t cooking or teaching or catering or throwing parties, I’d been putting a lot of time into reading cookbooks, not just for recipes, as I’d always done, but for the prose. I sat at my big oak dining table and pored through Julia Child, and all of Elizabeth David’s books, and James Beard. I read Waverly Root’s writings about the food of France, Italy, and America, and savored The Alice B. Toklas Cookbook. I discovered Calvin Trillin’s funny food pieces in The New Yorker and read them all. The biggest revelation was food as memoir. This happened big time when I discovered MFK Fisher.

Two iconoclasts, John and Karen Hess, published The Taste of America in 1975. “We write with trepidation,” their intro titled“The Rape of the Palate,” began. “How shall we tell our fellow Americans that our palates have been ravaged, that our food is awful, and that our most respected authorities on cookery are poseurs? Can most Americans be wrong? Considering our recent political and social history, the answer is evidently yes. But that is the wisdom of hindsight, imposed upon us by Vietnam and Watergate….” Food writing, I discovered, could also be political.

Before I had my first computer, I had the Time Life Good Cook Series. Richard Olney, the “chief series consultant,” was the talent behind this groundbreaking series of 28 illustrated one-subject cook- books. But the Olney cookbook that I still read in bed is Simple French Food. I learned much about French country cooking, and specifically the cooking of Provence, from Olney’s book. I also learned a lot about Olney, who was opinionated and very thoughtful, often passionate, always eloquent.

The books that helped my cooking the most in the early 1970s were not vegetarian, even though I was. But there was one exception: Anna Thomas’s The Vegetarian Epicure. Thomas’s cooking was European at heart, though she lived in California. There was nothing hair-shirt about it; she clearly had fun, which is whatI was all about too. Later, I would savor the work of Deborah Madison, one of the great cooks of all times, who is also a wonderful writer.

Many of my favorite cookbooks are written by lesser-known cooks such as the English author Patience Gray. To miss out on Gray’s Honey From a Weed is to suffer a loss. It is one of the most poetic cookbooks in my library. The late Judy Rogers’s The Zuni Café Cookbook is thick with prose but not weighty. You begin to thumb through looking for a recipe for your upcoming dinner party, but you end up reading. Like the salt she uses to season her meats at just the right time, Rogers’s prose is purposeful. It tells a story.

Sometimes it’s just a memorable phrase, a laugh, a one-liner, that I’m grateful for. I am forever quoting this line from Russ Parsons’s How to Pick a Peach: “Let’s get one thing straight: most eggplants are not bitter (even though they have every right to be after everything that has been said about them).” Amuse me in the course of explaining why it’s not necessary to salt eggplant and I’ll be your book buddy forever.

MARTHA ROSE SHULMAN ’68 IS A COOKBOOK AUTHOR AND A FOOD COLUMNIST FOR THE NEW YORK TIMES.