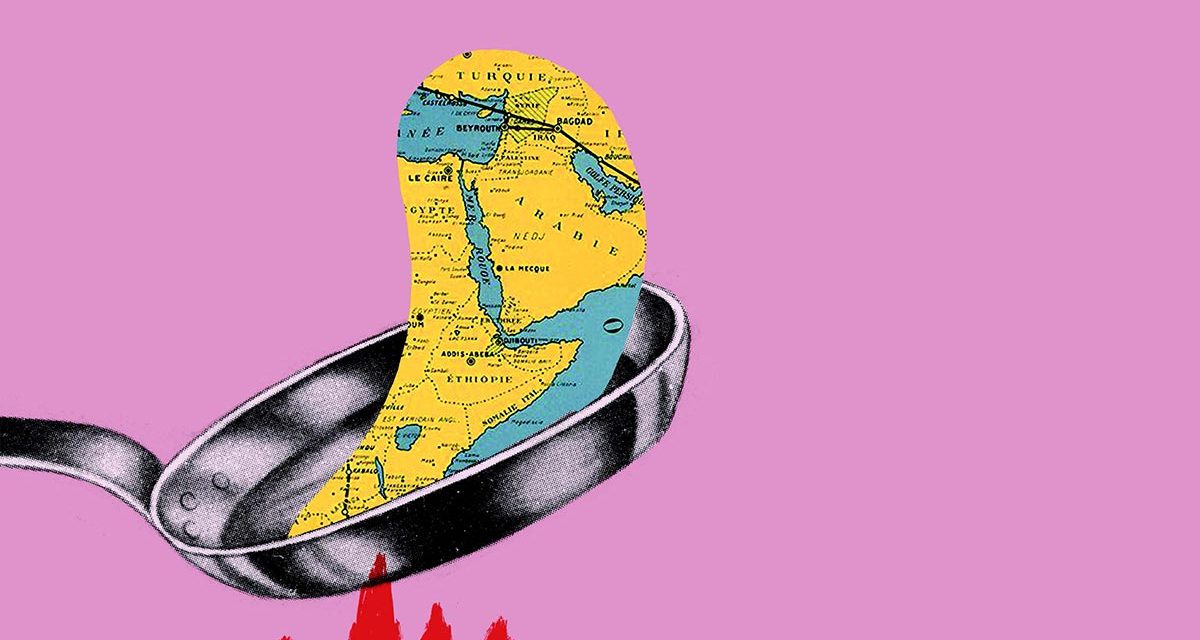 Starting as a new teacher at Milton Academy during a very unusual academic year, I did not know how things would go. It was only my third year of teaching at a high school level, and I was still learning how to navigate this world. When my faculty mentor, Jessica Bond, asked me to share some information about myself that she could use to introduce me at the first faculty meeting, I wasn’t sure what to say. The only thing I could think of was my love for food and cooking inter- national cuisines. This soon became the topic that other faculty members used to start conversations with me whenever we met on campus or in a Zoom breakout room.

Not long after, Kelly Reiser, the director of student activities, reached out to me and asked if I would be interested in hosting virtual Thursday night cooking sessions with Milton students. I appreciated the opportunity because I was already trying to think of ways to connect with the students and interact with them outside the classroom. I also thought it could offer the students some sense of community and normalcy during this particularly odd year. Cooking has long been a passion of mine, so I was enthusiastic to share that with the students. It is also an important part of my culture and identity—and a delicious way to represent it!

Moving to Italy from Palestine to attend high school at the United World College of the Adriatic at the age of 17, and being a practicing Muslim, brought some challenges. Food was one of them. It turns out that Italians love to cook with pork and wine! While my school made an effort to have appropriate meals available for those with food restrictions like me, our options became quite repetitive.With the help of my mother (and Skype), I started teach- ing myself to cook all the dishes I was missing. Ever since—for the en- tire 15 years I have lived abroad—making the food of my homeland has been a source of enjoyment and comfort. It has helped me feel connected to my heritage. It was also a great way to share my culture with friends at my high school and later on in college at Clark University. 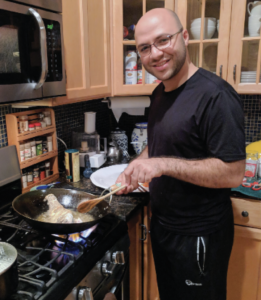 Preparing the dishes of his Palestinian homeland is a source of great enjoyment and comfort for Mahmoud Abdalrahman.

When eating at Arabic restaurants in the United States, I noticed that they generally feature meat-heavy dishes (kabab, shawarma, etc.). Many people are familiar with Levantine side dishes such as hummus, falafel, and tabouli, but many of our main dishes are vegan or plant-based. I believe this is partly because meat is a luxury that the majority can’t afford on a regular basis, and also farming is a historically common profession in that region. My Palestinian refugee grandparents were settled in Gaza, coming from farming villages where they ate what they planted. Such dishes focus heavily on fresh, high-quality, seasonal local produce. This inspired me to share less-known vegetable-heavy dishes such as stews based on spinach, chickpeas, black-eyed beans, okra, and green beans.

If the vegetable is not the focus of the dish, it becomes the spice or the herb used. In general, Levantine cuisines deviate from other more famous Mediterranean cuisines in our use of spices, which is influenced by ancient Indian trade routes. However, unlike many South Asian cuisines, ours tends to focus on only one or a couple of spices or herbs per dish, emphasizing those specific flavors. Whenever I’m asked to give an example, I recall dill seeds. I seldom see a recipe from other cuisines that uses them, even though dill seeds can add a beautiful and unique aroma to carbs such as breads, rice, cous-cous, and especially when coupled with onion and olive oil.

To kick off Thursday cooking nights, I decided to start with simpler and well-known recipes the students are already familiar with before exploring more-foreign ones. We made shakshuka, hummus, shawarma (chicken or tofu), and split-lentil soup. I selected these dishes for their overall simplicity and wholesome flavors and for hav- ing easy vegetarian/vegan substitutions. The sessions always had a great turnout, and the students were enthusiastic about them. I greatly enjoyed watching them cook and hearing about their experiences sharing the fruits of their labor with their families. Those students who were not able to cook along took careful notes, made the dishes later on, and shared photos of them with me. I was pleased when some parents reached out to me and expressed their appreciation and enjoyment of the dishes their children cooked.

While it felt odd at first to cook while giving instructions as we see on TV, it did not seem all that different from performing a chemistry experiment with my students in the lab. In fact, I found myself giving the students some chemical rationales for some of the steps we performed (such as, order of addition, choosing heat level, mixing certain spices, marinating, and particular ways of cutting). It turned out that the food science course I took online at the beginning of the pandemic wasn’t a waste of time after all.

I am looking forward to hosting more cooking nights this coming year. Several times already the students have specifically requested a session on flat bread, and I am planning to share more Palestinian farmer dishes, such as soups and vegetable stews. I also hope to offer dessert sessions, featuring popular treats such as knafeh (a syrup-soaked- layered sweet with cheese or other fillings, see Recipes), ka’ak (date-stuffed butter cookies), and namoura (a semolina and cinnamon cake). Cooking and eating, for my family at least, has always been an event that brought us together. Being a part of this kind community at Milton Academy makes me want to share this passion. I hope future cooking nights can be done in person so that the students can help and we can enjoy the meal together.

MAHMOUD ABDALRAHMAN IS A MEMBER OF THE MILTON SCIENCE DEPARTMENT.