LESSONS IN GRATITUDE AND SERVICE 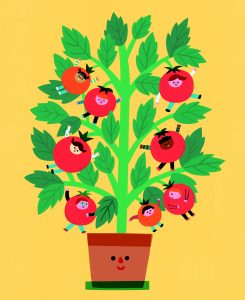 These three words became some- thing of a mantra for the Lower School kindergarten this past spring, as teachers overheard one student remind another about the importance of gratitude at lunchtime. It was a sign that the message of a di- vision-wide effort involving food and community engagement was taking hold.

“It’s a way to make them aware that while we’re a community with- in kindergarten, there’s the community of Milton Academy, and there’s a much larger community outside of that,” says kindergarten teacher Vanessa Phifer. “We want them to always be aware of the people who surround us and that we’re fortunate to have what we have.”

On a mission of gratitude and service, students in the Lower School’s grades K–5 jumped into Tomato Tuesdays—a project to grow tomatoes and other produce to be donated to the Milton Community Food Pantry—with enthusiasm. Throughout the spring, classes planted and grew tomatoes, worked in the Lower School’s garden, read books about food insecurity and community gardening, and completed projects on the theme.

Tomato Tuesdays arose from a number of sources, says Monica Furtado, who guided the division’s community engagement programs during the school year. In second grade, teachers Maria Elisa Ciampa and Sandy Butler had been teach- ing about food insecurity through- out the fall, and Jane McGuinness, a fifth-grade teacher who also leads the School’s sustainability and gardening efforts, had the garden ready for planting. In all, the students and teachers grew more than 500 tomato plants in the spring, and McGuinness planned to continue working in the garden to donate more produce throughout the summer.

“It was a great way to get the community together in a way that we could all be outside,” says Furtado.“Each student could participate and know they’ve given back.”

Every Tuesday, Furtado sent out a newsletter giving guidance on grow- ing the plants and sharing resources about food and food insecurity. At each grade level, students read the book Farmer Will Allen and the Growing Table, by Jacqueline Briggs Martin, the true story of a former basketball player who turned vacant lots in Milwaukee into farms where volunteers could grow fresh food for underserved people in the city.Allen became an inspiration for urban agriculture efforts nationally.

“We want the students to understand that small acts of kind- ness can change the world,” Ciampa says.“The kids were responsible for their plants, and they took to that extremely well. They were totally invested.”

During the run of the project, teachers built lessons about food into different elements of the curriculum, including math, science, language arts, and social studies. As they prepared to donate the plants, they decorated reusable market totes for the recipients. Students learned about food deserts—areas without easy access to fresh food—and were surprised to hear that there are some nearby in Massachusetts.

In kindergarten, sensitive topics like food insecurity and inequality were approached through stories that helped students understand the issues, says teacher Kiana Gibson. “We talk a lot about commonalities and differences,” she says. “We talk about how kids in other parts of the world have different ways of getting their food, and how food and water are not as accessible everywhere as they are for us. At this age, they want to help out, and the project has shown them that they can make an impact, even though they’re little. This is a nice way to start their learning about giving to others.”