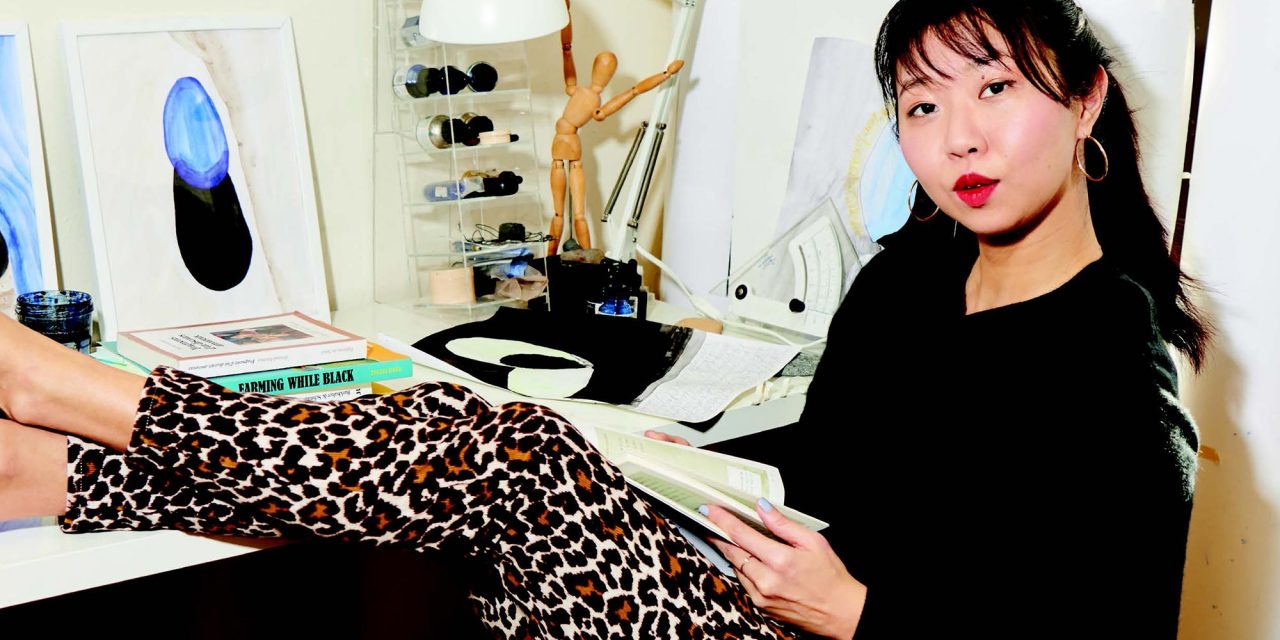 In October, when BEAU BREE RHEE ’03 arrived at Ma’s House, an art space and residency for BIPOC artists on the Shinnecock Indian Nation Reservation, she went to a point where the land meets the sea. She gathered soil from this never-surrendered land, which is surrounded by the uber-manicured Hamptons on Long Island, New York. A visual artist and choreographer, Rhee has always been fascinated by intersections— by the rich moments when things cross over, be they in the natural world, in her work, or in her teaching at New York’s Parsons School of Design.

Rhee transformed the soil into a pigment, the starting point for the Menwees, a new series of abstract works on paper that is the “conceptual core” of her work at the residency. (Menwee means navel in the native language and could also be read as mes nuits). Although she doesn’t work exclusively on paper, Rhee says she likes the delicacy and immediacy of it. “In that way, it relates to dance. I think of drawing as performative, too. If I’m not warmed up, if I’m not in a clarified place of a mind-body connection, it just doesn’t work out.”

The process of creating pigment is a bit “like baking a brownie,” continues Rhee, who pulverized the soil with a mortar and pestle, mixed it with vinegar and gum arabic, and heated it in the oven. Later, she created a pigment from wampum shell dust. Her aim: to take something as ordinary as soil and transform it into something extraordinary.

Rhee describes her body of work as an “ecosystem” of dance, drawing, and ecology, with each medium crossing over with the others. A first-generation Korean-American, she grew up primarily in the Boston area, with seminal time in her childhood spent in South Korea and France. She was raised among these three cultures, completing her MFA in Geneva at the Haute école d’art et de design.

“The three languages kind of swim around in my head, completing each other like a fluid Rubik’s Cube, each from a different aspect of my life,” she says. That fact, in addition to her experience of synesthesia, could be seen as the ideal circumstance for fostering a more porous perspective on language and the visual world. (Synesthetes experience one sense through another— for example, seeing a word as a color or hearing a sound and seeing a particular shape or pattern.)

Rhee studied ballet and classical piano (“very seriously, like a lot of good Korean girls”) as a child, but an injury suffered as a teenager moved her away from ballet. “In some ways the injury was great, because it took me out of the hypercompetitive, non-body-positive space,” she reflects. Rhee explored other forms of dance at Milton and Barnard College of Columbia University, where she was a dance and art history double major. After graduating, she apprenticed and studied under choreographer Bill T. Jones, who visited Milton in 2002.

“As a visual person, I started drawing as a way to notate movement very early on; if you’re working with other dancers and musicians, it’s a much more efficient way to communicate,” says Rhee, who during her residency last fall choreographed Les Parages, a solo dance film performed on the edge of West Woods, a beach facing Shinnecock Bay. In French, she explains, parages can mean ‘shoreline’ or a ‘general spatial vicinity around a site’ (dans les parages), while in English it means an ‘equality of condition or dignity.’ Les Parages is also the title of her solo exhibition at Ma’s House, which opened in November.

“I like the way that works as a metaphor for how we experience the land,” she says. “We think of the land as permanent, but it’s not; the shoreline is always receding and expanding.” Created in collaboration with Ma’s House leader and artist Jeremy Dennis (who filmed the performance by drone), Les Parages grew out of an Indigenous spiritual belief that souls enter the world from the east and leave from the west. “That was very moving; it got me thinking about the connection between the physical and spiritual worlds—the body and the cardinal directions,” Rhee says. “I wanted to film a dance that highlights the beauty of Indigenous land that is visibly different in the way it’s been stewarded, where it was not just me dancing—where it was as much about the shadows as the body itself.” 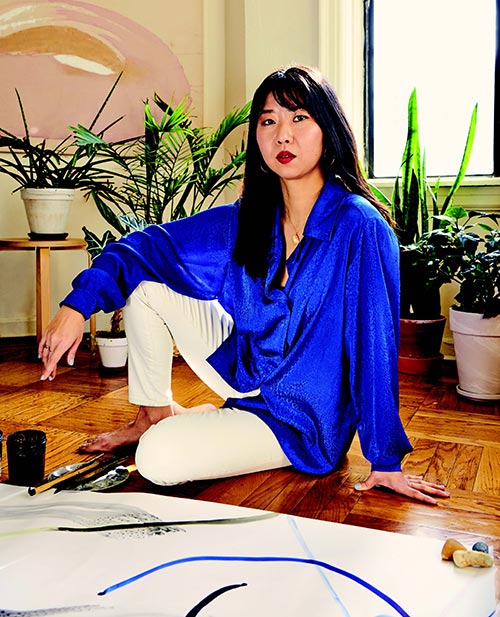 Out of that dance came Corporality, a work on silk using seawater, blue pigment, and soil pigment that creates what Rhee describes as a “drawing X-ray of the movement.” It’s an approach she’s been using since 2017. “The drawings all have very different forms, depending on the choreography,” she explains. Corporality is “almost a diamond compass-type form,” while others have more of a spiral movement or triangular shape.

Some artists and writers consider teaching an unfortunate distraction from their work, but Rhee doesn’t see it that way. A part-time professor at Parsons School of Design since 2017, she is now one of two faculty leaders for Sustainable Systems, a required course that asks students to consider the social, environmental, and economic impacts of the products, systems, and services they design. “I think teaching has made me a better artist,” Rhee says, noting that her research on sustainable materials, in part, drove her interest in using natural pigments. Students in the course might study how a company is creating textiles from kelp-based fiber, devise a system to upcycle ocean plastic into polyester yarn, or look to historic examples of design and art that have engaged in social change. “They’re asked to rethink what design and art can be,” she says, “and how to serve through creativity.”

The idea, says Rhee, is to empower— to instill a sense of love for and connection to the environment. “We all know that things don’t look great in relation to climate change,” she says, “but accepting things as they are isn’t an option for any of us, especially this generation.”

That spirit of connection to the environment is one of the driving forces behind a new land art project Rhee has undertaken. Working with a narrow sliver of forest in East Hampton that she acquired in January 2021, she has allotted an area for a garden. A grant from the New School’s Tishman Environment and Design Center provided support for the beginning stages of the project. With the help of friends and research assistants, she cleared a portion of the land and regenerated a three-square-meter area with cover crops, plants that return more nutrients to the soil than they take. Eventually, when the soil is ready, she hopes to plant a forest garden with indigenous plant species, pollinators, and significant plants from her multicultural background. The site measurement is a nod to Modernist dialogues around housing, but turning that dialogue around soil in the Anthropocene.

“The model I’m trying to activate on the land is one of stewardship vs. ownership,” she says. One inch of fertile topsoil, Rhee points out, can take anywhere from 500 to 1,000 years to develop. If industrialized agricultural practices that rely on existing pesticides and fertilizers continue, a 2019 United Nations study estimates, the world could run out of topsoil within the next 60 years. Shockingly, the origin of many chemical fertilizers contributing to soil degradation since WWII can be traced back to the industries of war.

“And while not all of us are farmers, many of us could be gardeners and steward our own small plot of land: our lawn,” says Rhee. “It would be so amazing if everyone who has a lawn could steward that soil properly. That’s one of the biggest tragedies of soil loss—that in countries as privileged as ours, with many large properties, we’re unknowingly degrading one of our most precious resources.” The thread of social justice running through much of Rhee’s work and her awareness of experiences particular to the BIPOC community have become more pronounced since the pandemic began. Like others who participated in the Black Lives Matter movement, Rhee now finds herself in a different place—a place that includes a fuller understanding of her own identity.

“One of the reasons the residency at Ma’s House was so important to me is that it’s rare for a space to be solely dedicated to BIPOC artists—and I don’t know if I would have been comfortable saying that I needed that support out loud prior to 2020,” she says. “Before I would have said, ‘I’m just an artist, I’m not any type of artist,’ which is valid. But then you realize, no, actually my embodied experiences have been very different. That has been a turning point.”

Rhee notes that many of the exhibitions where her work was featured in the past (at venues including New York’s The Kitchen and the Berlin Biennale’s KW Institute for Contemporary Art) were spearheaded by bipoc curators with keen socio-political agendas. One of her core missions as an educator has been to create a more just, well-balanced curriculum that represents more female and BIPOC artists. “I was always aware that the projects I was participating in had certain important social dimensions,” she says. “But it took the Black Lives Matter and Stop Asian Hate movements to ask myself more personally why I was drawn to them, and to face this important need more directly,” she says.

It’s a direction that is creating new confluences in the intersections that inspire Rhee and her work.

JULIA HANNA IS A FREELANCE WRITER LIVING IN ACTON, MASSACHUSETTS.