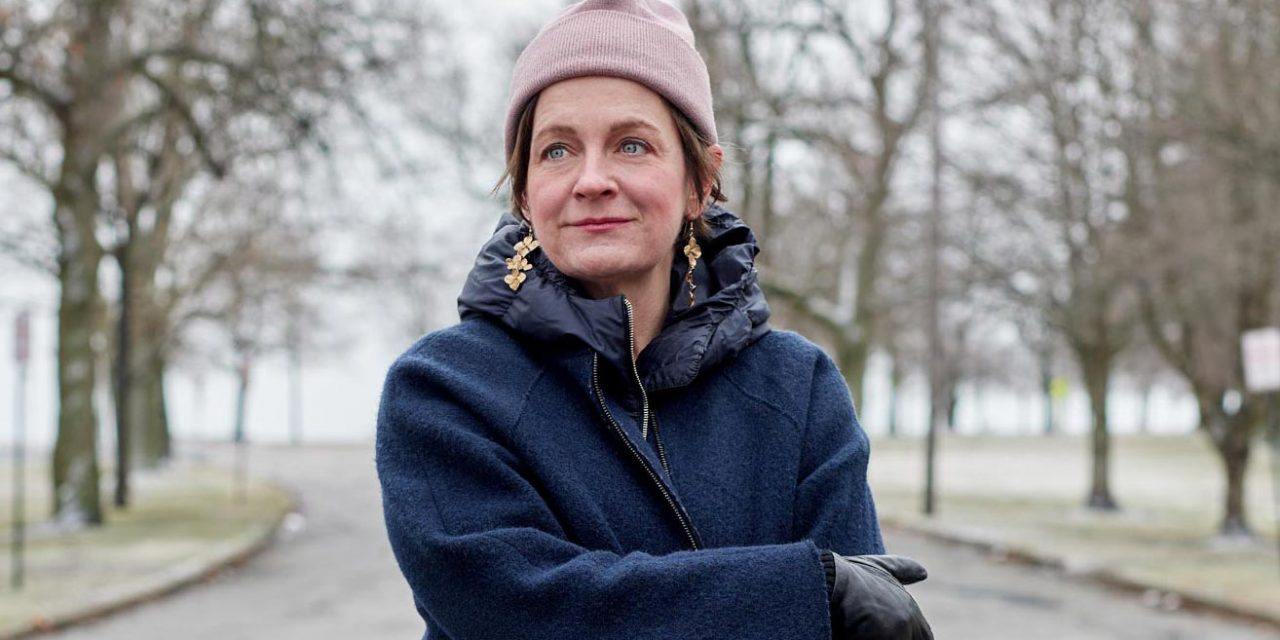 NAVIGATING BETWEEN THE CHALLENGES POSED BY THE NATURAL WORLD AND THE NEEDS OF HUMANKIND, LANDSCAPE ARCHITECTURE IS A PROFESSION THAT ENDLESSLY REIMAGINES THE FUTURE.

For decades, seaside park along the Connecticut shoreline has provided the residents of Bridgeport with 325 acres of sandy beaches and rolling fields. But as the city leadership moves to protect nearby neighborhoods from rising sea levels by elevating streets and erecting walls, residents are in danger of losing access to where they go to swim, play, and relax.

From her office at Reed Hilderbrand in New Haven, Connecticut, landscape architect BEKA STURGES ’90 describes how the impending loss of a neighborhood’s open space is a good example of the kind of problem that landscape architects are often asked to solve. As part of Bridgeport’s resiliency efforts, Sturges and her colleagues are working to rebuild Seaside Park, creating landforms of gentle slopes and hills that will protect the neighborhood from storm surge and provide a way for floodwaters to recede. The rolling landform will also allow easy connections between the park and the surrounding neighborhood.

“Landscape architecture is all about how you organize natural systems with human systems,” explains Sturges, who is a partner and principal at Reed Hilderbrand. “And within that, integrating civil engineering. We work to determine where the bridges, the roads, the conduits, utilities, and waste all go. What landscape architects do is help shape the environment so that both the cultural experience and ecological life are robust.”

“Basically water is always going to win, and people’s desires are also always going to win,” she says. “I like to say that what water is going to do and what humans want are the driving forces. And then there’s the reality: Where is the bedrock? What is the soil? How is the climate operating in this condition? And there are other factors: Is there an institution that has a certain mission, or is there a huge population explosion coming? Is there some technological advance that’s really interesting?”

Learning to ask questions is critical to the creative process, says Sturges. “If you can ask a question that hasn’t been asked before, if you always bring a curiosity and confidence that there is a way of imagining a solution, then you’re beginning to solve the problem. You’re asking, ‘What’s the future that we want to have, and how do we get there?’ And then, ‘What are the pitfalls? What are the past failures?’ A lot of creativity is about asking, ‘Where has there been darkness? Where have there been mistakes?’”

At Yale School of Architecture, where she teaches each spring, Sturges encourages students to do the same. “Teaching design is a creative act; it’s very improvisational and collaborative,” she says. “Models and miniature worlds emerge over the course of the semester. I am always encouraging the students to ask specific questions and to draw through their answers.” It’s a learning process that she herself was exposed to at Milton, she says, from teachers such as Renee Neblett, “who held my hand as I experimented with conte crayons,” she says, and JC Smith, “who kindly recast some of my coarser observations about Faulkner. They’ve shaped what I have to offer my students.”

Sturges had completed two years of a Ph.D. program in literature at Princeton University when she changed her career plans. The environment was always an interest of hers. (At Milton she was a member of the environmental club LORAX, and in her junior year she attended the Maine Coast Semester at Chewonki.) One day, while on break from her Ph.D. program, she sat at the Santa Barbara Botanic Garden in California, admiring the landscape and wondering how such stunning gardens were created. A course in drafting and an internship at a landscape architecture firm in Santa Barbara inspired her to take a different path.

After graduating from Harvard’s Graduate School of Design, Sturges studied urban agriculture on a multi-year travel grant. In 2005, she joined Reed Hilderbrand, a landscape architecture firm in Cambridge, Massachusetts. Eight years ago, Sturges opened a branch of the highly regarded firm in New Haven, where her husband, JACK HARRIS ’90, is a physics professor at Yale University (see story Looking for Quantum Signs in Everyday Life) and where she saw an opportunity to expand the firm’s reach.

Sturges is encouraged by how the profession continues to address the climate crisis. The field keeps raising its standards around mitigating harm to the environment. She recalls that on a project for the Clark Art Institute in 2009, which updated the institute’s 140-acre campus of meadows, forests, and streams, she and her colleagues were asking if the leed (Leadership in Energy and Environmental Design) standards for limiting impact on the environment were as good as they could be: “We pushed for more-holistic engineering and united the building and site water systems. It felt very novel at the time to raise those kinds of questions, but today, it’s expected. That heightened awareness has become normalized.”

Issues around equity have also become central to the conversation. “Our cities and our neighborhoods have not evolved equitably,” she says. Some communities, for example, have long been able to protect the natural environment while still having access to the land, whereas, in other communities, preserved lands are often inaccessible.

Two recent projects—one in Houston and the other in Cambridge— are changing that scenario. At the Houston Arboretum and Nature Center, situated within one of the country’s largest urban parks, the landscape architects at Reed Hilderbrand created a network of paths that allowed residents access for the first time to some of the park’s most vulnerable environments.

Learning to ask questions, says BEKA STURGES ’90, a partner and principal at Reed Hilderbrand, is critical to the creative process. “If you can ask a question that hasn’t been asked before, if you always bring a curiosity and confidence that there is a way of imagining a solution, then you’re beginning to solve the problem.” A few of the firm’s landscape architectural projects are above. HOUSTON ARBORETUM AND NATURE CENTER (left) At the Houston Arboretum and Nature Center in Texas situated within one of the country’s largest urban parks, the landscape architects at Reed Hilderbrand created a network of paths that allowed the city’s residents access to some of the park’s most vulnerable environments for the first time. CLARK ART INSTITUTE (center) A project for the Clark Art Institute updated the institute’s 140-acre campus of meadows, forests, and streams. Renewal of the campus provided better access and more-meaningful steward- ship to the much-beloved Williamstown, Massachusetts, destination. CAMBRIDGE URBAN FOREST (right) Since 2009, Cambridge, Massachusetts, a 4,500-acre city with 120,000 residents has lost more than 20 percent of its tree canopy. Reed Hilderbrand is working with the city to create a long-term urban forest plan that will mitigate future risks and prioritize investing in the city’s most underserved neighborhoods.

“Providing this kind of access allows people to value wetlands,” Sturges says. “We all know wetlands are instrumental in helping mitigate climate change, but if people only see them as swamps and don’t understand how they work, it’s hard to ask people to care for them.”

In Cambridge, which has lost almost 20 percent of its trees over the past decade, the tree canopy is sparser in the city’s underserved communities than in the more affluent neighborhoods. “In cities like Cambridge,” Sturges says, “you can still see the legacy of redlining by where the street trees are; it’s not quite a direct overlap between neighborhoods, but it’s close. There are temperature and health issues related to that kind of inequity.” The firm’s Cambridge Urban Forest project is designed to more equitably distribute tree plantings throughout the city’s neighborhoods.

“Conservation commissions are often delighted by our work because what we’re doing is providing ways to see and value these vulnerable parts of our environment and creating best practices and tools for preserving them,” Sturges says. “How do you take care of a forest? It’s a really important question that doesn’t get asked enough. What makes a wetland work? Why is the boardwalk configured to make sure that light can drop underneath it? Why is there shade for a wetland? We’re able to provide experiences that allow people to ask those questions and see.”

People are also surprised and pleased, Sturges says, by how modest departures from the expected can change how they feel and remember a place: “It can be as simple as the placement of found stones or the texture of a handrail.” 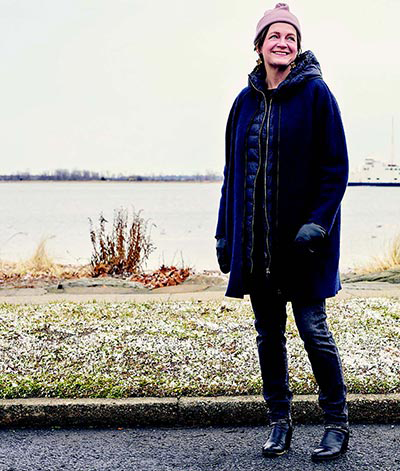 Sturges also sees progress at the personal level, as climate change and the covid pandemic have forced individuals to reconsider how they interact with the natural world. She points to the Netherlands, where, for centuries, citizens have been active participants in controlling their environment. Since so much of the country is below sea level, they have used earthen barriers, called polders, and canals, to control water and organize development.

Generally speaking, “in America, we don’t think about how we can and do design the environment,” she says. “We plant our trees and our parks, but climate change has created a sense of vulnerability that is helping all of us better understand some of the positive things we can do. If we plant more trees, take care of our wetlands, keep our water quality high, and stop polluting, we can mitigate its effects. This heightened awareness has made this amorphous, boundless, moving set of systems that are the natural world suddenly a priority and a point of design and intention.”

And covid has also sharpened people’s focus on the environment. “The fact that we have not been safe inside and have had to find ways to learn, play, and be with our communities outside has been a reversal in the idea that the outside world is unsafe and our interior is safe. The very idea of shelter has been a little bit turned on its head,” says Sturges.

“And think of all the regulations, many of which were created as temporary solutions during the pandemic— bike lanes and street closings that make more room for pedestrians and sidewalk restaurants and cafes—that are now being looked at to become permanent. People love these pilot projects. Hopefully, we will soon be able to take off our masks and go back inside, but there are many times during the year when it’s actually wonderful to be outside. I think some of this will stay.”

The willingness to ask the questions that haven’t been asked is what will continue to drive progress, Sturges says. “We need to always be asking, ‘What’s the future that we want, and how do we get there?’ People ask me all the time what actions they can take. Landscape architecture makes future environments; that’s what we do. It’s one of the fields that can provide a set of solutions and actions to help manage the damage and challenges of climate change.”