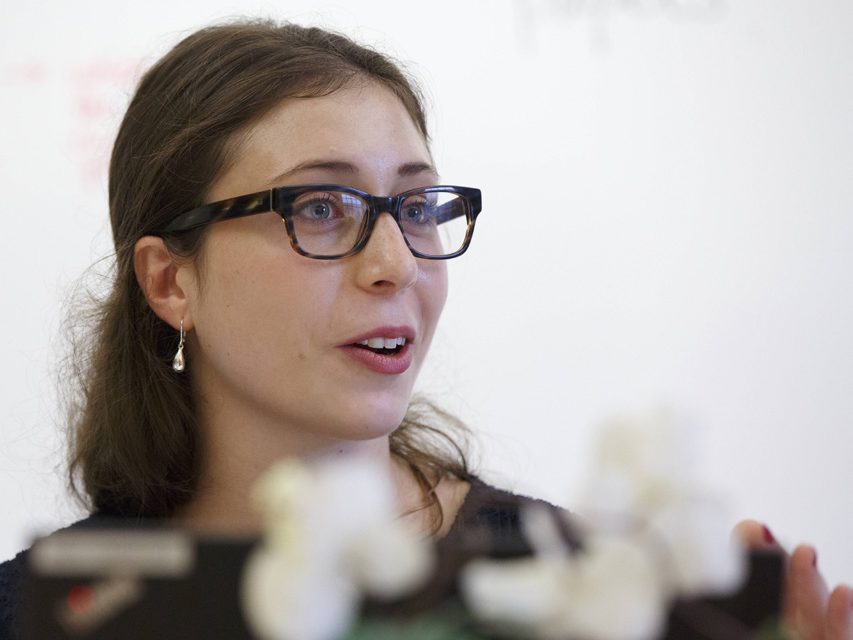 “When we reject the single story, when we realize that there is never a single story about any place, we regain a kind of paradise.”

So says the writer Chimamanda Ngozi Adichie, whose TED Talk on the dangers of single stories and exclusively dominant narratives inspired English department faculty member Olivia Robbins to ask her students to approach some of the world’s most studied texts from several new angles:

What arguments would volley between the members of the chorus in Oedipus Rex?

What would a minor character tweet about the events in The Odyssey?

How might writing yourself into The Inferno challenge your opinion of Dante’s moral authority?

In her talk, Adichie describes her first exposure to children’s literature: Though she lived in Nigeria, she had access only to British and American stories. When she began writing as a child, her stories featured white, blue-eyed characters living in snowy climates.

“I did not know that people like me could exist in literature,” she says. “The single story creates stereotypes, and the problem with stereotypes is not that they are untrue, but that they are incomplete. They make one story become the only story.”

Olivia, who earned her master’s degree from the University of Pennsylvania’s Graduate School of Education in the spring, spent the past two years in Milton’s English department as a Penn fellow. She joined the full-time faculty this fall.

Three seemingly discrete factors caught Olivia’s attention in her first year teaching Founding Voices, an examination of classic world literature. First, her students saw the works as they would artifacts in a museum. “The students were approaching the literature as if it were a statue, which gave them a singular understanding of what ancient literature was supposed to be,” Olivia says. “I really wanted to counter that notion, or make it more complex, and to make the literature more accessible.”

Second, Olivia noticed in classroom discussions that students crafted their comments to show mastery of the work, rather than listening and engaging with each other in the moment. Third, she noticed an absolutist attitude among students about their own abilities. “Some students were talking about disciplines as things they were either ‘bad at’ or ‘good at,’ and making blanket statements like, ‘I can’t do math,’ or ‘I’m going to fail that test,’” Olivia says. “Just because some things are more challenging for you doesn’t mean you’re a bad student.

Olivia decided to focus her master’s inquiry project, a thesis of sorts, on helping her students form counter narratives in Founding Voices. Working with English faculty member Jessica Bond, Olivia created a series of assignments that challenged students to view their reading through multiple lenses. The classes watched and discussed Adichie’s talk in the beginning of the year.

Students read works ranging from Gilgamesh to Medea, Ramayana to Macbeth. For this course, Milton’s English faculty have intentionally selected works with a broad geographic range, but there are consistent limits with foundational world literature: stories were written, typically, by men in positions of power, about royalty or members of a society’s aristocracy. Majoritarian stories traditionally center “heroes” who are white, male, middle- to upper-class and heterosexual. Research shows that using a counter-story can expose, analyze and challenge majoritarian stories of racial privilege (Solórzano and Yosso, “Critical Race Methodology, Counter-Storytelling as an Analytical Framework for Education Research,” 2002), and Olivia sought to challenge other dominant narratives in the same way.

After studying The Odyssey, students read The Penelopiad, a novella by Margaret Atwood in which Odysseus’ wife Penelope recalls the events of The Odyssey from her perspective, restructuring the narrative Homer has given her.

“The reaction from the students was, ‘You’re allowed to do this with books? You’re allowed to write from another character’s perspective?’” Olivia says. “Margaret Atwood is such a master of voice that she gives Penelope fire and opinions we don’t see in The Odyssey, where she’s in the background, crying and waiting all this time for her husband.”

Students were asked to retell the stories they read from the perspectives of minor characters, to “try on” an understanding of antagonists, and to keep discussion and feedback journals, in which they recorded both their participation experiences along with their successes, challenges and confusions with assignments. They debated, they wrote themselves into the stories, and answered questions about the works from multiple perspectives.

Students reported at the end of the year that they were able to feel more empathy toward minor characters and underrepresented voices in the text, and were better equipped to detect bias from the stories’ narrators. One male student, in retelling parts of Gilgamesh through the perspective of a temple prostitute, gave voice to a character whose actions are controlled by others and related her story to sexual abuse by clergy in the modern age.

“Over the course of the year, students ended up picking characters who are further away from them and their own experiences,” Olivia says. “Initially, they were more likely to choose someone who shared their gender identity or their racial identity, but as the year progressed, we’d see them trying on a perspective of someone who was different from them in terms of their identity markers.

“They retold the stories, and I had them keep authors’ notes to explain what they were trying to accomplish in the retelling, and they loved the activity,” she explains. “It feels very much like a fun and creative thing to do, but it’s sort of like slipping kale into a smoothie. You don’t notice it, but it’s healthier. For the students, it didn’t feel like writing an analytical essay, but they were, because they made arguments through the characters they chose to focus on, and how they portrayed those characters.”

Olivia employed what she describes as a “liberal revision policy,” which prompted the students to review and react to her comments, and they could meet and speak about ways to improve their analyses. Every student who attempted a revision improved his or her grade, with one exception, whose grade remained static.

Discussions around the Harkness table improved, as well, as students became more comfortable exploring other perspectives.

“I hear them using the terms ‘from my perspective,’ or ‘I understand where you’re coming from,’” Olivia says. “It’s not the language of right vs. wrong; it’s the language of ‘I hear you.’”