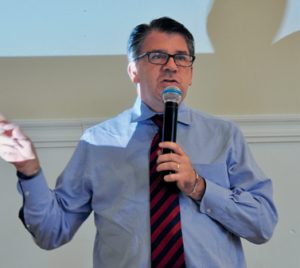 Young people have the power to stem the tide of anti-Semitism and other hateful incidents, said Robert Trestan, executive director of the Anti-Defamation League’s Boston Office. Mr. Trestan spoke to Class II students at the invitation of the Jewish Student Union. Prior to joining the ADL, Mr. Trestan served for more than a decade as director of civil rights at the Boston Housing Authority and previously worked as an assistant public defender in Naples, Florida. He received his J.D. from the University of Miami School of Law and his bachelor’s degree from Trent University.

“The most powerful thing you have is your voice. Speak out. If you do it collectively, you can make a huge difference.”