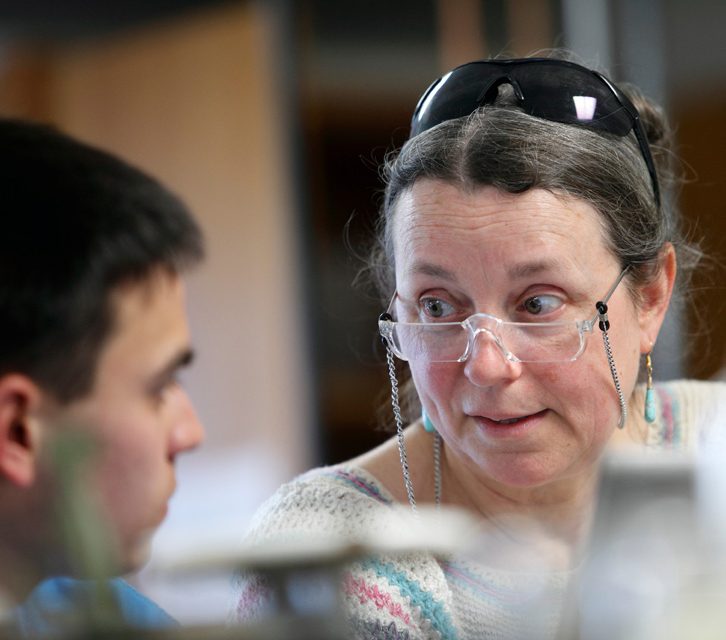 In Reconstruction in Philosophy, John Dewey wrote, “Scientific principles and laws do not lie on the surface of nature. They are hidden, and must be wrested from nature by an active and elaborate technique of inquiry.” In the 28 years Linde Eyster has been teaching at Milton Academy, she has been uncovering the hidden world of biology with her students.

In my time at Milton, Linde has been the heart and soul of our department, and a champion of the messy and yet productive process of scientific inquiry. When Linde came to interview for a job at Milton, she was serenaded by Tom Sando and Jim Kernohan. It is a miracle that she decided to take the job, but we are thrilled that she did. One of Linde’s former students said, “She had an ability to create a unique, tight learning community that really felt like a separate world in itself. She had a skillful way of evoking and harnessing our own curiosity such that it felt like she was more guiding us through this strange world than ‘instructing’ us in a top-down sense. It would be hard not to compare her to Ms. Frizzle from The Magic School Bus.”

Students who entered Linde’s classes were often intimidated for the first few sessions. Linde always expected a lot from her students, and this started from the first day of class. What they learned quickly was that her intensity was compassionate, and her expectations were equally strong for herself. I have had the distinct pleasure of observing many of Linde’s classes, and I can say that I have never seen a more thoughtful practitioner. In The Courage to Teach, Parker Palmer wrote, “Good teachers possess a capacity for connectedness. They are able to weave a complex web of connections among themselves, their subjects, and their students so that students can learn to weave a world for themselves.” Linde’s classroom weavings are beautiful and intricate, but never too showy or overly complex. She has an amazing talent to pace her classes for the students in front of her, and not for some exterior standard.

Linde’s teaching awards are many. She holds the Pratt Chair for teaching at Milton, she was the Norfolk County Science Educator of the Year, and she was awarded the Presidential Award for Excellence in Teaching. Linde inspired Milton Academy students to find their voice in Helix, our campus science magazine. She also has been instrumental in the development of the Honors Biology curriculum. While these awards and achievements are impressive, I would say that the impact she had on students and faculty each day will be her enduring legacy. I am a better teacher because I have been Linde’s colleague, and I am the tip of the iceberg. There are legions of former students inspired to understand their world through the lens of biology because of Linde. Milton Academy is a better school because of Linde’s time here, and her shoes will be hard to fill. It is with great respect and admiration that we say goodbye to Linde. I am confident that through her art, and because she is a teacher to her core, her impact on others will continue.