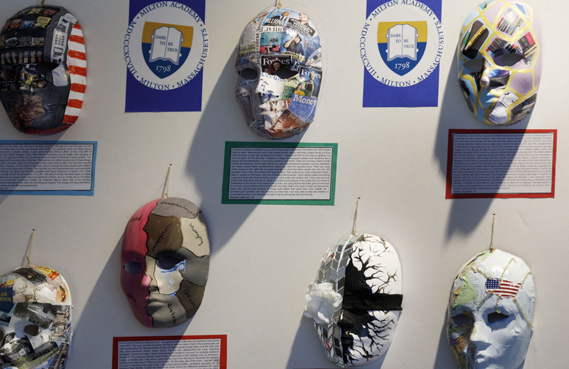 Lisa Baker and Alisa Braithwaite like to describe their ambitious new project—the Humanities Workshop—as a “reassertion.”

As faculty members in Milton’s English department, they need no convincing about the importance of the humanities to a well-functioning society, but with the intense focus nationwide on STEM subjects (science, technology, engineering, and math), they believed it was time to reassert the humanities’ significance for younger generations.

Developed in 2017 by Lisa and Alisa and launched during the 2018–2019 school year, the project-based Humanities Workshop gave students from a consortium of five Boston-area public, private, and charter schools the opportunity to experience firsthand how the humanities help shape and address society’s most critical challenges. In its first year of operation, more than 1,000 students rolled out a range of projects focusing on issues related to the workshop’s first theme—economic inequality, from how the lack of access to healthful foods impacts low-income communities to how access to mental health services affects academic performance for students from various socioeconomic backgrounds.

“What we’re making very literal through the Humanities Workshop,” Lisa says, “is that skills learned in humanities classrooms can be applied to very real-world problems.”

As Lisa and Alisa began thinking about how best to convey this message, one of their first steps was to talk to leaders at the Humanities Action Lab, a coalition of universities and nonprofits in 40 cities that collaborate to produce humanities projects across the country. In 2017, encouraged by the organization’s success and its support for what the Milton teachers hoped to accomplish, they began developing a plan and pitching their idea. In the end, 22 teachers in the language arts, English, history, theater, and art departments at Boston Latin School, Academy of the Pacific Rim, Boston Collegiate Charter School, Boston College High School, and Milton Academy came on board.

“As far as we know, this is one of only a few efforts at the secondary-school level to connect public, private, and charter schools in meaningful collaborations,” Lisa says. 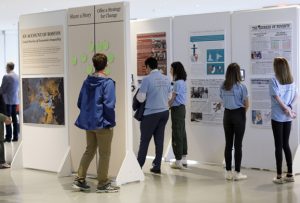 Lisa and Alisa chose economic inequality as the project’s first topic because, they say, it’s a subject that many, including Milton students, struggle to talk about. “We talk about race, we talk about gender,” says Alisa. “It’s in the air, but we don’t want to talk about economic inequality, particularly in a country where we have the ‘American Dream.’ We thought this was the perfect opportunity to allow ourselves to really delve into that challenging subject.
It’s timely and it exists on a local, national, and global scale.”

It’s also a subject, they say, that cuts across many issues—such as health care, public transportation, and education—and across all segments of society. “Even those among the top 10 percent of earners don’t feel their own wealth,” Alisa says, “because of the extreme difference between their circumstances and those of the very wealthy.”

The program was designed to allow teachers free rein in how they approached the subject. “We wanted this to be an opportunity for teachers to experiment, to change up their curriculum, and to really challenge their students in different ways,” Alisa says. “It was exciting to see the many different ways they chose to explore the topic.”

Students identified a myriad of relevant issues. At Boston Latin School, they conducted interviews with Chinatown’s longtime tenants to measure the degree to which gentrification has caused financial insecurity and affected their culture, education, and overall happiness. Others investigated how access to transportation affects student participation in school and after-school activities. At Boston College High School, students looked at how recent changes to federal regulations regarding legal status have affected Boston’s Haitian community. And at the Academy of the Pacific Rim, they shared personal stories about the lives and challenges of their family members.

Students collected data through research and by conducting a multitude of interviews with individuals in Boston’s neighborhoods, academics, school administrators, medical professionals, and city- and state-level officials. They presented their findings using various platforms, including blogs, poster displays, and videos.

In May, the culmination of the schools’ efforts was on display at the Edward M. Kennedy Institute for the United States Senate in Boston. At a kickoff celebration on May 19, students presented their findings and were on hand to answer questions. The event also included a panel of activists, academics, writers, and civic officials, moderated by Boston Globe Spotlight Team editor Patricia Wen.

An important component of the Humanities Workshop, say Lisa and Alisa, was giving students a chance to experience project-based learning. “We see a lot of this type of learning in STEM and we see a lot of it in product development,” Alisa says, “so we wanted to imagine what kind of workshop we could create for the humanities that would end with a product that an audience could encounter and learn from.”

Looking back over the past year, Lisa and Alisa are pleased with what the new initiative has accomplished. Teachers from the five schools reported that the workshop has engaged their students in ways that the students had not been before. In the coming academic year, Lisa and Alisa will be assessing the project’s strengths and weaknesses, choosing the topic for the following school year, and writing grants to make the project self-supporting. For 2020–2021, they hope to double the number of participating schools.

“What we came up with is nothing new,” Lisa says. “We all know from our own experience that if you sit down with people to talk about their side of things, you suddenly feel closer to understanding things from their perspective. Human narrative has always been at the heart of building connections across divides. That’s something the humanities traffic in. Literature, learning others’ languages, and looking at problems in a historical context allow us to shift how we perceive the world. These difficult societal problems are not just a series of numbers; these are robust, complex issues that are hard to untangle.”