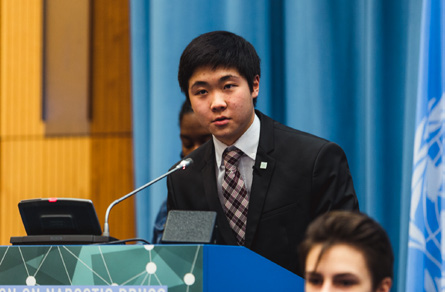 Over March break, Alex Wang ’21 represented his home country of China at the Youth Forum 2019 held by the United Nations Office on Drugs and Crime. Alex was one of 42 youth delegates from 33 countries who gathered in Vienna over three days to share their experiences and ideas on topics such as drug-use prevention and rehabilitation.

“It was so interesting,” Alex says. “Although I’ve lived in a few different countries, I’ve never been to an event with people from around the world. It was refreshing and informative to hear their ideas, and then to share my ideas.”

The forum was composed of workshops and discussions, culminating in the writing of a formal statement. Alex was one of two delegates chosen to read the statement at the opening of the annual meeting of the United Nations Commission on Narcotic Drugs, the organization that supervises the application of international drug-control treaties.

“Our conclusions were that young people should be engaged in the process and that youths can play a part in communities regarding issues such as drug control,” Alex says. “Last year, the youth delegates created a guide for member states, so in our statement we encouraged members to use that guide.”

One important lesson he learned, he says, was that the reasons for drug abuse may vary depending on the economic circumstances of a country. “In places where there is an absence of food, some people turn to drugs. In other communities, drugs are just easily accessible.
It’s important to first encourage some countries to raise the quality of life. In countries where that’s not a problem, the work should be on spreading awareness and early rehabilitation, because just focusing on prevention isn’t going to work.”