Harrison Blum ’98, Taking the Mystery Out of Mindfulness 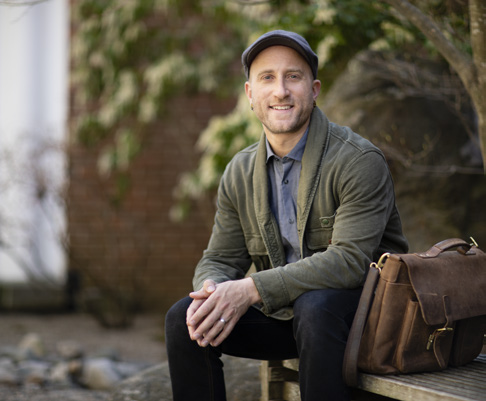 If Harrison Blum ’98 is meditating near you, you might not know it. His practice of Buddhism and mindfulness meditation help him stay present with his thoughts and feelings, so any walk from one Amherst College building to another, or a quiet pause between meetings, is an opportunity for presence and deep reflection.

Harrison is the director of religious and spiritual life at Amherst. He uses meditation as a way to attend to joyous and stressful feelings alike—confronting them in the moment instead of shelving them away.

“It doesn’t always feel comfortable, and I think that’s a big misconception,” Harrison says. “There’s this idea that you’re not good at meditation if you don’t stop thinking and feel happy, but meditation and mindfulness are not about erasing the tape, or stopping thoughts, or effortfully changing your mood. They’re really about stopping resistance toward what is happening, so stress tolerance is a by-product of this meditation. Understanding your life is an outcome. It’s about being present amidst—not editing—your life.”

Harrison’s path toward Buddhism and practicing mindfulness, which began at Milton, has led him to work as a spiritual counselor to critically ill hospital patients, volunteer with low-income populations, and serve as a college chaplain.

Tucked two blocks away from Amherst’s campus center and the nearby downtown, the Cadigan Center for Religious Life is located in an unassuming converted mid-century modern house. Its heavy brick exterior belies the airiness of Harrison’s office: with its white walls, thoughtful decor, and floor-to-ceiling windows, the calming space complements its occupant’s demeanor.

Harrison is soft-spoken but deliberate in his word choices. He doesn’t speak for the purpose of filling silences. He classifies himself as agnostic, and was attracted to Buddhism in part because it’s not based in a belief in a god. He believes he is the first non-Protestant to hold his position at Amherst. 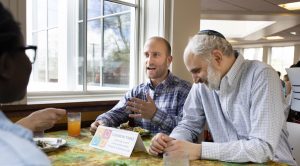 “I was raised Jewish, but I was also enough of a spiritual free agent that by the time I started learning more about Buddhism, it felt like a great fit, not only in terms of academic study, but personal practice,” he says. “There is a holistic mind, body, and heart framing with techniques to practice that can increase self-awareness and harmony in relationships.”

At Amherst and in Harrison’s previous chaplaincy jobs at Emerson College and Northeastern University, students are seekers, whether they come from a religious tradition or not, Harrison says.

“Secular is not the opposite of religious, necessarily,” he says. “We have students who are fiercely curious about what it means to be alive; students who are thoughtful about living consistently within their morals; students who are really passionate about identity, and equal access, and protecting identity. Ideas about what things mean, who matters, and who is saying what matters are relevant inside and outside of faith.”

Harrison emphasizes the importance of correctly defining “mindfulness,” a practice central to his understanding of spirituality. Pushing away emotions—the prized Western notion of grinning and bearing it—only amplifies them when they finally arise. At the same time, intrusive thoughts can be paralyzing, and mindfulness helps practitioners identify useful thoughts versus debilitating ones. The practice can also help people move past foregone conclusions about situations that provoke fear and anxiety.

“If we can be real with ourselves and receptive to what is true for us, that can help us be with our emotions in the moment and also put aside thoughts if we need to,” Harrison says. “It helps to put thoughts in their place. We might be able to learn from them, but sometimes thoughts are just thoughts. They don’t need to define who we are or what’s happening. We don’t need to believe all of our thoughts.”

Mindfulness, he says, is giving attention without judgment to the present moment and feeling all the “extra layers of desire or aversion that come with attention to a given moment—being in touch with how your body feels and what kind of thoughts or emotions are happening.” His website, movingdharma.org, offers several guided meditations to help people tap into their present sensations.

Harrison’s interest in Buddhism began in history classes at Milton, first in U.S. History with Mark Hilgendorf, who was “the kind of teacher who loved wrestling with big ideas.” During his senior year, Harrison established a world religions independent study with Mark, which became a class mid-year after several other students wanted to join. Buddhism intrigued Harrison, who studied it at the University of Pennsylvania and Hampshire College and spent some time in Nepal. His major was a study of American representations of Buddhism.

After college, Harrison spent several years as an early education teacher and completed a master’s of education before deciding to attend Harvard Divinity School. While at Harvard, he interned with the Buddhist chaplain at MIT. His first postgraduate job was as a part-time Buddhist advisor at Northeastern, which initiated his career in college chaplaincy. Six months into that position, he also began working on an adolescent psychiatric unit, where he stayed for three years.

While at Harvard, where Harrison earned a master’s of divinity, he began applying mindfulness and meditation across different faiths. During the summers and as part of his thesis research, he launched the Mindfulness Allies Project at a Cambridge community center that served low-income populations, typically people earning less than $15,000 a year. The classes included meditation instruction, embodied mindfulness practices, and conversations on power and oppression. Attendees told him that the practice helped them become more attuned to their physical needs, release fear and anxiety, and even strengthen their connections with God. From those sessions, Harrison was asked to visit a Pentecostal Christian outreach group and train church leaders.

“When we talked about mindfulness, it could be framed as helping to love yourself the way Jesus loves you,” he says. “I think there is great interfaith potential for the types of experiences a mindfulness practice can provide.”

The ability to find common connection among religious traditions has served him well. As a resident chaplain for Boston’s Brigham and Women’s Hospital, Harrison was regularly called upon to pray with patients in critical-care units.

“In moments where I’ve been called to pray or speak from a sacred place, I’ve had experience doing that in interfaith ways that don’t presume a certain theology or even a belief in God, while at the same time not excluding believers,” he says. “I spent a lot of time doing overnights, getting paged, going to patients’ rooms for a lot of different reasons. I did a lot of reading and reflecting to find a way to offer prayer for believers, even if I was uncertain myself.”

During moments between seeing patients—on elevator rides and down long hallways—Harrison would check in with himself: giving attention to his footsteps and heartbeat and breathing while processing the sometimes heavy emotions he carried in that job.

“It’s not about pushing out or fighting emotions but allowing the moment to be exactly what it was, and allowing it to pass,” he says. “Then, by the time I got to the next patient’s room, I could be fully present with them and what was happening in that new place.”