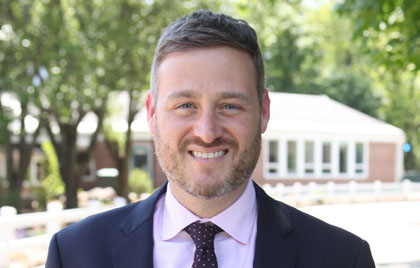 New Lower School Principal Frank Patti is spending this year building relationships with the faculty, students, and families who make up Milton’s kindergarten through fifth-grade community.

“I think that our youngest learners can be the most curious and excited learners,” Frank says of working with lower-school students. “It’s so incredible to be part of that process with them, when they’re asking questions and they really have the entire world at their fingertips. Being a part of helping kids get those building blocks that they will need in middle school, high school, and beyond is such a privilege, and it’s also a lot of hard work. Working with this age group, you’re beginning to see the kinds of young adults they will eventually become.”

Frank joins Milton after spending 15 years in New York City independent schools, beginning at the Collegiate School. Prior to arriving at Milton, he worked at the Hewitt School for seven years, where he served as the head of the lower school and dean of the faculty.

“I am delighted that Frank has joined us as Lower School principal,” says Head of School Todd Bland. “He is a gifted educator with extensive experience working with the faculty to assess and implement innovative curricula and has a proven record of advancing institutional diversity efforts.”

The move to Milton is a homecoming of sorts for Frank. He grew up in Belmont, Massachusetts, and when he and his husband decided to move back to the Boston area with their daughter, he learned of the opportunity at the Lower School. Joy was palpable in the classes he visited, he says.

“The moment I stepped foot on campus, and the moment I was in the Lower School classrooms, it just felt very familiar to me,” Frank says. “There are a lot of similarities with Hewitt—everything from the quality of teaching, to the passion of the teachers I met, to the small class sizes and individual attention to students. It’s a rigorous environment but a nurturing one at the same time. I immediately felt at home.”

Milton’s work on diversity, equity, and inclusion also attracted Frank to the School. Hewitt has been engaged in similar work, such as educating young students about social identifiers, providing multicultural education and activities, and working with faculty members on culturally responsive teaching.

Like Milton, Hewitt is a K–12 school, and Frank has experience with the benefits and challenges such a complex environment presents. The establishment of new traditions at Hewitt, including matching seniors with kindergarten “buddies” for moments throughout the year, has proved to be a unifying force at Frank’s previous school.

“At Hewitt, it had always been a goal to integrate the lower school into that K–12 experience,” he says. “Those partnerships between older and younger students can become really meaningful connections.”