The Many Milton Hats of Josh Jordan ’11 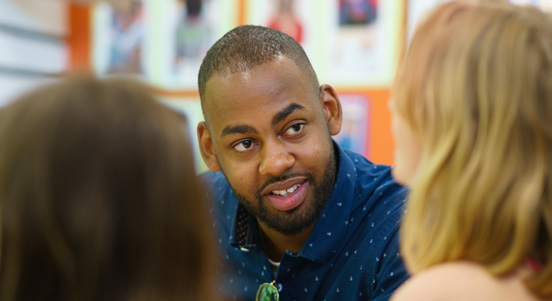 When people ask Josh Jordan ’11 how he came to know seemingly everyone at Milton Academy, the answer is a bit complex.

Many members of the Upper School faculty were his teachers, mentors, and coaches; now they’re his colleagues. He serves on the Staff Committee. He coaches several Upper School sports teams. He spent his college summers planting and landscaping the campus with the facilities department. He’s worked in the Middle School’s after-school program—a job his father, a Boston schoolteacher, also held at one point. Josh now spends every day in Lower School classrooms as a floating teacher and substitute, going where he’s needed by Milton’s youngest students.

“I like to joke with the kids that I have a stunt double,” he says. “I’ll pop into a classroom for a bit and then see the same kids minutes later when I’m on lunch duty. I’ll ask them if they’ve seen my twin anywhere. Having this versatility, I’ve been able to get to know every student from kindergarten through fifth grade, which I love.”

At the start of each school day, Josh helps students from kindergarten through Grade 2 get settled in, and he understands the importance of kicking the day off right. “A lot of times, I’m the first person they see at school in the morning. I realize how important that beginning of the school day can be, and if I can find a way to make them laugh and be silly, it’s the most beautiful thing. I want to get them off to a great start.”

As a student, Josh transferred from Randolph High School after meeting Milton football coach Kevin MacDonald during a summer football camp. The change was challenging at times, but as Josh settled into the School, he developed some lifelong friendships and had a transformative education with the help of strong faculty mentorship.

“It’s so amazing to come back and be able to soak up even more knowledge from these people who meant so much to me when I was younger,” Josh says. “I feel so lucky to see how they work together to make this place run.”

Josh’s best friends are fellow Milton alumni, and he sees similar friendships developing among the students he coaches. In the Upper School, Josh is the head coach of the JV boys’ basketball team, which finished the season in a tie for first place with a 16–4 record. He attributes their success to their dynamics as a team and their enthusiasm for supporting one another on and off the court.

“Most of them played together as freshmen, and some even played together in the Middle School,” Josh says. “They really all love not just the sport of basketball but being together. I could tell them, as an alumnus, my favorite times at Milton were with the friends I met in those moments. For this team, it’s led to success on the court.”

During summers at Salve Regina University, where Josh received a degree in elementary education, he came back to campus and worked in the facilities department. He loved the work and the crew, so he returned for the summer after graduation, and eventually a position opened with the Middle School after-school program. Substitute teaching opportunities brought him over to the Lower School, where his role has continued to evolve.

In the Lower School, Josh co-teaches CAFE (Cultural Awareness for Everyone), a weekly lunchtime drop-in session where fourth- and fifth-graders explore issues around different aspects of identity, such as ethnic and racial identities and privilege. This year, Josh presented a session on Afro hairstyles and textures, at which he shared a short film he and a friend made to highlight the significance of barber shops in black communities. He ended up sharing it across the Lower and Middle school communities.

Josh wants Milton’s youngest students of color to feel perfectly at home at school, which is why you might see him in Forbes Dining Hall having lunch with a group from the Lower School and some Upper School students he knows from coaching.

“There is a lot of power in that,” he says. “Having these older kids as role models feels really great. It’s not always formal, but being an alum and being able to make that space to form these relationships means a lot to me. And it’s an opportunity to build real connections across divisions, so the students can see this is a whole K–12 community.”