Lovers of Language: Students find answers to contemporary issues in the classics

At Milton, there is no such thing as a “dead” language. Here, the classics are alive and thriving, and students can choose to continue a Milton tradition of Latin or Ancient Greek — languages that date back roughly to the 6th century BC and the 9th century BC, respectively.

One cold, wintry morning, four students enter Jesse Sawyer’s basement classroom in Straus Library. It’s first period, and not everyone is fully awake yet. They write their Ancient Greek homework phrases on a whiteboard, such as:

With enthusiasm and gentle prodding, Jesse, who is chair of the classics department, has the students break down the translation word by word. This is the introductory class, Intensive Classical Greek. The work is hard, and students make mistakes, but they also have fun. Jesse stresses that there is sometimes more than one answer. “I want you to be thinking about translating these in different ways,” he says. “I want you to make choices.” 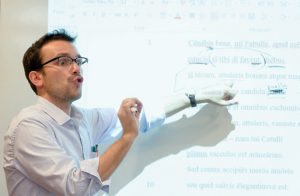 For most classics students, the path begins with Latin. Freshmen start with Latin 1 or, if they studied in the Middle School Latin program, they track into Latin 2 or Latin 2/3. Once they have mastered the basics, students can take classes in Latin lyric poetry, Roman philosophy, Roman historians, and selected readings that students choose themselves.

Intensive Classical Greek is open to students who have made it through level four of a language, but according to Jesse, those with a Latin background tend to be in a better position to understand the method.

“In Greek 1, we do a lot of comparisons,” Jesse says. “Often I’ll describe something to them in Latin because that’s their entry point into the Greek texts. Unlike Latin 1, the pace is pretty fast, and it requires students to demonstrate their ability for a lot of memorization work. We require those disciplined habits that go into foundational language work. There’s no time for the learning curve, so they really have to kind of hit the ground rolling.”

“Classics fits well into a liberal arts education,” Jesse says. “In an English class, you read 30 pages a class. In a Latin or Greek class, you’re going to read 30 lines. It’s a different, slower reading. The word philologist — a lover of words and stories — best describes those who are interested in the classics. We read to savor every bit. Sometimes that detailed work can be onerous when you’re trying to figure out your subject and your verb. But other parts can be really rich, when you can understand the subtlety of language and the depth of thought that goes into that writing.”

Most classics students end up passionate about the languages, and the department offers opportunities outside class to expand their learning. Every other year, a March-break trip alternates between Italy and Greece. This year, the department created student clubs for both the Middle and Upper Schools, which meet after school. Daphne is the faculty advisor for both clubs. The Middle School club focuses on Certamen, a quiz-bowl style game for students of Latin, Greek, and classical civilizations. Club members will compete this year at Boston Latin School and Harvard University. The Upper School club engages in activities including Certamen and casual presentations that students make to one another and the faculty.

“It’s a nice way to supplement our curriculum,” says Daphne, after a presentation in which Advanced Greek 1 students showed a slideshow about the Parthenon. “It’s so nice to have all these students rapt and listening to their peers.”

Idone Rhodes ’20 took Latin in Grade 7 and Ancient Greek her sophomore year. Taking Latin was more of a parent decision, she says, but the language drew her in. Taking Ancient Greek was on her initiative.

“You get so much more out of an English class when you have the foundation of the Western tradition that we’ve been reading about in our classics classes,” Idone says. “Classics also helps us connect to contemporary issues, such as how the structure of the U.S. government functions, or to social issues, such as a woman’s role in the family. These are all social constructs that we’ve inherited from the classical tradition. Being able to make that connection is important, because you want to be able to see how we as a society have improved, how we have evolved, and what parts are still alarmingly similar.”

In her sophomore year, Idone went on the Milton trip to Greece, and this past summer she went to Italy for six weeks through a UMass Amherst archaeological dig at an Etruscan site outside Siena. She also published a piece about domestic violence in antiquity on a classics blog run by a Brandeis University professor.