Math is the ‘Most Interesting Subject in the Whole World,’ Omayra Ortega ’96 Tells Students 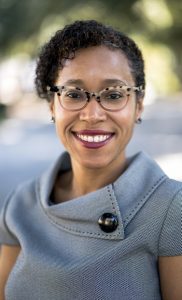 Students in the GAINS (Girls Advancing in STEM) Club welcomed OMAYRA ORTEGA ’96 for a virtual visit, during which she discussed her work in statistics and mathematical epidemiology and what led to her career as a college math professor.

Ortega’s route to applied mathematics and epidemiological research was “nonlinear,” she told the students. Now an assistant professor at Sonoma State College, where she teaches statistics, Ortega majored in math and music at Pomona College. A bad experience in a general chemistry class made her rethink the idea of a pre- med track.

“I wasn’t focused on science, specifically,” she said. “I was a pure mathematician; I was interested in theory. Math was this complex, intricate game, and I wanted to play…. Math is the most interesting subject in the whole world. It’s just puzzles all day.”

Studying math at a high level does not just prepare theoreticians; it opens a world of possibility for different careers, Ortega learned. It wasn’t until she participated in a summer research experiment at Cornell’s Mathematical and Theoretical Biology Institute that she realized she could combine her love of math with science without becoming a medical practitioner. Mathematical models could help in the development of medical treatments, predicting the spread of infectious disease and much more.

After learning that fewer than one percent of all mathematics doctorates were award- ed to Latina women, Ortega became determined to get her Ph.D. in math. She did so at the University of Iowa, where she also got her master’s in public health. Today, a focus of her work in academia is mentoring and encouraging students of color in STEM. She also directs the Mathematical Epidemiological Research Group (MERG) at Sonoma State and is the president of the National Association of Mathematicians Inc., a nonprofit promoting excellence in mathematics and supporting the development of underrepresented scholars in the field.