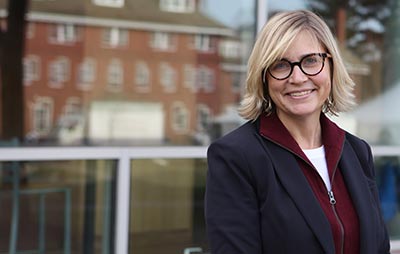 After holding various spiritual and community development roles at Milton for 16 years, Suzanne DeBuhr has moved into a new position as an Administrative Council member: director of restorative practices.

DeBuhr, who is also a faculty member in the History and Social Sciences Department, took the role—a new position at Milton—midway through the 2020–2021 academic year. Milton began considering restorative practices in 2017, after students staged a walkout to protest the school’s handling of racist social media posts. The initiative, by Dean of Students José Ruiz and former Associate Director of Admission SARAH WOOTEN ’04, helped in identifying the need for the new role.

“In the early stages, we’re figuring out how to educate the community about what this work is going to look like, which is an evolving and organic thing,” DeBuhr says. “Restorative justice addresses [the incident], but it’s also effective for looking at the whole and trying to understand what led to the incident. It’s not just about resolving one occurrence but going into the past, going into the relationship, and thinking about what repair needs to be done.”

Aside from the longer-term work of preparing to expand restorative practices at Milton, DeBuhr partners with the school’s Department of Equity, Inclusion, and Justice, where she works to investigate, mediate, and help resolve bias incidents at both the student and adult levels.
A restorative system is one that focuses on the repair of harm in a conflict between parties, rather than punishment directed toward the person who caused the harm. Restorative practices also rely on proactive community-building, so DeBuhr introduced circle practice to Milton employees, partnering with Suffolk University’s Center for Restorative Justice for training. Circle practice, or being “in circle,” has its origins in Indigenous conflict-resolution methods, and requires all participants to think about their role as individuals within a greater, but deeply interconnected, society.

“It’s about the people, themselves,” DeBuhr says. “And it’s about their relationships and what went wrong—not in the person, but what went wrong around the person—to result in the harming of a relationship. It asks of everyone involved to tell the truth and take responsibility in a way that allows everyone to move forward. It recognizes that harm is never only between one person and another.”
Instead of punishing or publicly shaming someone for doing something harmful, repairing relationships is a more community- focused approach to most conflicts, she says. It has applications for many situations, including student-disciplinary matters and conflicts between work colleagues.

“American culture is hyper-individualistic: You have to take care of everything on your own,” she explains. “Having restorative processes as part of our practice means that we don’t have to do it alone. It means that we’re in this together, that there is a community of support, and that, yes, we’re going to have conflicts and we’re not always going to get along with one another. But we can build skills to help resolve those issues and even train people who can help negotiate difficulties.”

DeBuhr is working toward her master’s degree in restorative justice from Vermont Law School. She received her bachelor’s degree from St. Olaf College and her Master of Divinity from Harvard Divinity School.