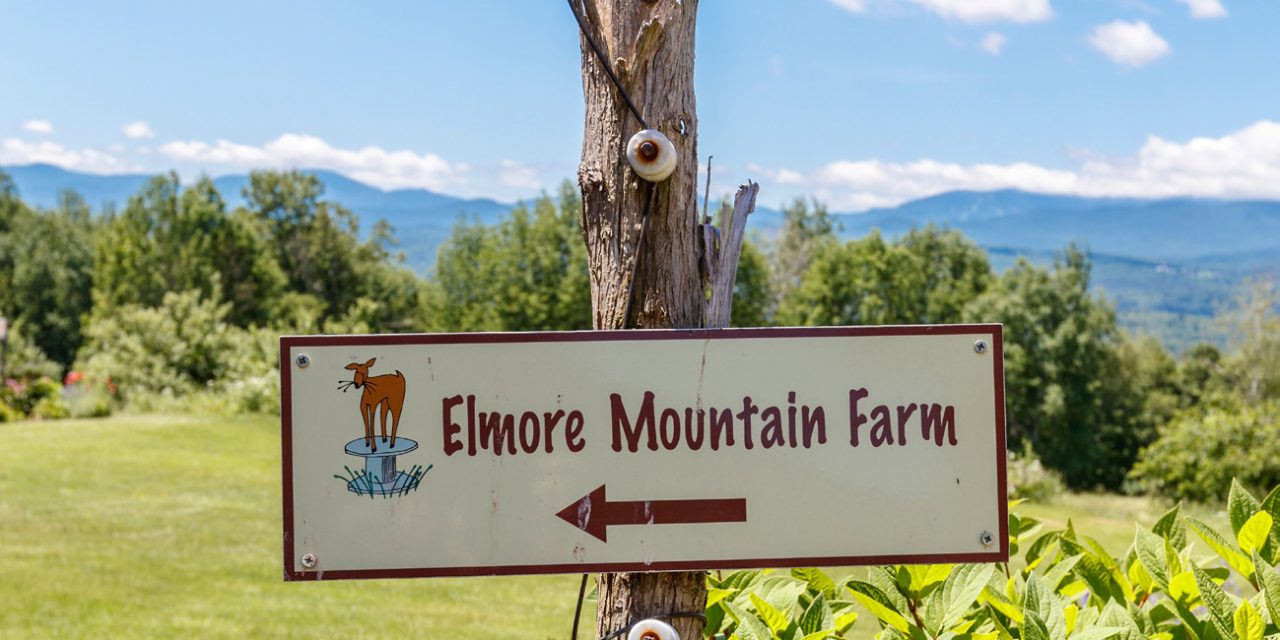 Bunny Mauran Merrill might just own the best-smelling barn in Vermont. Duck under the cobwebs into the dimly lit, 19th-century, red wooden barn — be sure to stop and say hello to Helen, the goat matriarch of the place — and follow the scents of lavender, bergamot and lemongrass to a door in the far left corner.

Inside you’ll find a cozy workshop; metal racks hold thousands of discs of soap, laden with essential oils, waiting to be wrapped in cheesecloth and shipped out. Shaped like honey-colored hockey pucks, the hand-crafted goat milk soaps were the first products from Elmore Mountain Farm Soap Works, the natural body care company that Bunny and her husband, Peter, run.

“There’s something incredible about making soap. I love how simple it is, how natural it is. A lot of heart and soul goes into it, and I so appreciate that something I make is appreciated by others,” Bunny says. 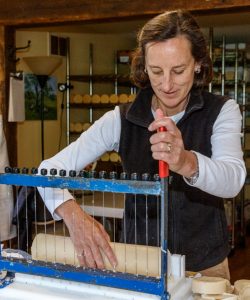 The inspiration came from a friend who gave Bunny some handmade soap in the summer of 2005. She and Peter had goats at their farm, so she thought she’d try her hand
at making soaps to give as Christmas presents. Using books and Internet tutorials as a guide, she developed a recipe and made soap in the kitchen of her house, which overlooks the ski trails at Stowe Mountain.

“Christmas came and went, and I was still enjoying it,” she says. “I took over half the garage. I thought, I’d better find something to do with it, because I can’t just let it pile up.”

By the summer of 2006, Elmore Mountain Farm soaps were selling in a natural bath and body store in Stowe. The first reorder came quickly. “We started in one store and have grown every year. I’m not one of those people who ever had a plan. It just happened,” Bunny says.

“We’ve been able to run it profitably and in a way that has been satisfying for us, both in terms of scale and in the products that we’ve offered, and the customer relationships we’ve developed,” Peter says.

Each soap sold under the Elmore Mountain brand bears a label, designed by Peter, featuring a cartoon goat lathering up. On their utility balm, the same goat is leading a horse; for their maple syrup, the goat is in flannel, tapping a tree; and a goat sprawled on a massage table, surrounded by candles, is the symbol of the brand’s massage oil.

The company also makes private-label products for other companies, including the Stowe Mountain Lodge spa, the Alchemist brewery and SmartPak Equine. Their products are available in shops and co-ops throughout New England, and online. Bunny estimates that 85 to 90 percent of the business is wholesale.

“We’re in a smattering of Whole Foods stores around the Boston area, and we’re in pretty much every store in Vermont where we would want to be,” Bunny says.

That’s not to say that enterprising fans don’t track them down. Although the road in front of the farm has no signs or obvious indication of the business — and the workshop is not set up for retail — visitors have stopped by, like a group from China who showed up one day, unannounced. 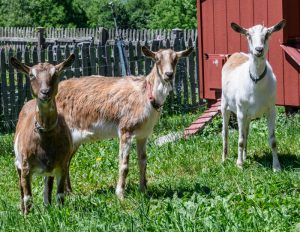 Nothing is wasted in production: the baling twine used to secure the soap’s cheesecloth packaging is thinned by hand, so the company gets more from each spool. Bunny remembers getting funny looks as she pulled apart threads of twine while watching their two sons’ soccer games and mountain bike races. Scraps of soap left behind during the cutting process are recycled into discs and paired with parsley for Elmore Mountain’s “Green Soap.” The goats’ milk is stored in a commercial freezer before it’s ready to use, and everything is meticulously dated.

It took time to tweak recipes before Bunny found the right formula — she jokes that she was not a chemistry scholar at Milton or Middlebury College. Every book and tutorial she read seemed to encourage the use of palm oil, a common ingredient in household and beauty items whose harvesting has caused deforestation in tropical climates.
As she perfected her recipe, she removed palm oil from Elmore Mountain products.

Product lines expanded with requests: A friend suggested a rosemary-scented soap, so Bunny developed a rosemary-lime version. The same happened with a geranium-lemongrass soap. Their veterinarian was the inspiration for a non-petroleum-based farmer’s balm; then his assistant requested a lavender utility balm to protect herself and her horse from bug bites. During a phone call with the owner of a store in northwestern Vermont, Bunny was prompted to make lotion.

“He asked, ‘You mean you don’t have a goat’s milk lotion?’ I said no. He said, ‘Well, that’s stupid,’” Bunny recalls. “One product led to the next. My second product was lip balm. Then, a friend requested foot balm, because she had dry, cracked feet. It’s interesting to look back and see how all the different things came about.”

Donning protective goggles, Bunny combines lye with natural plant oils, goat’s milk, water and pure essential oils to make an emulsion that she then pours into cylindrical molds. Once the soap sets, she extracts it from the molds and cuts it into disks using equipment Peter custom-built for the workshop. “The natural fats provide a bubbly lather without drying, and goat’s milk is the gentlest base for human skin,” Bunny says. The essential oils provide lasting, but unobtrusive, scents.

“So much of soap-making is getting the ingredients measured, melted, mixed and ready to go,” Bunny says. “The saponification process, during which the lye reacts with the other ingredients, happens very quickly, and you only have a few minutes to pour the mixture into the molds before it starts to set up.”

The soap is left to cool overnight before Bunny pushes it out of the mold, then cuts it into the discs. On a given day, she’ll make between four and eight batches, with about 90 bars per batch. The soaps rest a few weeks to harden before being packaged and shipped.

“Bunny makes it sound easy, but a lot of trial and error went into developing formulas that she liked and that she could rely on to consistently produce high-quality bars of soap,” Peter says.

The farm’s four goats are valued members of the team. Their milk is used in Elmore Mountain Soap products, and Bunny and Peter also buy milk from other farms. Their younger goats — Gretel, Farley and Mo (the pair are named for the novelist Farley Mowat) — are a mix of Oberhasli and Alpine breeds, while Helen is a pure Oberhasli. With striking, golden eyes and soft coats, the goats are voracious eaters; during an April visit, they munched on old Christmas trees and pretzels. They spend their days exploring a large, fenced-in paddock with a pair of elderly chickens.

“Like every animal, the more time you spend with the goats, the friendlier and more lovable they are,” Bunny says.

Besides Bunny and Peter, two other employees, one full-time and one part-time, work in production for the company, making for somewhat tight quarters in the busiest seasons. The couple have hired carefully — personalities matter in small spaces.

Peter estimates the company shipped between 50,000 and 75,000 bars of soap in 2017, in addition to other products. The workshop, efficient as it is, is currently at capacity, and Bunny and Peter find themselves at a juncture: move the business off the farm and into a larger commercial space — or sell the brand. Bunny worries about losing the farm-based feel of the business, while Peter’s focus is already shifting to his new role as Vice President of Sterling College. They have decided to sell the business. Staying put with Bunny and Peter will be their maple sugaring business, and the goats. They’re family.

“We’re proud of what we’ve created,” Bunny says. “It’s been such an interesting, wonderful ride, and we really hope the next owner shares our passion and vision. On the one hand, it’s hard to walk away from something that’s become such a part of our lives and identities; on the other, it really feels like it’s time to hand it off to someone who’s ready to take it to the next level.”