Coaxing Pinot Noir to Be Its Best Self, Web Marquez ’97 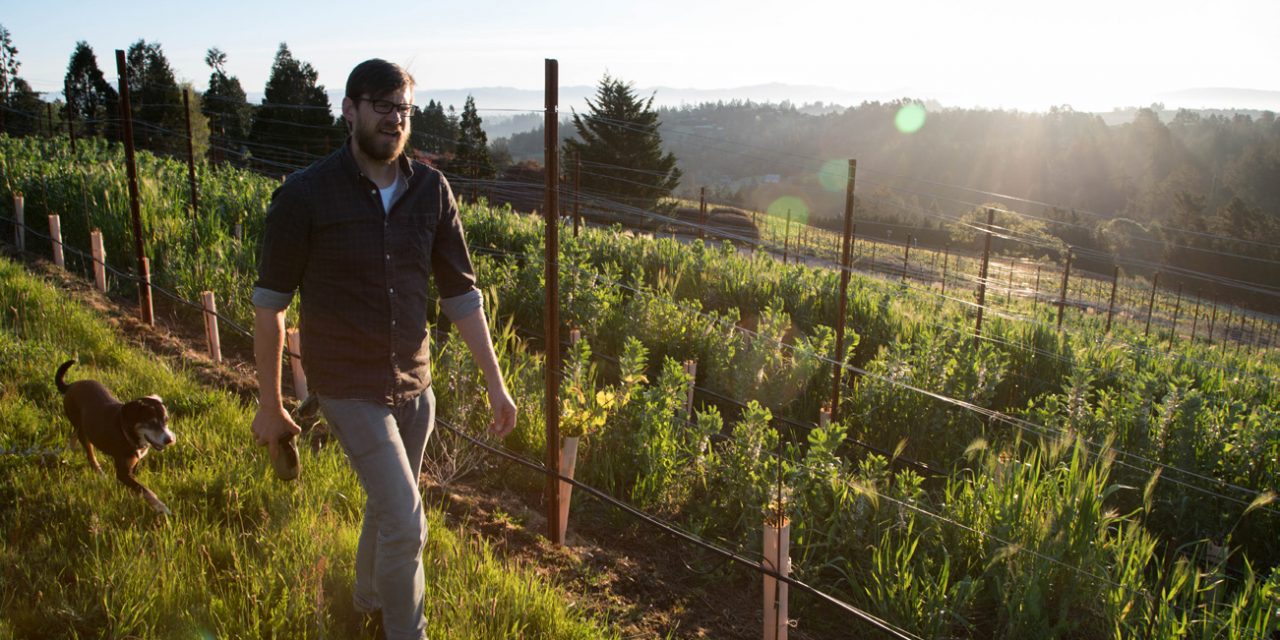 Web Marquez, a relaxed, plaid-shirted California entrepreneur, and his cheery Entlebucher Mountain Dog, Stevie (a female Stevie), are clearly at home in this cool, high-ceilinged cavern of a barn, with muscular towers of oak wine barrels surrounding them. Web has set up a slender, rectangular table with ready glasses, matched with opened bottles of Anthill Farms wines, evidence of his craft. The Sonoma winery that he and two partners started in 2004 has attracted attention across the country. Food and Wine Magazine named Anthill Farms Winery its Most Promising New Winery in 2009.

Web tries to get at the root of what the wine-making endeavor means: “The French word is elevage,” he says. “You are raising the crop, as you would a child.” You take the grapes, build them up, and help them become the fullest version of themselves.

The arc of winemaking is hugely appealing to Web: “It’s as elemental as growing a vine in dirt,” he says. “The same rules apply to grapes as they do to strawberries or blueberries, or rhubarb. There’s equipment in common, and there’s working hard, hand in hand with the people who do the labor. But in the end, you create something that people seek out, and drink at fine restaurants.” 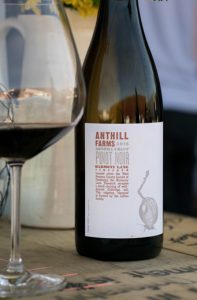 Web had been inclined toward an academic career, imagining a professorial role, when he studied political science at the University of Virginia after Milton. A close look at the underside of academia discouraged him, however. Then a summer job at Deutsche Bank in London took the idea of working in an office off the table.

In the meantime, thanks to a tip from a girlfriend, he started a weekend job serving wine in a tasting room at a Virginia winery. He found himself reading books about wine in the back room during downtime, getting more and more into the art and the science. Eventually he persuaded the winemaker to let him help out. “I’d help pick on the weekends, I’d pick up fruit boxes, move them around, I’d wash floors. I spent two years washing floors, pretty much. That was my college job.”

The owner offered him the job of running the tasting room when he graduated—“just a retail manager’s job,” Web said, but he took it and eventually also became an assistant, or apprentice, doing vineyard work (at about $18,000 a year, living in a cheap apartment, existing on cabbage and beans).

“But it was like going to school,” Web says. “I got tons of good experience. Virginia was a great place to learn, because it’s so painful to make wine there. It’s hard.

“It’s hot, it’s cold, it’s wet. It rains all summer. You could have a great vintage, and everything is going hunky-dory, and a hurricane comes through in September, or remnants of a tropical storm. And then every grape disease known to mankind is on the East Coast. You had to learn how to work the vines in such a way where you mitigate those problems. I couldn’t have imagined just how thankful I’d be to have learned in Virginia.”

In 2003 he moved to what he calls the center of the industry, and found a job as a harvest helper at Williams Selyem. Wineries need three or four times the normal work force from August through November, when they bring in the grapes, make them into wine, and get it into barrels.

Getting experience in making wine happens by working, so harvest helpers interested in the industry follow a Northern Hemisphere harvest with one in the South. Web went to New Zealand, and afterward worked in a vineyard in France, near Nîmes — then returned to California, working at Rutherford Hill in Napa. 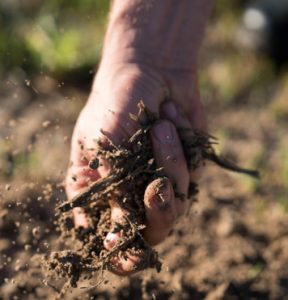 “The wineries need bodies, but experienced bodies are better, hence the desire to flip over a season in one place with a season in another. People need to move things around with their hands, clean things, and move grapes through various pieces of equipment. That’s not necessarily skilled work, but wine is so sensitive, processing methods really matter. They are directly reflected in the quality of wine. So you need to care. And the tough thing about wine is that you only get one chance every year to do it.”

Wondering whether he should go back to school, Web explored degree programs at the University of California – Davis, Fresno State, and Cornell, to find that he’d need to get a second bachelor’s degree, centered in the sciences, then complete a master’s in viticulture of enology.

While contemplating these steps, Web says, “I just lucked out.” He started working in a wine lab in Healdsburg (Sonoma), “and then it just built from there.” He and his friends started Anthill Farms at the same time (2004).

“There’s an old joke about how to make a small fortune in the wine industry,” Web says, “which is to start with a large fortune.” He and his friends used another strategy: “Let’s start while we’re young, while we can live cheaply. We could have other jobs, and do our own thing for free. That’s three people working.”

To start the company, they each put in $2,000. That first year they had three tons of grapes, some purchased and some in return for their taking care of a vineyard. They made seven barrels, and that felt huge. They were happy. “Let’s keep doing this,” they decided.

“We don’t have identical palates,” Web says about himself and his partners, “but we have the same approach toward making wine,” which is why they have specialized in pinot noir.

“Although few things about wine are empirical,” Web says, “there’s no grape that shows place so transparently as does pinot. Pinot doesn’t insert its personality between an expression of place, the vineyard, to your mouth. Pinot is a lens through which you have a sense of time and place.” They aim to have their winemaking process as consistent, and almost formulaic, as possible. That allows the vineyard itself to shine through, which is their goal.

Fine wines and “supermarket wines” differ in one key way. With supermarket wine, Web explains, the winemaker is trying to emphasize sameness. You choose a zinfandel from “x” winery because it’s predictably within a tight range of a certain taste. The winemaker adjusts the grapes in the barrel to achieve this goal. It’s harder winemaking, because you’re adjusting something that is different every year, to make something that tastes roughly the same.

“With fine wine,” Web explains, “the wineries are trying to emphasize difference: different vineyards, and vintages, the specific qualities of those different vineyards,” like soil, sun, air, pruning and managing agricultural issues that emerge. The point to their effort, Web contends, is to allow the differences to express themselves. 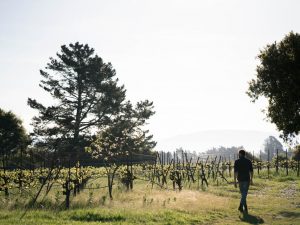 Musing about the Anthill Farms 2016 Abbey-Harris pinot he has just poured, Web enthuses: “What’s so cool is that you can think about it almost like an x-y graph, where you have a line for place and a line for time, and that wine is right where they cross. It’s literally an expression of what the summer of 2016 was like in that place.”

“I often describe the pinot texture as crystalline: it’s clear, straightforward, it has a sense of presence without much weight,” he continues. “The structure comes from acid, which is what makes pinot so food-friendly. Acid makes it quenching, too. One mark of a good wine is that it has a long finish: you can taste it for a long time. You could empty your glass and smell what’s left over.”

Vineyard ownership and winery ownership is often separated in California today, unlike the familiar paradigm of the estate-owned vineyards, where visitors stop into the stucco-
and-tile building where the wine is made from the grapes outside. Instead Anthill Farms either buys grapes, “and we only work with vineyards that we’re allowed to be super crazy about where the growers follow our growing specs,” Web says, or they lease vineyards, which means that they are responsible for the farming.

Growing the vine is not difficult, but farming it so that the fruit is balanced with the vegetative growth, and achieving good concentration in the grape, is the challenge. With the wrong cropping, the fruit can quickly lose the flavor compounds, the tannins and other elements, and end up very generic tasting. Achieving organoleptic balance, it’s called. Improving yield is an annual challenge as well—deciding when and what to clip: “Flowers versus baby-sized fruit, versus fruit that’s bigger, versus mature fruit,” Web says. Accruing experience happens one vineyard, one harvest at a time. “A decision I make on a fluke, on a Saturday in the summer, we can end up talking about four years later,” he says. Information from nearby wine labs and the opinions of colleagues can help, but every decision is his own. Attention to detail is essential. Subtle things really matter, in the growing and in the processing.

Web’s group has only added vineyards over the years — never dropped one. “We do the same thing over and over, so that way you really know the vineyard. Since you only make wine once each year, it takes a long time to really get to know each vineyard.”

Web is the general manager at Anthill Farms (the three founders started paying themselves 11 years into their venture), but his first love is the farming itself.

Most days, Web has his hands in the dirt. “I love that. And also, that there’s a whole universe of applied theory to it all, too, that you can talk about. So does having nearly daily contact with all different types of people: from the people in the field with him, and other farmers, all the way through “the billionaires who come out here to hire you to do some new wine project.”

There’s a gilded aspect to the wine industry, and a mystique. Web says the mystique label might be an earned one, because it is “literally mysterious.” But the gilded idea is one that comes from the outside. “For those of us who are doing it, it’s not necessarily a fancy life.
It’s a fun life, and a really fulfilling life.”

Anthill Farms makes eight single-vineyard pinots and two appellation wines each year. Depending on the vintage, they will also produce two or three syrahs and a chardonnay. Anthill Farms releases their wines to their mailing list, and to restaurants and wine shops in locations across the country.