A Master Class in Make-Believe 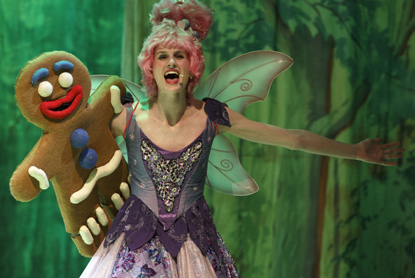 The playwright who wrote the lyrics and book of Shrek the Musical took in Milton’s performance of the show last spring — and there’s no bad seat in the Ruth King Theatre. Afterward, Pulitzer Prize-winning playwright David Lindsay-Abaire ’88 answered plenty of questions from cast and crew, and let them in on aspects of his career in the performing arts. Here’s a sample.

Q: What inspired you to write Shrek the Musical?

A: I wrote a play called Fuddy Meers and when it opened in the West End of London, it was produced by Sam Mendes, who is a well-known film director. It was his idea to turn [the 2000 film] Shrek into a musical. He went to Dreamworks and said, ‘I want David Lindsay-Abaire to write it because his sense of humor is so weird and absurd.’ I had never written a musical. I like to say yes to things I’ve never done before. 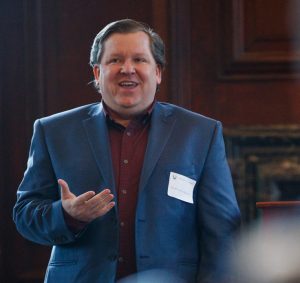 Q: Do you have suggestions when it comes to colleges and training for theater?

A: There are lots and lots of places where you can study theater. My greatest advice is to read a lot of plays. Do a lot of scene work in acting classes, and try to get into plays, but just absorb everything — and read and read and read. The more plays you read, the better an actor you’ll be.

Q: What shows did you do when you were here?

A: We did Arms and the Man. I played the Friar in Romeo and Juliet. The Class IV play was A History of the American Film, a musical by Christopher Durang. I then went on to read all of Christopher Durang’s plays and tried to steal his style. Then, when I got into Juilliard, Chris Durang was my teacher. He was the guy running the program. He just retired three years ago, and he asked me to replace him.

Q: If you could simplify your writing process, how would you describe how you go from idea to finished product?

A: I have about a dozen ideas in my head for things that might be turned into a play. I live with them for a long time. If they don’t go away, I think, ‘Maybe there’s a play here.’ I’ll take two or three of those ideas and smash them together.

Q: How would you recommend dealing with harsh criticism, and people who tell you you’re not going to be successful in this field?

A: You know what to do, right? You ignore them. The work has to be more important than their opinion. The best thing I’ve ever done was to keep going. It hurts, and ignoring them doesn’t take the pain away, but if you stay with it long enough, you develop a thicker skin, and it hurts less. When you open a show in New York, you’re going to be reviewed by 25 different publications, so no matter what, there are going to be reviews that are critical. You push those aside. And you sleep with the nice ones under your pillow. 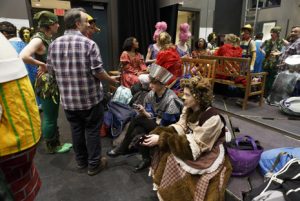 Q: What about writing Shrek did you enjoy most?

A: The best part was getting to know and working with Jeanine Tesori, the composer. Afterward, I said to Jeanine, ‘Let’s do a musical in the same way that I’d write a play, where nobody else is involved. It’s not based on a movie that everybody knows; it’s not produced by a Hollywood studio.’ And we just finished our first draft of a musical.

Q: Did you know when you were our age that you wanted to be a playwright?

A: I wrote a lot of plays when I was at Milton, but I didn’t know that I would be a playwright. After we did A History of the American Film, my classmate suggested we do a Class III play, and said I should write it. And so I wrote a play in 10th grade, and another in 11th grade, and then for my senior project, I wrote a musical about a co-ed prison, called Inside Outside. It was not good. Then I went to Sarah Lawrence College, mostly to be an actor, and just kept writing plays to fill up my theater program. It wasn’t until I got into Juilliard that I thought, ‘Oh. Maybe I’ll do this playwright thing.’