Stories That Reach for a Fuller Truth

Mae Ryan’s wide-lens, tortoise-shell glasses could be a metaphor for her alert, unblinking view of anything she decides to examine. Her unfolding but already celebrated career as a visual journalist is rooted in a love of photography, she says, a focus for her at Milton, and an abiding artistic point of departure as she gained multimedia experience.

In 2014, Mae became the Guardian’s first U.S.-based video producer, and her documentaries and interactive projects garnered a raft of prestigious national awards. Those included the Edward R. Murrow Award in Investigative Journalism (video) for The County (2016), and a News and Documentary Emmy – New Approaches, and first place National Magazine Award – Best Multimedia, for Beyond the Border (2015). 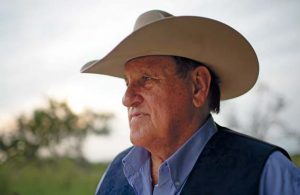 Lavoyger Durham, ranch administrator
in Falfurrias, Texas, helps other ranchers
supply water stations for illegal migrants
traveling through ranchlands to avoid a
border crossing station. They want to stem the tide of deaths. (from Beyond the Border)

Beyond the Border tells the story of the crisis in Brooks County, Texas, overwhelmed each year by the deaths of hundreds of migrants who leave the highway and hike through rugged, parched ranchlands to avoid a border checkpoint. In four video segments that expand print stories, economically drawn but palpably real characters sketch what’s happening on the ground. Scenes play out under a searing sun, or in pitch darkness pierced by the spinning blue of officials’ roof lights. Some local ranchers band together to set up water stations for the migrants, who die most often from dehydration and heat: “I’m a human being. They are human beings. They all have people who love them. Most of our fellow ranchers don’t want these people to die,” one rancher offers. Dr. Mike Vickers speaks for some other ranchers in Brooks County: “This is a war, here; we’re fighting a war.” With “like-minded Americans and patriots,” he says, he formed Texas Border Volunteers, to assist the Border Patrol in turning back “the invasion.” A young Guatemalan mother tells about resigning from her diplomatic post after making too many calls to families about their relatives’ deaths. A soft-spoken county sheriff, ceaselessly working with the fraction of his staff that hasn’t resigned, along with volunteer deputies, strives fruitlessly to stem the smugglers’ tide and to respond to the horror of families’ lost and dead relatives in the hills. He pleads for his country to understand the need for immigration reform. “This has got to get better,” he says.

“Sheriff Martinez,” Mae says, “was really in the middle of an international crisis and was getting asked to do well beyond what he was really capable of doing.” Working on these videos, Mae spent nine days interviewing people whom her collaborating colleagues helped to select. “The timing was a bit crazy,” she says, “because that’s when a lot of women and children started coming across the border, which we hadn’t planned on. No other news crews were there. . . . I was still pretty new to the job and was in the middle of something so much bigger than I thought it would be, just trying to capture as much of it as I could.”

The characters who drive Mae’s stories open up to her, she explains, because when she simply asks questions and listens, conversations happen. “Working in journalism has made me more extroverted,” Mae says, “more open to other people and experiences, which makes it easier to have conversations with people who aren’t like me.”

Vigil of family members in Bakersfield, California, remembering their loved ones killed in officer involved shootings. (from The County)

The County, published roughly a year later, sheds light on Kern County, California, where in 2015 law enforcement officers had killed more people per capita than in any other American county. Thirteen people were killed in Kern County, and in the same time period, according to the Guardian, nine people were killed by the New York Police Department across the five counties of New York City, where 10 times the number of people live. Internal, department-led inquiries into the shootings in Kern County exonerated all the officers of culpability, that year and over the past decade.

Once again, characters Mae tapped to tell their stories expose conflicting experiences and perspectives. Family members of unarmed victims, the police chief and the county sheriff, officers working their beats, local clergy—collectively they weave together the complex social fabric. Mae’s journalistic strategy offers a blank canvas, an opportunity for stakeholders to explain what’s real for them. The pace is calm. The tone is civil and open. Law-enforcement leaders advance storylines that are both predictable and insufficient for the victims’ relatives. In contrast, cops she accompanied during “ride-alongs,” were more nuanced, Mae says. “It’s not worth demonizing police officers, and that happens a lot,” she says. “In many cases, they’re the first line of defense when it comes to mental health issues. Some nights they go from one catastrophe to another. One night I was with an officer who had to take a child away from his mother with Child Protective Services. The mother, who was schizophrenic, was going through a breakdown, thought aliens were coming, and seemed as if she would commit suicide. This all happens within the span of a few hours, which doesn’t make it OK that some cops are shooting people. Police officers probably need mental health services of their own.”

Mae’s two prize-winning stories seem to express the full measure of an accomplished video storyteller. She would argue, though, that mastery of her craft is an ongoing challenge and the target is always moving. Each of her ventures figures in the impressive sum of her talents.

Right after Stanford, a photojournalism and documentary photography program at the International Center of Photography in New York honed Mae’s photography skills.

Then back across the country, to Los Angeles, where the NPR station KPCC hired Mae to do both photo and video for its website. A three-month grant allowed her to explore the various immigrant communities in LA. “I didn’t really know how to make videos well at that point,” she says. But the station gave her plenty of creative license, so she learned a lot about storytelling and about production. Also, Mae began working directly with Grant Slater at KPCC, who has been a creative and life partner since then. She and Grant produced an innovative series called AudioVision—a kind of visual podcast, Mae says.

Seeking a more national orientation, she took the position with the Guardian, where she was able to consolidate her storytelling skills and work on long-form documentary video. Ultimately, Mae parlayed the Guardian’s confidence in her work to develop Vagina Dispatches. With the Guardian reporter Mona Chalabi, and relying on women of all ages, gynecologists and counselors, this series of four programs shares basic, much-needed information about female anatomy. “It seems like such a simple thing, that could be addressed in middle school, but it never is,” Mae says. “And asking questions is hard. Women don’t ask their friends, let alone their mothers. Our vaginas and vulvas are so sexualized that women don’t feel they can learn about it. But you have to live with your own body on a day-to-day basis and figure out what’s going on!”

Millions watched the Vagina Dispatches and the program drew the attention of video journalists at the New York Times, which Mae joined in 2017. At the Times, as at all news organizations, the growth of video as a news medium has resulted in numerous experimental initiatives. “Digital video,” Mae explains, “is so tied to what social media platforms [like Facebook, Instagram and Snapchat] are doing.” If algorithms change, and the platform changes direction (shifts away from longer-form, investigative journalism, for instance), that can dictate the way creators define their video work. Having to consider the platform is both fun and frustrating, Mae thinks. “There’s a part of me that likes it, because you can experiment and try lots of things, and different things will resonate on different platforms.”

Mae’s focus at the Times shifted toward science and culture. “How Robot Hands Are Evolving to Do What Ours Do,” for instance, explains the striking progress in the capabilities of a robotic hand and artificial intelligence. The video elegantly highlights a magnificent hand and its manipulation of objects. Its visually simple, color-coordinated presentation was Mae’s idea, to contrast the typical creative chaos of a laboratory.

In one series, “The Interpreter,” Mae developed video representations of arguments that would ordinarily be made by columnists: “Is Something Wrong With Democracy?” and “National Identity Is Made Up.” “We wanted the textures to feel like you were looking at a newspaper, even though it was video. Working through the best way to visualize this concept was fun,” she says.

A fascinating cultural series called Dance in the Real World opens with jazzy, neon-lit graphics and shows popular, culturally rooted celebrations of dance, from New York and Tokyo to Trinidad and Tobago, where Dancing in the Air with Nine-Foot Stilts shows impossible moves executed with perfect choreography by people of all ages, men and women, boys and girls.

As I write this story, Mae is producing a documentary TV program—a series that is slated to air in fall 2019 on FX. She’s excited to be working in yet a new domain, where the format is established “and you can just really focus on the storytelling.”

The jury’s out about Mae’s next step after the show is complete. “I still like making shorter videos. Some of my story ideas would make good four-minute videos,” she says. “But I just like developing different skill sets and understanding how to work in different media.”

“News can be consumed in so many different ways and news organizations just have to be there for all of those ways,” she points out. “Donald Trump’s presidency has coincided with an increase in digital news subscriptions that insiders call the Trump Bump.” People her age, Mae asserts, realize the importance of an independent press, so many of the new subscribers are younger.

“The form may change; the platforms may change,” Mae says, “but at the end of the day, a good story is a good story, and people pay attention. Whether it’s something unexpected, or very ‘of the moment,’ people just respond to something that’s good.”