Medical News for a Vast Public 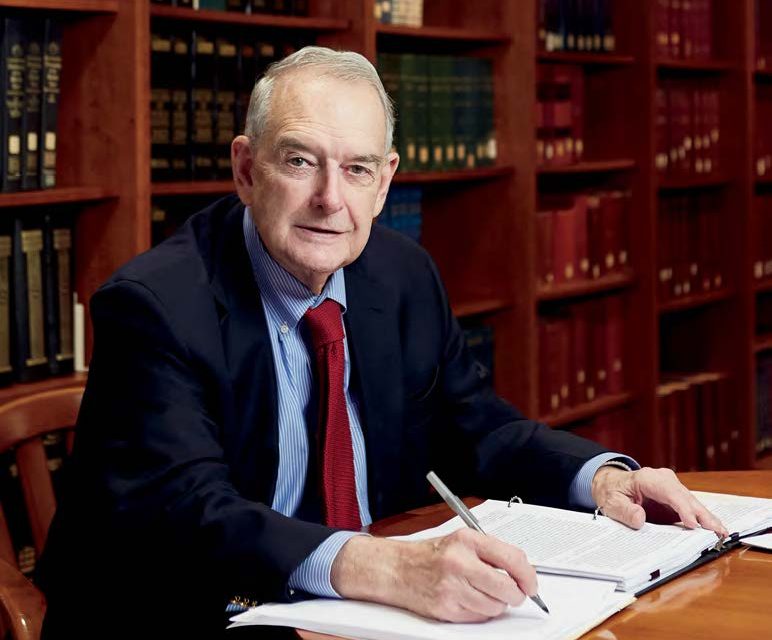 Larry Altman’s voice sounds the way his prose reads. His patient, calm rendering of facts makes you feel you’re in the presence of the kind doctor you’d like to have: trustworthy, knowledgeable, on the inside track of the latest developments. For a half century, Lawrence K. Altman’s byline has signaled to New York Times readers that important information about medicine and medical science is at hand, in accessible form. “As a medical journalist,” Larry says, “I always tried to approach developments the way a doctor thinks.” It is believed that he was the first medical doctor to work as a medical reporter for a daily newspaper.

After Harvard (1958), Larry earned his medical degree at Tufts Medical School (1962) and interned at Mt. Zion Hospital (UCSF) in San Francisco (1962–63). His next step speaks to the particular expertise and mindset—as an infectious disease specialist and epidemiologist—that Larry brings to reporting on current disease, patterns of transmission, and matters of public health. For three years he served at the U.S. Public Health Service’s Centers for Disease Control (CDC) in Atlanta, where he investigated disease outbreaks, and he edited the CDC’s Morbidity and Mortality Weekly Report, a journal dealing with reported cases of communicable diseases in the world. He helped set up a measles immunization program for eight West African countries, which later became the World Health Organization program that eradicated smallpox. Then, from 1966 to 1968, Larry was a resident in internal medicine at the University of Washington Affiliated Hospitals in Seattle. He joined the science staff at the New York Times in 1969.

Momentous medical events surface routinely, and Larry dealt with many during his early news career—such as the first appearances of the virus that would become Ebola, the investigation of what would be called Legionnaires’ disease, and the assassination attempts against President Ronald Reagan and Pope John Paul II. In fact, reporting on the attempt against the pope in May 1981 slightly held up publication of Larry’s article “Rare Cancer Seen in 41 Homosexuals,” the first New York Times’ article about AIDS, which appeared in the paper on July 3, 1981.

On the 30-year anniversary of that story, having written more than 900 AIDS-related articles since, Larry wrote a retrospective for the Times: “Thirty Years In, We Are Still Learning From AIDS.” He noted that those “dark early days” of the epidemic “were worth recalling as a cautionary tale about the effects of bafflement and fear that can surround an unknown disease and as a reminder of the sweeping changes in medical practice that the epidemic has brought about.”

Reports of young men with forms of pneumonia and cancer typically found in severely immunosuppressed individuals caused confusion and controversy. “In the earliest days we had little idea what we were dealing with,” Larry writes. “We didn’t know that AIDS was a distinct disease, what caused it, how it could be contracted or even what to call it.” Some experts thought an infectious agent was the cause; others thought it must be a chemical or toxic agent. Larry went on rounds with doctors at Bellevue Hospital in New York, where he was a faculty member, and at San Francisco General, University of Washington Hospital in Seattle, Emory and elsewhere. They visited patients whose symptoms would later be identified as AIDS. Then by phone, he and his physician friends discussed and debated ideas at length.

Breakthroughs did not happen until 1983 and 1984, when teams in France and the United States identified a new virus—HIV, the human immunodeficiency virus—that was sexually transmitted and severely damaged the immune system.

News coverage had been sparse. “There were few facts to be reported,” Larry comments. Then, beginning in 1983, “the nature of news coverage went from lethargic to hysterical,” Cari Romm writes in her Atlantic article “‘The Disease of the Century’: Reporting on the Origin of AIDS” (December 5, 2014).

Many had believed that the disease only affected gay men and it was outside their immediate concern. When cases among intravenous needle users and blood transfusion patients appeared, epidemiologists determined that transmission occurred though bodily fluids. Further, they were able to show that the disease could be transmitted through heterosexual sex. Doctors also learned “that it took about a decade to get sick from AIDS after HIV first entered the body” and “people had been unwittingly transmitting the virus for years,” Larry writes. The extent to which HIV and AIDS was a universal public health problem had been unappreciated.

In 1985, Larry reported from Kenya, Rwanda and Zambia as AIDS cases in Africa surged, among both men and women. He found ignorance and denial among African officials similar to that in the United States four years earlier. Although he saw confirmed AIDS patients in Nairobi, Ministry of Health officials continued to deny that AIDS existed there. “On rounds at the central hospital in Kigali, we had to dodge the pots and other items thrown by menacing patients,” Larry recollected to Dana Talesnik writing in the NIH Record. “Although the doctors welcomed me, many patients did not.”

“Because health officials and journalists used the phrase ‘bodily fluids,’ instead of specifying semen, blood and vaginal secretions,” Larry writes, “many people feared they could contract AIDS from toilet seats or drinking fountains.” Misinformation was widespread; paranoia escalated. Journalists’ headlines and media reports fanned the flames. “It is the virtual certainty of death from AIDS, once the syndrome has fully developed, that makes the disease so frightening, along with the uncertainty of nearly everything else about it,” Time reported in 1985. Patients bore the burden of public misunderstanding: they were stigmatized, isolated, shunned—even by relatives, friends, and their doctors.

Nearly a decade elapsed between the first reports of the disease and an effective treatment for AIDS. Now, Larry notes, more than 40 licensed medicines have been developed that keep the infection in check, and render AIDS a chronic but incurable disease.

“There’s more than enough blame to go around,” Larry says, about those years of controversy, fitful responses, public chaos and desperate patients. “I would fault the public health community and the medical profession for lack of leadership,” he says, “and for communicating in a way that the public could not easily understand, because ‘bodily fluids’ was their way of getting out of using specific technical and physiological words. . . . That caused total confusion, because [people] didn’t know what [the officials] were talking about. For those who did, it inflamed the situation.”

Larry implicates medical and scientific journals, where “misinformation abounded,” he says. Typically, prestigious journals will not print a study that has been printed elsewhere, or even publicly discussed. Further, articles and research findings often wait through a time-consuming selection and peer review process before they are printed. Journalists, and therefore the public, may have no access to what is being studied. “The clamp on information, the journals and their invested interests, worked against society,” Larry says. “It certainly made journalism harder, and didn’t improve the quality of what came out, because some of what was published was wrong, and some of what was right got delayed.”

Delivering the 11th annual James C. Hill Memorial Lecture at the National Institutes of Health in 2015, Larry said, “Doctors and journalists overlooked possible causes; their articles, even those in scientific journals, contained errors and omissions. Arguably, such restrictions [on when journals could report findings] helped delay thinking about and identifying the causative infectious agent. It led some scientists to run down blind alleys.”

The broad and powerful influence over public awareness, as well as medical practices and policies, that results from the practices of medical and scientific journals—so evident in the history of AIDS, which began as an enigma and burgeoned into a horrific pandemic—has been a career-long, passionate concern for Larry. As a venerable journalist, an international lecturer, and a contributor to journals, he has persistently advocated for changes in the publication process that, in his opinion, would advance science and more adequately safeguard the public.

Not only has the delayed release of articles had a chilling effect on the free flow of information and even the direction of scientific inquiry, Larry contends, but it has compromised the public’s right to know about publicly funded research. He has called for improving the peer review process, making it more effective, accountable and transparent. Some changes have occurred because of the effects of the Internet, public criticism, and recommendations from various convened medical and scientific committees. Still unadopted is a basic and obvious reform, Larry asserts: conducting routine audits of data that are submitted by authors, rather than relying on a system of trust. Reforms should continue, he feels, because there is room for improvement.

Today, Larry is a Global Scholar at the Woodrow Wilson International Center for Scholars in Washington, D.C. He is at work on a book that tracks another issue of public importance, on which he broke journalistic ground: the health of our political leaders. “I’m making the case for why political leaders running for office should be transparent about their health,” Larry says, “and doing it through selected cases of those I’ve covered in one way or another.”

In 1972, articles about Senator Thomas Eagleton’s history of depression and therapies to treat the condition were among Larry’s earliest in this strand of reporting. Senator Eagleton ultimately resigned as the vice presidential candidate on the Democratic ticket.

Ronald Reagan was the first candidate for president to give a full interview about his health. Larry interviewed Reagan and was allowed to interview Reagan’s doctors as well. “During the campaign, questions about the state of his memory arose. In the interview, he pledged to resign if he developed dementia while in office,” says Larry.

Larry has attempted to interview both the candidates and their doctors in reporting on this issue over the years. Sometimes candidates refused those interviews, as did Senator John McCain who maintained a longstanding feud with the New York Times. On select other occasions, doctors “were not forthright,” Larry says. “In the 1992 presidential primary campaign, Senator Paul Tsongas and his doctors said that he was cancer-free after a bone marrow transplant for lymphoma. But, as I reported, Mr. Tsongas had experienced a recurrence of lymphoma when his doctors said he had not.”

Larry acknowledges that candidates’ positions and approaches to political issues are most crucial to a voter’s decision, but factors such as a person’s health and ability to sustain the position he seeks are also important. While “no element should disqualify anyone,” Larry states, the electorate deserves transparency about a candidate’s ability to govern as he or she projects.

During his decades of reporting, Larry marshaled the boundless curiosity of a scientist, the empathetic concern of a doctor, and the rigor of a principled journalist, writing with a keen sense of responsibility to the public. He navigated an unlimited flow of possible subject matter, day in and day out, year after eventful year. “At any given time,” he says, “you might be working on a story and want to take more time, and would have to drop the story to pick up some breaking news. That was frustrating: Things were left, not even on the cutting-room floor—it was the pre-writing floor. Newspapers report what is new, or something new about an old situation, but they’re usually not repeating the same information day after day, once
it’s no longer news. That has been the strength and the weakness of journalism.”