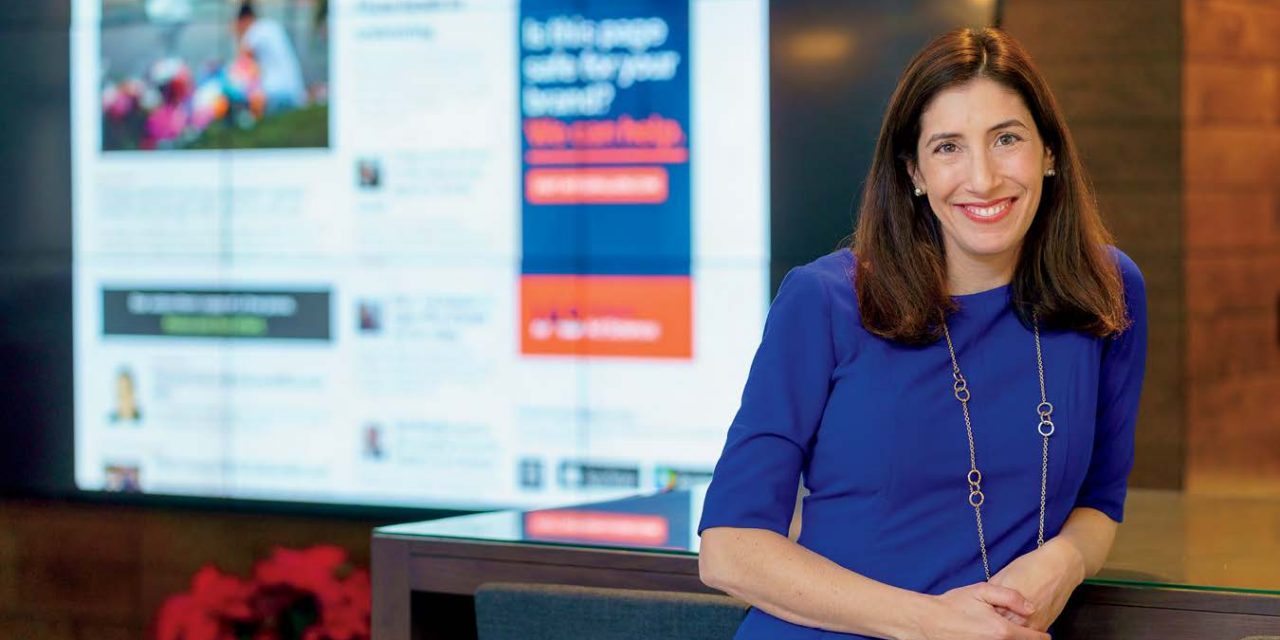 “There’s an old saying in newspapers, ‘Comfort the afflicted and afflict the comfortable,’” says Cynthia Needham, a news editor at the Boston Globe. “Our job as journalists is to chronicle what happened—good, bad or ugly—but also to expose what people aren’t seeing. It is our responsibility to hold people accountable, whether you’re covering a city council of five people in the middle of nowhere, or you’re in the White House press gaggle every day.”

Cynthia focuses on the Globe’s digital product, helping direct the paper’s website and breaking news team. In the Globe newsroom, a live monitor displays the home page of bostonglobe.com at all times. Cynthia and her team watch real-time analytics tallying online readership, which helps them place and follow up on stories in high demand.

“People want substantive journalism,” Cynthia says. “We think a lot about the balance of news we’re giving our readers . . . giving them deeply reported stories of substance, but also the quick, moment-to-moment updates they’ve come to expect from Facebook and Twitter.”

In 2018, the Globe hit 100,000 digital subscriptions—digital readers have access to the full bostonglobe.com site, newspaper archives and multimedia content—a milestone following a boom year in 2017, which saw digital subscriptions rise by more than 25 percent, according to the Boston Business Journal. The Globe’s strong reputation for investigative reporting—by regular staff members as well as the acclaimed Spotlight team—anchors its round-the-clock production of city, regional and national news.

Resources that come with a large newsroom enable reporters not just to report daily happenings, but to put them in context, recognize trends and uncover the relevant broader issues. A reporter covering an isolated story about racist graffiti in a town, for example, can contextualize the incident within an alarming rise of hate crimes in Massachusetts.

Quality, trustworthy coverage is key to any news organization’s success. Among small newspapers, that’s a challenge: an aging print subscriber population means fewer customers, leading to a decline in profitability and newsroom layoffs. Smaller papers struggle to maintain the coverage that readers expect.

Can the digital success of the Globe, or the New York Times and the Washington Post—all three are gaining online subscribers—be replicated across the newspaper industry? Cynthia believes it can, provided that good journalists are available to gather news.

Cynthia was drawn to journalism after watching talented reporters shine light on difficult issues. As a paralegal just out of Bowdoin College, she worked in the Manhattan district attorney’s office, where she assisted prosecutors on homicide and sex-crime cases—many of which garnered press attention. Getting to know the journalists and their work gave Cynthia second thoughts about her plans to go to law school; instead, she attended Columbia University’s Graduate School of Journalism. After graduating, she worked on the city desk at Newsday in New York City and then at the Providence Journal. In Providence, she reported local issues and crime, eventually covering the Rhode Island State House. She joined the staff of the Globe about eight years ago.

Judgment regarding what is or isn’t newsworthy, how stories are reported, and when to exercise restraint is, or at least used to be, an unassailable benefit of a free press. Now, a vocal minority of Americans agree with President Donald Trump when he declares the media “the enemy of the people.”

“It’s a difficult line for a lot of journalists to walk,” Cynthia says. “I came up through the old school of journalism. I honestly believed that you’re not supposed to have an opinion. There are some people who think you shouldn’t even vote if you’re a journalist.”

“At the same time,” she adds, “when you’re being personally attacked and the fundamental principles of what you do are being attacked, to some degree, you can’t not have an opinion. You can’t not defend the principle that liberty of the press is essential to democracy.”

The Boston Globe’s editorial board stood firm against Trump’s declarations in August 2018, leading the editorial boards of about 300 other papers in a coordinated response to say, “Journalists are not the enemy.” The day after the effort was announced, a California man began threatening to kill Globe employees, stating, “You’re the enemy of the people.” He made 14 threatening calls to the newspaper before the FBI arrested him.

Enduring the “fake news” mindset is exhausting but necessary. Criticism of the media is valuable, Cynthia says, but many people view the access to journalists afforded by social media and email as an opportunity for unsubstantiated and often personal attacks. Sometimes the reaction is provoked only by a headline, not the content of a story.

Even if a reader is screaming at a reporter on the phone, unless the story contains a factual error, the reporter is conditioned to respond that their work speaks for itself. Only recently, Cynthia says, have journalists begun documenting and speaking up about some of the hate they receive.

“The discourse surrounding journalism has, in my opinion, become angrier, regardless of what’s being covered, but the role of journalism is still critically important. All we have is the public’s trust,” Cynthia says. “If people are going to pay for what you’re doing, they have to be able to trust you . . . . A society without a vigorous free press is not a pretty place to be.”