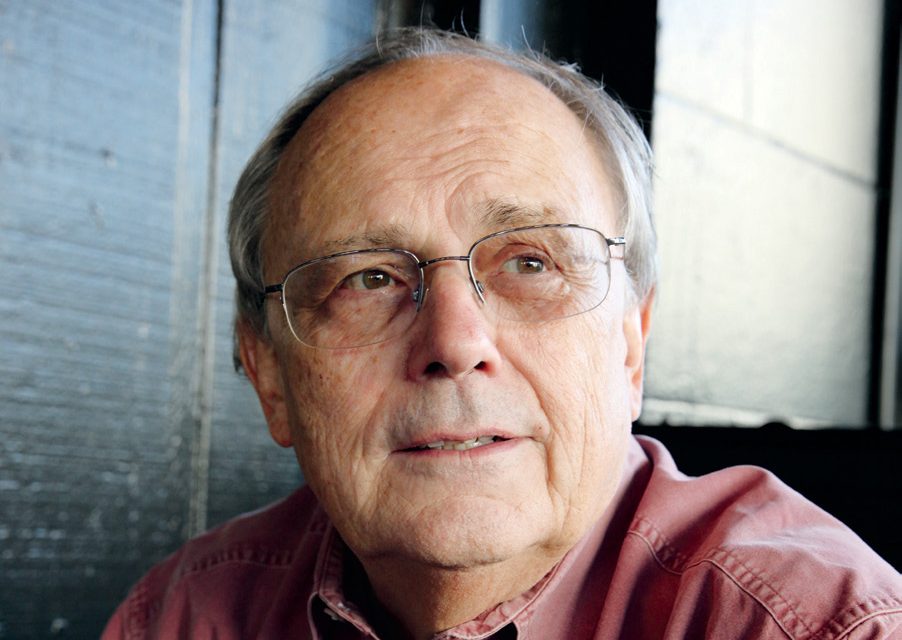 After more than three decades advocating for the nation’s elderly, Scott Parkin believes that although progress has been made around aging issues, much more needs to be done.

“It’s really pretty scary,” says Scott, who spent much of his career at nonprofit organizations helping educate seniors about their benefits and advocating for greater elderly protections and funding for essential programs.

The facts bear out his concern: According to the Bureau of Labor Statistics, the average annual income of households led by individuals 65 or older is $48,000, and a 2015 analysis by the Government Accountability Office estimates that the median retirement savings for Americans aged 65 to 74 is $148,000.

Asked about the recent spate of commercials featuring contented seniors with their financial advisors planning retirements filled with travel and new adventures, Scott looks dismayed. “Most of us don’t realize that there are so many people who didn’t do well, who didn’t perhaps get a decent education, who weren’t able to save money, often through no fault of their own. They may have had a sick child,” he says.

“The median Social Security benefit is around $1,500 a month,” he adds. “Try living on that and nothing else. If you don’t have any savings — even if you have $150,000 in savings, which may be drawing down 8 percent a year — you’re not going to be doing too well.”

In the 1970s, Scott lived in Maine, first reporting for the weekly York County Coast Star and later as editor of the Coastal Journal and a Guide to Maine. From 1979 to 1981, he was a reporter for the Lewiston Daily Sun. He started writing about aging issues after moving in 1982 from Maine to Washington, D.C., where he worked for Blue Cross and Blue Shield’s federal employee program.

“With Blue Cross and Blue Shield, I learned how to write in plain language,” Scott says. “I learned a technique of translating very technical or legal language into something you and I might understand for its 4 million retiree subscribers. The insurance industry needed that then and needs it now.”

He later served for more than a decade as vice president of communications at the American Association of Homes and Services for the Aging (AAHSA), an organization that represented only nonprofit nursing homes, retirement communities, and senior housing with services. There he promoted and saw the growth of ethics committees in long-term care, which until then were found in hospitals but rarely in nursing homes.

At AAHSA, now called Leading Age, he also led annual public affairs initiatives to block efforts to cut federal funding for affordable housing for the elderly. In addition, a report edited by Scott, Nine Ways the Budget Hurts Older Americans, resulted in his organizing a meeting of aging-organization leaders with President Bill Clinton, who had read the report. (The proposed legislation was ultimately defeated.) 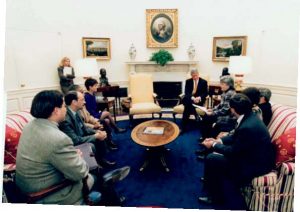 Scott (on right, in front) with aging-organization leaders at a meeting in 1995 with President Bill Clinton to discuss a report on the damaging impact on older Americans of Congress’s budget.

Scott later served as vice president of the National Council on Aging, where he helped launch BenefitsCheckUp, a website tool that over the years has allowed more than 8 million seniors to learn about and apply for government benefits programs. His last job in the field was with Justice In Aging. He was the nonprofit organization’s first communications director. “It was a great place to end my career,” he says. “The causes they get behind, such as strengthening nursing home rules and protecting Medicaid and the Supplemental Security Income programs for the elderly poor, remain very important to me.”

As baby boomers move into retirement at a rate of approximately 10,000 a day, Scott believes that two issues threaten the future economic stability of many seniors and their families: a lack of affordable housing and the astronomical cost of long-term care.

According to a recent government report, as housing costs have risen precipitously in recent years, the share of older households paying more than 30 percent of their income on housing is projected to soon rise to 50 percent. And the number of homeless seniors is also growing.

In June, the U.S. House of Representatives voted to appropriate $803 million for the Section 202 Housing for the Elderly Program. This would be the largest amount dedicated to building more affordable housing for low-income seniors since 2010. From 2017 to 2019, Congress provided only $166 million in total to the program.

“In the old days, we were regularly getting significant funding every year for the program,” Scott says, “but interest in building more affordable housing has dwindled.” This means that waiting lists are often years long. “Congress should consistently appropriate a lot more money to help develop — whether it’s nonprofit or for-profit — affordable housing for poor seniors,” he says. “There’s a lot of affordable housing being built, but it’s not necessarily for older adults.”

Long-term care, the other issue that threatens to undermine the economic stability of families, is one that no one wants to talk about, he says, even though its cost can devastate individuals or families. “It’s something people just don’t know about or just don’t want to think about until it hits them square in the face.

“It’s frightening, because by the time someone arrives at a point where they understand what it costs — when they’re taking care of either a parent or a spouse — they’re already in their 70s,” Scott says. “They thought that perhaps Medicare would be helping — and it does help if you need short-term rehabilitation, but not with long-term care either at home, in assisted living, or in a nursing home.

“There’s really nothing other than impoverishment for many people confronted with those costs,” because of this, Scott adds, “and it’s a failure of our political system not to address the problem. There are policy solutions, but there’s been a reluctance over the years to come up with a federal program.

“And it really hasn’t made a difference who’s been in power. In late 1988, during the Reagan administration, Congress passed the Medicare Catastrophic Care Act, which addressed long-term care, but it was repealed after many seniors thought its costs were too high,” he says. “It was a great idea, but it was poorly communicated.”

More recently, the Affordable Care Act, created under the Obama administration, at one point included a home and community-based services benefit that would have covered the kinds of services that keep people in their own homes. The administration did not implement it, however, out of fear of future costs. “Another opportunity lost,” Scott notes.

And for a few decades, the long-term care insurance market grew. Scott, who drafted the first Consumers Guide to Long Term Care Insurance, says the market could have helped those who could afford the premiums, but as insurance companies began to pay claims and realized the risk to their bottom lines, most of them stopped selling it.

Retired for the past five years, Scott and his wife, Joyce, continue to live outside Washington, in Reston, Virginia, where he stays active with writing, painting, and drawing classes and taking part in writers and life-drawing groups. They return every year to Maine, where Scott’s father’s family is from. They have two grown children, a son who lives in Washington, D.C., and a daughter who lives in Golden, Colorado.

Scott’s ties to Milton remain strong; he has served on several reunion committees over the years. “I have great admiration for how the school and campus have grown and changed,” he says, recalling that in his time, “the theater was a repurposed building with windows on three sides, the art studio was primitive, and the library collection was small.”

Nevertheless, he says, “I can trace my love of writing, literature, theater, painting, music, political science, history, and a lifelong interest in social justice to my Milton experience.”

He also has fond memories of sitting on the library floor listening to a lecture by Buckminster Fuller or Robert Oppenheimer, and he remembers that “Sunday night chapel was always the week’s highlight, because after the service I could walk a girl I liked back to her dorm.”

In retirement, he has continued to advocate for the elderly. Only recently did he step down as a member of the board of directors for a local nonprofit that provides affordable housing to low-income older adults.

Although Scott remains hopeful that attention to aging issues will improve, he is disappointed at the pace of progress. And with newspapers and journalists dedicated to those issues fast disappearing, he worries that awareness of problems in housing and long-term care will only lessen.

“So much that happens in this country happens when there’s a crisis, and these kinds of issues are going to be pretty big,” he says. “Unfortunately, solving the problems confronting the elderly will not happen quickly.”

He recalls a recent visit he and his wife made to the Maine Maritime Museum in Bath, where they learned how the United States mobilized as it prepared to enter World War II — cranking out 17 destroyers a month: “You say, ‘What, how is that even possible?’

“The country can do things if it wants to or feels it must. I just don’t think that we feel we must help poor, sick, homeless, or dying seniors. I don’t think there’s that urgency around housing or long-term care, even though almost every family will have to confront at least one of these issues sooner or later.”